A clear message was sent to Texas oil company Anadarko on Saturday as more than 600 impassioned environmentalists gathered on coastal Otago beaches to protest against deep-sea oil drilling. 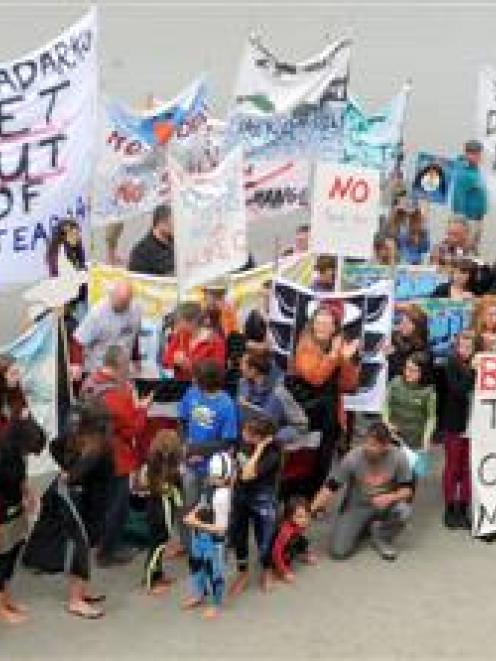 Hundreds of people at St Clair Beach in Dunedin on Saturday protest against deep-sea drilling. Photo by Craig Baxter.
A crucified albatross, dozens of banners and a rousing haka were used by hundreds of protesters lining Dunedin's St Clair Beach to show they were united in their opposition.

The initial gathering of about 300 protesters swelled to more than 500, Oil Free Otago representatives said.

A passerby asked protesters if they had driven vehicles to the beach, and called them hypocrites when they said yes.

Volunteers collected signatures for a Green Party petition against deep-sea drilling, and fish and chips were served en masse for lunch.

There were calls for the Government to invest in ''clean and green'' energy, and to keep New Zealand's pristine reputation intact.

The protest was one of many organised simultaneously throughout the South Island on Saturday, as part of Greenpeace's Banners on the Beach campaign.

About 60 protesters at Friendly Bay, in Oamaru, argued deep-sea drilling for oil off the Otago coast would merely prolong a ''dying culture''.

The large separation between mechanical controls on the surface and drilling mechanisms on the ocean floor meant there could still be a ''blow-out'' that could spill oil.

He said oil use was ''short-term gain for long-term pain'' and believed people had about 20 years to stop all carbon going into the atmosphere before the increase in temperatures would become irreversible.

However, he said it was not feasible to stop all carbon use tomorrow. The transition away from carbon would be an enormous task and public support would have to be greater to get New Zealand away from oil dependency, he said.

He believed 2000 protesters would be needed at Moeraki, 10,000 at Dunedin and 100,000 at an Auckland protest to make an impact on decision making.