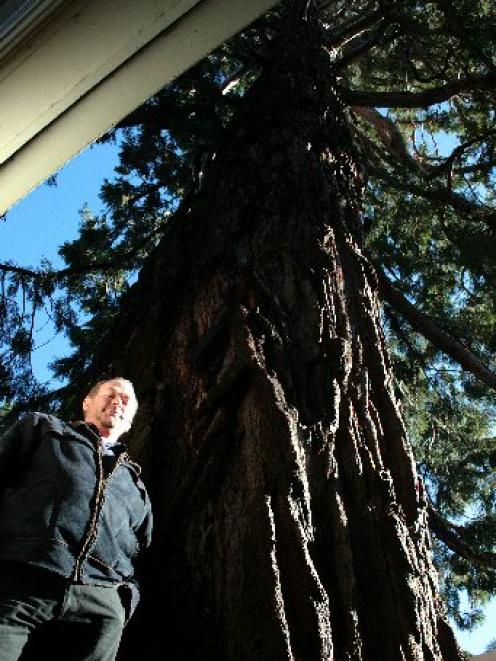 Pact property manager Ferdi Koen demonstrates the size of the gigantic wellingtonia tree growing out of a small central courtyard right in the middle of one of its care homes for people with intellectual disabilities. Photo by Dan Hutchinson.
The Dunedin City Council's policy towards trees is being put to the test as councillors try to decide what should take priority - a huge, healthy, century-old specimen tree or the house that was built around it 20 years ago.

Pact property manager Ferdi Koen has the mother of all tree problems to deal with: a 27m wellingtonia that grows straight out of a courtyard in the centre of its residential care facility in Wakari.

The stunning tree is more than 100 years old, grows straight and true and is healthy, but it might have to get the chop 850 years before its time.

Pact - a housing and care provider for people with intellectual disabilities - has applied for a resource consent to remove the tree, which is listed on the schedule of protected trees but is looming large over its 12 resident clients.

Dunedin City Council trees officer Aidan Battrick told a committee considering the issue yesterday that the oldest trees of its type lived for about 3000 years in the United States but would live for only 1000 years in New Zealand.

The house beneath the tree was built in 1952 and then converted to a rest-home in 1989. The large tree was enclosed by an addition in 1992.

Mr Koen could not understand why the addition was built around the tree because of the obvious problems that it would cause later.

He said Pact wanted the tree gone because of the mess it created and the potential safety problems. A low branch fell off in 2012, resulting in some tiles being damaged.

Mr Battrick said the wellingtonia (Sequoiadendron giganteum) was a very stable tree and not likely to fall over.

Council planner Amy Young said she could not recommend a course of action because it was unclear what damage had already been caused to the building.

She said it was a balance between removing a tree with wider landscape values to the surrounding area and avoiding damage to the building.

An engineer's report stated that removing the tree could actually cause more damage to the foundations because when the roots rotted away, they would leave cavities.

Mr Koen said they were spending $15,000 every three or four years on carpet cleaning to prevent mould caused by blocked gutters and moisture getting into the walls and under the floor.

He said the building was in shade a lot of the time and they also needed to spend $200,000 on the site to upgrade bathrooms to wheelchair standard.

One option they were considering was building a purpose-built facility, but they might not have the funds for that for another 20 years.