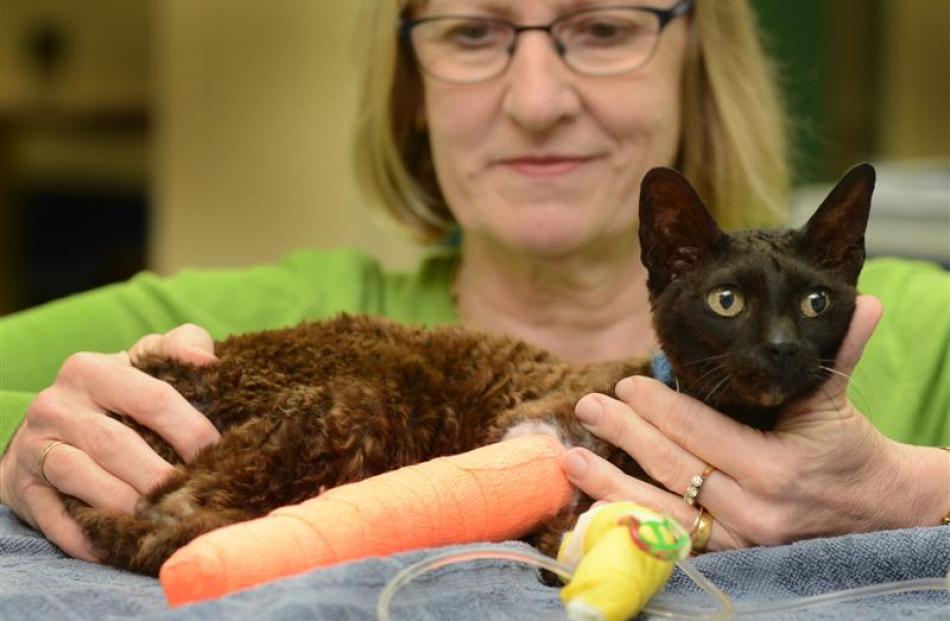 A heavily bandaged Mia, with her owner Boo Moore, after the cat got caught in a gin trap. Photo by Peter McIntosh. 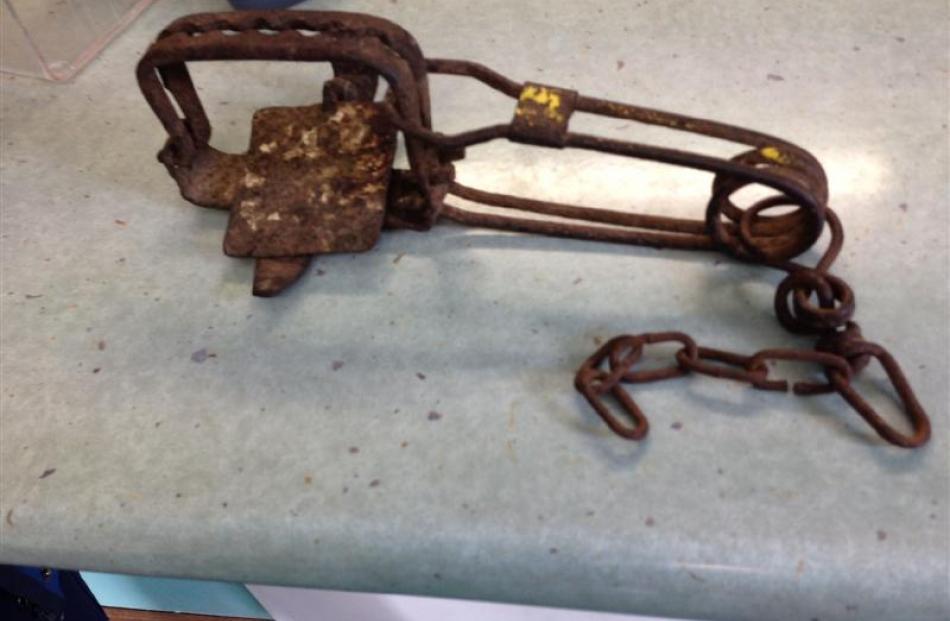 A cat suffered up to two days' agony after her leg was crushed and broken in a prohibited gin trap in Dunedin, and her owners want to make sure other cats do not end up in the same situation.

Mia, the 11-year-old Cornish Rex purebred, was found beside rural North Rd yesterday, after going missing on Friday and having apparently dragged the trap about 150m.

Mia was yesterday hooked up to a drip, on pain medication and had her leg bandaged, at the Gardens Veterinary Clinic.

The leg may have to be amputated.

The trap's owner said it had been set up next to a hole in his chicken run to trap rats and ferrets that were killing his birds, and he wanted it back.

Boo Moore said the cat went missing last Friday evening, and she and her husband, Graham, searched during the weekend for ''the little cat with a tiny cry'' she said was not a wanderer.

On Monday, after ringing the Otago Daily Times to place a classified advertisement to help find the cat, the couple were walking their dog, when they stopped to take a phone call, and heard the cat.

Mia was weak and dehydrated, in obvious pain, with her leg three or four times its usual size, and covered with maggots.

Mr Moore managed to open the trap and release her.

The Moores' neighbour, Ken Pearson, had visited and asked for his trap back yesterday, but Mrs Moore had refused, and passed it to the SPCA.

Asked if the cat got caught in his trap, he said, ''I would imagine.''

Mr Pearson said he knew the traps were frowned upon, but did not know if they were illegal.

He bred chickens, and had been ''furiously'' catching rats by leaving the trap next to a hole in his chicken run.

From the road, it was about 150m to the chickens.

''That cat has gone up through my place, into my hen run, through the hole that the rat gets through, that is big enough for a cat, and got caught.

Mr Pearson said ferrets and rats were so big they had been eating the sides of hens on their perches.

Rat traps available in shops were not strong enough to stop large rats.

''The rats just laugh at them.

The SPCA was yesterday investigating the incident.

A spokeswoman said traps like the one photographed were ''prohibited'', and fines could be levied for their use.