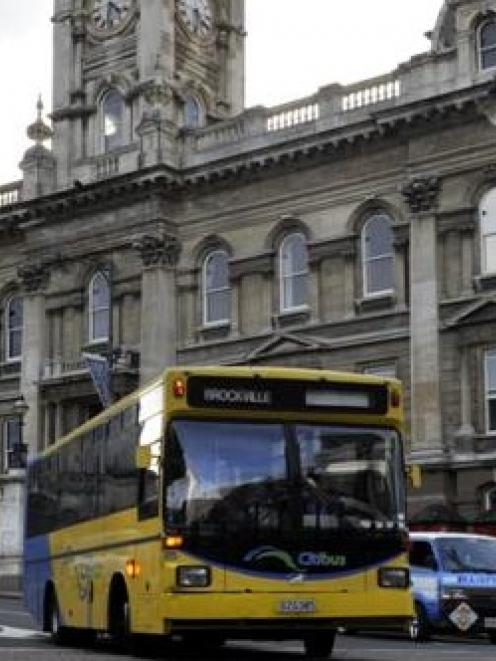 citibus_110411_2_medium_jpg_4da2ec0aef.JPG
The sale of underperforming Dunedin City Council company Citibus Ltd - which has lost $800,000 in the past two years - has been revealed as the topic of last week's controversial non-public council meeting.

However, it remains unclear whether the company is in the process of being sold, and Dunedin Mayor Dave Cull has again refused to comment on "speculation" ahead of a possible announcement next week.

The meeting was held with the public excluded last Monday, amid allegations by Cr Lee Vandervis of illegal and immoral behaviour which culminated in him walking out towards the end of the meeting.

Councillors were sworn to secrecy and Mr Cull refused to discuss the meeting immediately afterwards, citing "considerable commercial sensitivity". That sensitivity meant nothing further could be revealed for a fortnight, he said.

However, the Otago Daily Times learned yesterday the meeting was called to discuss selling Citibus, the council-owned bus company.

It was not known what decisions were made, and minutes released late last week showed only that a single item relating to "Dunedin City Holdings Ltd matters" was discussed, with the public excluded.

DCHL is the council's parent company for a group including Citibus and five other companies.

That meant a loss of $806,000 over two years, while the company also owed $4.05 million to Dunedin City Treasury, DCHL's financial services arm, as of December 31, the six-month results released in March showed.

DCHL chairman Paul Hudson could not be contacted late yesterday, but told The Star the loss of the contracts, together worth about 20% of the company's business, was "a concern".

However, Mr Cull would not be drawn yesterday when asked to confirm whether the sale of Citibus was discussed at last week's meeting."I can't confirm anything and I can't comment on it. My position, as [that of] all councillors will be, is that the issue that we discussed is confidential for very good reasons," the mayor said yesterday.

"We won't be making any comment until such time as that's no longer the case."

Last week's meeting remained commercially sensitive, and would be so for another week, when there could "quite possibly" be an announcement "depending on what transpires", he said.

In January, rival bus company operator Kayne Baas, the director of Dunedin Passenger Transport, expressed a desire to buy the company and return it to profitability.

Contacted yesterday, he said he knew "absolutely nothing" about any deal, and insisted: "They haven't spoken to us."

The prospect of council asset sales was also raised by Cr Kate Wilson in January this year, ahead of pre-draft annual plan deliberations, as one way of helping reduce forecast rates increases.

She declined to comment yesterday when asked about a possible sale of Citibus.

Cr Vandervis said when contacted he would "like to" divulge details of last week's meeting, but conceded there might be genuine reasons of commercial sensitivity for withholding the information.