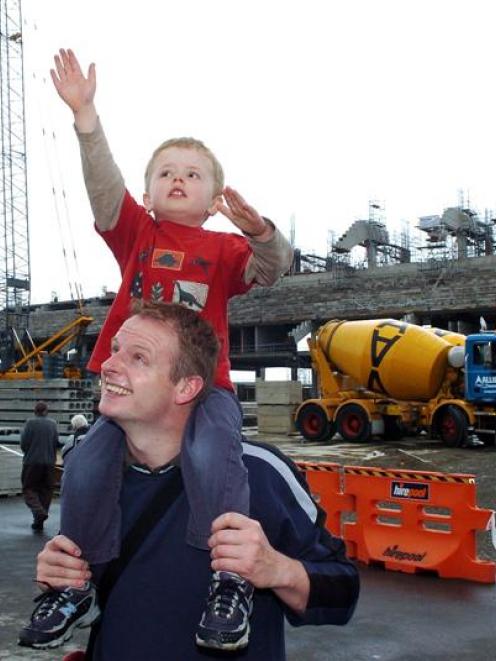 Oliver Hobbs (3), with father Tom, stretches towards one of the cranes on site at Forsyth Barr Stadium during a family fun day yesterday. Photo by Gerard O'Brien.
Whether there to see how ratepayer money was being spent or to look at the big machines involved in the construction of Forsyth Barr Stadium, the Dunedin public turned up in their droves.

The stadium construction site was open to the public yesterday with about 2100 people showing up to see progress on the $198 million stadium, which is partly funded by Dunedin ratepayers.

"I wanted to see what they were spending my money on," Gwenda Farquharson said.

For Grant Kelly it was the perfect photograph opportunity.

"It's impressive, far more impressive than I thought."

Carisbrook Stadium Trust chief executive David Davies said he was encouraged by the interest, highlighted by the first person turning up at 9.30am for the planned 11am start.

They let people in at 10am.

"I didn't think we'd get that many given the weather and the cancellation of the Santa Parade but it didn't stop people. People were very keen."

Comments were positive with many questions asked about the roof membrane, the playing surface and the grass mix, he said.

The Rotary Club of Dunedin, which had about 50 members on site, did a great job at staffing the day and he was grateful to Hawkins Construction for enabling the public to get on site, Mr Davies said.

Rotary Club of Dunedin president Malcolm Dixon said about $4000 had been raised, with the proceeds going towards books in schools and youth initiatives.