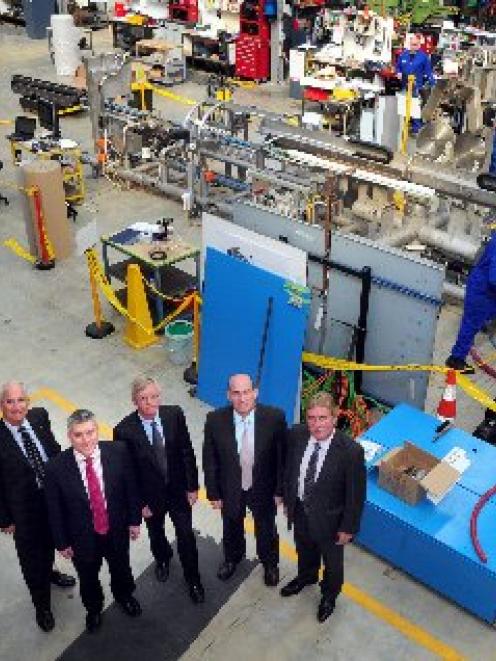 In March, the Wesley Church in Wellington was packed for the funeral of a great New Zealander, Sir Paul Callaghan.

As well as being a brilliant physicist and science communicator, Paul Callaghan thought deeply about the future of this country.

In his book Wool to Weta, Prof Callaghan lamented that "New Zealanders choose to be poorer than other nations because we choose to work in low-wage activities".

He fretted about the emigration of so many talented young people, including both of his own children.

In his view, there is an urgent need for New Zealand to supplement its traditional land-based economy with high-technology companies based on research and development.

The potential is clear, because New Zealanders have a fine record of innovation based on scientific knowledge and research.

Hi-tech companies are relatively immune from two great handicaps for New Zealand manufacturing: the tyranny of distance from major markets and the lack of a large population on our doorstep.

Hi-tech companies can achieve efficiencies which are not so dependent on scale, and they may win a unique market position.

Such businesses can grow much more quickly than agriculture or tourism ventures. And they can do so without damaging the urban or natural environment.

The TIN100 Report is a regular publication, sponsored by government ministries, which benchmarks the performance of New Zealand's largest "globally focused technology companies".

To be included, such companies must have originated in New Zealand, have at least 10% of their revenue outside this country, and be in one of three sectors: information technology and software development, hi-tech manufacturing, or biotechnology.

An attempt is made to include all companies that qualify, not simply those that wish to be included.

Their export revenue ($5.1 billion) already exceeds that from meat exports.

This is the fastest growing part of the New Zealand economy.

This rightly notes that successful small cities, such as Cambridge in England and Kingston in Canada, have a "focus on high-value science, technology and research and development-driven industries", with "strong networks within and between industry and academia for innovation".

As we watch older industries such as the railway workshops decline, we should take heart from the fact that our traditional handicaps - distance from markets and a small population base - are far less significant for businesses based on research and innovation.

In this respect Dunedin has even more to gain than New Zealand as a whole.

So how are we doing? This is where I got a big shock when I read the latest TIN100 Report.

Of the top 100 companies, ranked according to revenue, only two (Scott Technology - No 32, and ADInstruments - No 50) are based in Dunedin.

There are no fewer than 52 in Auckland, 19 in Christchurch, 11 in Wellington, 7 in Hamilton, 2 in New Plymouth, and one each in seven other places (including Timaru, Katikati, and Whangarei).

The report lists only another four Dunedin companies in the 101-200 rankings: Escea, Animation Research, DC Ross, and TracPlus Global.

No doubt details of the TIN100 rankings could be challenged - but it is difficult to escape the conclusion that Dunedin is lagging drastically behind other main centres in this sector of the economy, so crucial for the future of New Zealand.

Prof Callaghan quoted an American expert in concluding that "successful technology business clusters tend to form in the vicinities of excellent universities where the environment is conducive to graduates wanting to continue to live in the vicinity".

Otago is New Zealand's most research-intensive university, and one of the two largest research institutions in the country.

Interestingly, Palmerston North is one of the centres having only one company in the TIN100, despite hosting a large research university and Crown research institutes.

Are there things about Dunedin and Palmerston North that turn young entrepreneurs away?

Dunedin has many assets, including a superb natural setting, a hinterland offering world-class outdoor activities, a temperate climate (though often maligned), and a wonderful heritage of culture and learning.

More than 20,000 tertiary students live in this city; attending alumni functions around the world, I kept meeting graduates who regarded their years in Dunedin as the best in their lives.

So why do so few remain here or return to set up businesses and raise their families?

I am convinced one of the main reasons is a longstanding culture of negativity.

Several years ago, while international consultants were advising on the future of our campus, one of them remarked that the greatest threat to our university was the evident lack of ambition in the city.

When the Dunedin City Council and Otago Regional Council did take a bold step - to build the Forsyth Barr Stadium - they encountered not only robust debate, which was healthy, but also a seemingly endless torrent of negativity.

While other centres envy the stadium and consider how to replicate it, it is a sad fact that some of our citizens would actually rather see it fail.

There is constant bickering about matters such as whether there was a cost overrun of 4% on the original budget.

What a contrast to the spirit of the pioneers who established a university only 21 years after the John Wickliffe berthed at Port Chalmers.

While our councillors are distracted by such matters, other local authorities have well advanced plans for developing precincts for innovation such as the Wynyard Quarter in Auckland and a new hi-tech business hub in Christchurch. Central Government is contributing to these ventures.

ADInstruments is the most successful spin-out company from the University of Otago.

We seldom hear about it because, being a private company, it doesn't need to release "good news" stories to attract money from investors. But have a look at its website, to see its range of products and offices around the globe.

It was wonderful to hear recently that this company plans to renovate the historic Donald Reid warehouse building, giving a much needed impetus to the suggestion of promoting a creative quarter in the old warehouse precinct south of Queens Gardens.

Yet the plan to develop this precinct by altering road traffic arrangements was greeted with the usual whingeing and negativity.

Many of us who love Dunedin believe this is achievable.

But the report fails to acknowledge how far we have fallen behind, so that urgent action is critical.

The report keeps saying that "Dunedin faces the risk of losing business and people to other cities".

Wouldn't it be better to acknowledge that this is already happening?

It is easy to show that, without the dramatic expansion of the University of Otago over the last 20 years, Dunedin's population would have shrunk to well under 100,000.

We can't rely on continued tertiary expansion: that may happen, but I can think of plausible changes in Government policy that could lead to a rapid fall in the student population.

The future health of the university also depends on having a vibrant business environment, especially in the hi-tech area.

No great research university today can be found in a backwater.

I hope our civic leaders will stop arguing over trivia and confront the real crisis facing Dunedin. Otherwise we will find that all the "get-up-and-go" has "got-up-and-gone".

David Skegg is a former vice-chancellor of the University of Otago. He chairs the Government's Science Board.