Families united in support of neurosurgery 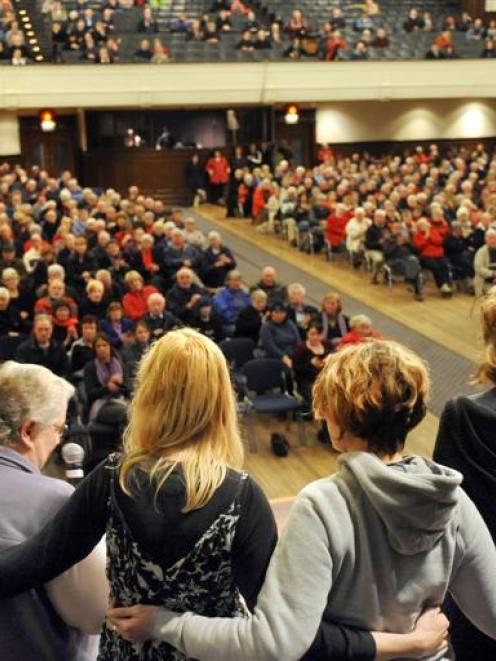 And while some struggled to find the words before about 1100 people in the Dunedin Town Hall, the message was unmistakable: neurosurgery services must remain in Dunedin.

As Lianne Latta, of Owaka, put it, "People in the South roll their Rs.

"We are special. We are worth it. We are entitled to it.

"Neurosurgery must stay in Dunedin."

She was one of about a dozen patients or their family members who relayed their personal stories, voicing the patient concerns which panel chairwoman Anne Kolbe earlier told the meeting had been identified from feedback on the issue so far.

These included distance, costs, the impact of dislocation on friends and family and the clinical impacts of delay.

Ms Latta said when her 8- month-old son had to undergo surgery in 1992 for a brain tumour, he might never have survived the trip to Christchurch.

It was hard to explain the feeling when your baby was taken for surgery knowing he had only a small chance of survival: it was like her "heart being torn out slowly".

She would never have coped without the support of friends and family.

Linda Dallas, also of Owaka, said her 15-year-old daughter Samantha suffered a head injury in an accident in 2006 at Romahapa and was flown to Dunedin Hospital.

She would not have made it if she had been required to travel to Christchurch.

Family had been able to spend 12-14 hours a day with her during her lengthy rehabilitation in the Isis rehabilitation centre, something which would not have been possible if she had been in Christchurch.

Today, she was a 19-year-old getting on with life.

Without Isis, she would have been "little more than a vegetable".

She had to learn to walk, talk, eat and drink and other skills needed for living.

Gerald Somerville, who was brought to Dunedin Hospital 18 years ago by helicopter for emergency brain surgery, asked for costs to be fully considered.

He said if his treatment had been delayed, instead of his accident costing $1.5 million it would have cost a further $4 million as he would have needed 24-hour care for the rest of his life.

Suzanne Campbell, who underwent neurosurgery in Dunedin at the same time as her infant son required cardiac surgery in Auckland, said she was "afraid to think" what it would have been like had she been required to go to Christchurch.

The general population did not have years of training preparing for a medical crisis and "in the thick of it", all they had was their support, which in her case was her faith and her family.

Beginning the meeting, chairman Murray Kirkness, the Otago Daily Times editor, drew the first spontaneous applause when he said the South was entitled to patient-centred health services, and a neurosurgery service with four consultants in Christchurch and two in Dunedin was "the best possible deal".

The meeting was the first public outing of the panel which also includes consumer advocate David Russell and Adelaide neurosurgeon Glenn McCulloch.

Mrs Kolbe told the meeting solutions would come from the clinicians and the communities of the South Island.

The solution would have to be South Island specific.

The panel could not take a "model and dump it in" and expect it to work.

Southern District Health Board member Richard Thomson, who is one of the organisers of the Keep Neurosurgery In Dunedin Facebook site, urged the panel to opt for the two-site model, putting in an interim governance structure, with an independent chairman to help "overcome the differences which will follow this debate".

Fellow facebook site organiser Associate Prof Samuel Mann outlined the concerns raised through the site, pointing out that comments, if printed out, would run to 240 pages.

At the end of the meeting, which ran over the scheduled one hour, Mr Kirkness read a statement from Otago-Southland Employers' Association chief executive John Scandrett emphasising the importance of the service to the economic wellbeing of the city.

Drawing the meeting to a close, Mr Kirkness said he did not envy the panel its job "but it's a pretty simple answer".

Intensivist Mike Hunter, who has been particularly outspoken in his advocacy for the retention of the service, was given a standing ovation by much of the crowd when Mr Kirkness drew attention to his presence in the audience.

After the meeting, Mrs Kolbe said she and the panel had spent the day with a variety of health professionals at Dunedin Hospital.

Mr McCulloch said he had been surprised at the cohesive way the neurosurgery unit was still functioning, despite the great difficulties it had without permanent neurosurgeons.

There was great "esprit de corps".

Mrs Kolbe also commented on the enormous effort which had been made to keep the unit running so effectively.

The panel will meet civic leaders today before spending a day in Christchurch tomorrow.

On Thursday, it will travel to Invercargill where it will attend part of the Southern District Health Board's meeting before attending a public meeting at Stadium Southland at 2pm.