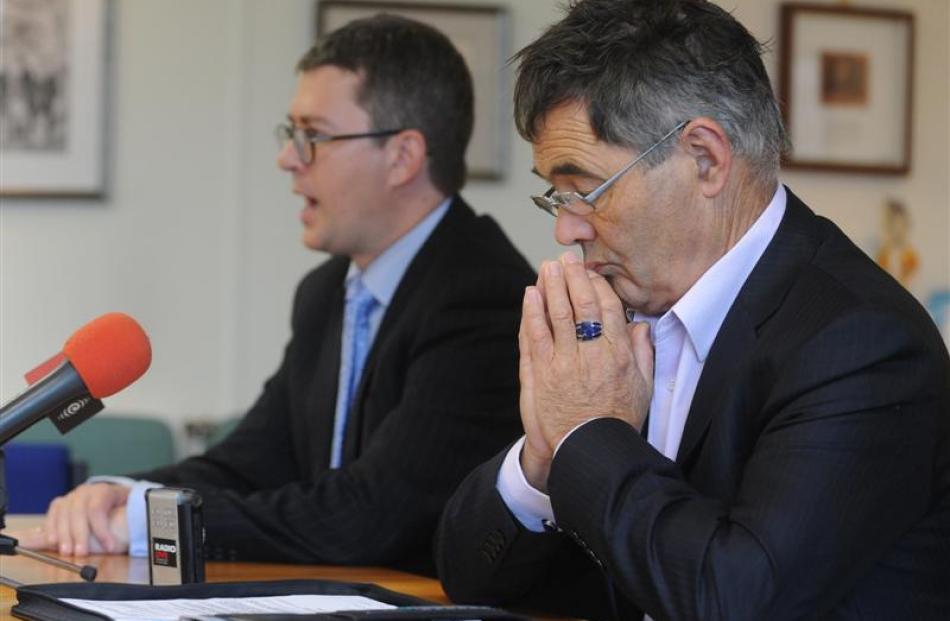 Dunedin Mayor Dave Cull and chief executive Paul Orders (background) at a press conference to announce a review into the final cost of the Forsyth Barr Stadium. Photo by Craig Baxter.

Carisbrook Stadium Trust chairman Malcolm Farry - the man who promised the Forsyth Barr Stadium would be built "on time and on budget" - insists he has delivered.

That was despite Dunedin Mayor Dave Cull announcing an independent review of the stadium's final cost yesterday, amid concerns the budget may have been blown by millions of dollars.

Confirmation of the review by Pricewaterhouse Coopers (PWC) was greeted as "wonderful news" by former Stop the Stadium president Bev Butler yesterday, although she hoped the examination would eventually go further.

However, Mr Farry told the Otago Daily Times he was confident the trust had stuck to agreed budgets, although he left the door open to the possibility of cost increases from within other parts of the project.

"We are in no doubt whatsoever that the [trust's] agreed budget has been complied with, and there is no question about that.

"If there are price increases, it is not part of our role in the project. The CST kept within the agreed budget."

Asked for his reaction to news of the review, Mr Farry said it was one of "surprise in the first instance".

"Particularly as it appears to cast aspersions on everyone."

The trust would be "happy" to co-operate fully with the PWC review, although it would not be the only party involved in the stadium project to do so, Mr Farry said.

He said the trust's reports had been accurate and the process "simple and transparent", but said an independent review was appropriate "if the DCC is unclear about it".

"The PWC review will have no difficulty in confirming that."

Requests for comment from Dunedin Venues Management Ltd - the company running the stadium - were referred to board chairman Sir John Hansen, who would only say the company would also "fully co-operate" with the review.

"Other than that, we have no comment to make."

However, University of Otago chief executive John Patrick confirmed cost-sharing with the council over the University Plaza remained an "outstanding matter".

The two parties had signed a development deed as part of the project to work together and share costs, but exactly who paid what still needed to be resolved as part of a "final wash-up", he confirmed.

The stadium project was a "very significant undertaking" and involved a high level of collaboration between the university and council, including a number of shared costs, he said.

"A post-project review does not seem inappropriate and does not surprise us."

Mr Patrick and university property services director Barry MacKay would be involved in the review, and would be "happy to discuss any aspect" of the project with PWC staff, he said.

Ms Butler said she hoped the review would lead to a wider examination of the project, its finances and the decisions that led to its construction.

"I see it as a first step . . . Things have to be done and seen to be done properly if people are to be brought to account."

However, she was "absolutely delighted" to hear news of the review yesterday.

"It's been something we've been working towards," she said.

She wanted to know more about the review's terms of reference, and had requested a meeting with the PWC review team to provide them with information she had obtained through numerous official information requests.

"I think it will give some confidence in the independence of the process if key players from both sides are given an opportunity to meet with them."

Asked what she thought the final cost would be, Ms Butler said she didn't know, but expected the increase would be "more than just a million or two".

"I would expect that if they included all the costs, that it will be tens of millions more," she said.