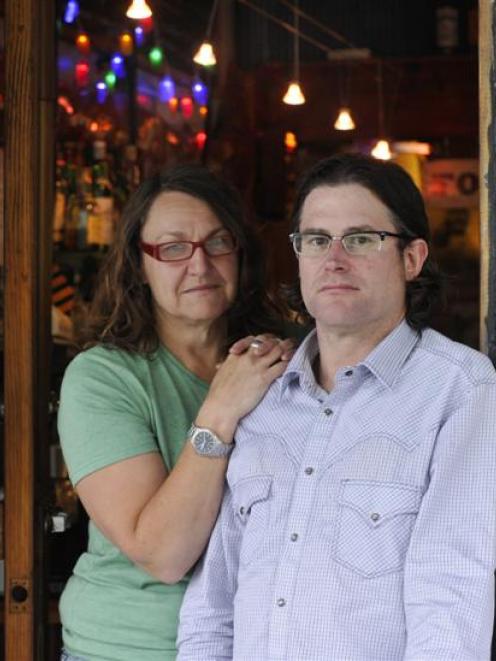 Inch Bar owners Sandra Kellian and Jon Simcock yesterday. Photo by Gerard O'Brien.
A North Dunedin bar owner says he fears for his safety because his business is being labelled a gay bar by the Dunedin City Council's i-Site Visitor Centre.

Inch Bar owner Jon Simcock said patrons and staff had been abused since the bar at the Gardens started being promoted as a gay bar by i-Site staff two years ago.

"I spoke to them then and was given assurances it would stop," he said yesterday.

However, the matter came to a head last week when customers and Mr Simcock were abused and called "homo faggots" by a passing motorist.

"I'm totally flabbergasted and aghast anyone would carry on like that.

"It's an indictment on the city," Mr Simcock said.

"But the abuse has been getting more frequent ...

"I'm just waiting for the day someone burns the place down or I get beaten up."

The Inch Bar started life as the Homo Espresso coffee bar, when it was opened by Maurice Ellis in 1992.

However, it was not "and never had been" a gay bar, Mr Simcock said.

"It's really embarrassing when gay couples do come down, because they're looking for an experience we can't provide."

"I popped into the information centre on Friday and asked if there were any specific gay bars in Dunedin and the woman circled the Inch Bar.

"I said: `Well, I'm the owner of the Inch Bar and I can tell you categorically it is not and never has been a gay bar'.

"She just looked at me blankly," Ms Kellian said.

An email had been sent to staff advising the Inch Bar was not a gay bar, he said yesterday.

"I apologised profusely on behalf of council and hope the matter is now resolved," Mr Strang said.