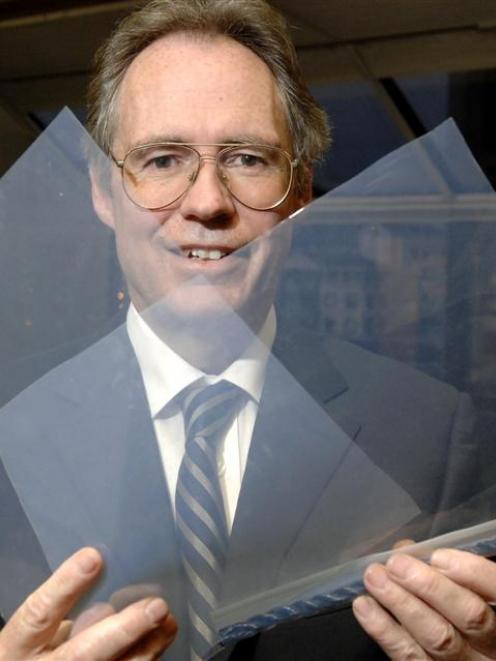 But, despite their appearance, Dunedin City Council chief executive Jim Harland has declared he has full confidence the roofing material will withstand Dunedin's howling southerly winds.

Mr Harland was given the offcuts from the stadium's actual roofing material during a recent visit to the Beijing factory where it was being joined.

The material would provide the roof's cladding, and was made from a transparent high-tech thermoplastic called ethylene tetrafluoroethylene (ETFE).

Mr Harland said it was agreed he would visit the factory while in China as part of the Otago delegation attending the 2010 World Expo in Shanghai.

The ETFE material was manufactured by Vector Foiltec in Singapore and Germany, before being shipped to the factory in Beijing and welded into 1.5m by 5m "pillows" secured against sections of rope, Mr Harland said.

He was shown around the factory by representatives from the company and presented with samples of the ETFE and the nylon-type rope it would attach to.

The material's lightweight appearance and feel - similar to the laminated covering of a school book - belied its strength, he said.

"It's just like a piece of plastic, but the unique quality is its molecular structure, which gives it its strength."

Each square metre of the material would weigh less than 3kg once assembled.

It was designed to withstand wind speeds of more than 166kmh.

Mr Harland said it was also self-cleaning and recyclable.

The material was used in many old and new buildings, including the Beijing National Aquatics Centre, the Allianz Arena in Germany and the Eden Project, in Cornwall, England.

"It gives you confidence in the product," Mr Harland said.

The offcuts brought back by Mr Harland were understood to be the first pieces taken from the stadium's roof to reach Dunedin, he said.

However, the rest of the roof was said to be complete and ready to ship once instructions were received, Mr Harland said.

Those instructions were expected to be issued in the next three months, and final assembly work would be completed at the stadium site, he said.

The sheets of pillows would then be hoisted into position on the stadium roof, attached to the steel and aluminium roof structure by the rope in a method similar to hoisting a sail, and then inflated, Mr Harland said.