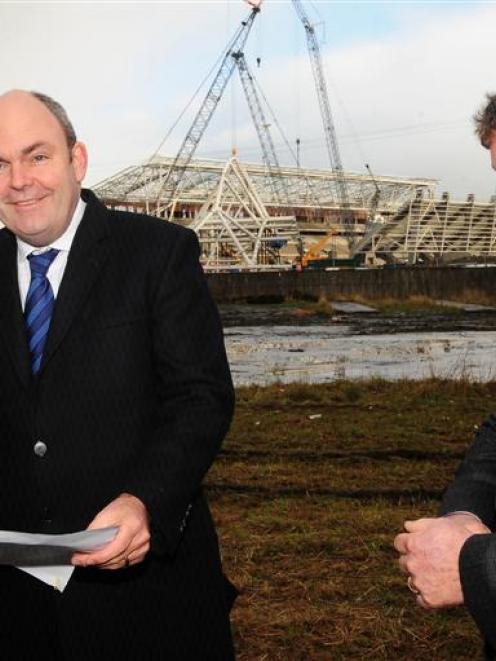 Transport Minister Steven Joyce (centre) checks the site of a planned roundabout, to be built as part of the State Highway 88 realignment, next to the Forsyth Barr Stadium yesterday. He is flanked by Dunedin City Council deputy mayor Syd Brown (left) and Cr Andrew Noone. Photo by Craig Baxter.
Transport Minister Steven Joyce cast an eye over the planned realignment of State Highway 88, past the Forsyth Barr Stadium, in Dunedin yesterday.

However, later this month contractors will roll on to the site, to begin the new alignment.

The Dunedin City Council yesterday announced the tender for the $24.7 million project had been awarded to Hawkins Infrastructure Ltd, of Auckland.

The company is a division of parent company Hawkins, as is main stadium contractor Hawkins Construction.

The company's workers would all come from within Otago.

"As far as the local economy goes, it ticks that box," he said.

The roading realignment was expected to be completed next June, just in time for the stadium's opening and the Rugby World Cup, although the time frame was "very tight".

The new stretch of highway would run for 1200m, with two 3.5m lanes for traffic and a 1.5m shoulder for cyclists.

Another 300m of Parry St would be upgraded, as would connecting legs of roading at the new Ravensbourne Rd roundabout.

A new 60m-long, 16m-wide three-span bridge would cross the Leith, new traffic lights and traffic layout would be installed at Frederick St, and a 70kmh speed limit would run from Ravensbourne to Frederick St.

Fencing would be installed to prevent access to the nearby rail line, and provision had been made to link cycleways and footpaths in the area, Mr Matheson said.