Moana Pool paid off, despite price 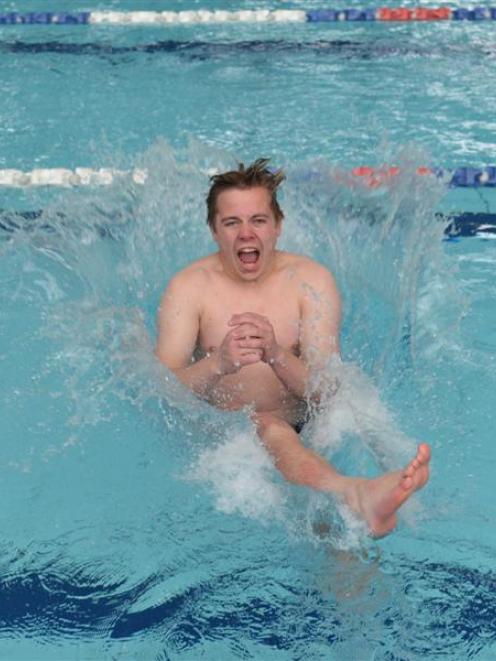 Construction of Dunedin's Moana Pool transformed a grassy field into a bustling building site before the completed pool threw open its doors for the first time on November 14, 1964. Photo by ODT.
Forsyth Barr Stadium is not the first controversial building to capture headlines in Dunedin. Fifty years ago, a decade of debate, disagreement and concerns about the cost preceded the opening of Moana Pool. Reporter Chris Morris looks back.

It was one of the visionary buildings of its day - a cutting-edge Dunedin facility, built to replace its ageing predecessor, designed to let in the sunlight and capped by a revolutionary roof.

Its supporters billed it as the best building of its kind in the southern hemisphere, while opponents worried about the cost to ratepayers and fought for a smaller, cheaper option.

The debate was to drag on for more than a decade, and, in the end, ratepayers were left with an eye-watering loan that paid for the building's construction.

No, this is not the story of Forsyth Barr Stadium - instead, rewind the tape five decades to the opening of Moana Pool.

The much-loved community facility yesterday marked 50 years to the day since it opened its doors on November 14, 1964.

It was a momentous event that drew a stadium-sized crowd, as more than 17,000 people flocked to inspect the city's newest amenity on opening weekend.

A much smaller crowd gathered again yesterday as the Dunedin City Council launched an exhibition of images from opening day to mark the pool's ''golden jubilee''.

Those present recalled the building's place as a centrepiece of Dunedin - and New Zealand - sporting achievement, as well as a recreational, learning and social space.

But it was a building 14 years in the making, as the debate over its construction - which would eventually find an echo in the city's stadium divisions - ebbed and flowed from 1950.

Many of the same tensions existed for both projects, as, from 1950, the city heard dire warnings as its existing swimming facilities slid into disrepair.

Sporting representatives and councillors argued in favour of a bigger, newer, better facility, despite the cost, leading to fiery debates at Dunedin City Council meetings.

Ratepayers' representatives argued against the expense, including R. W. Ollif, who might well have been addressing stadium opponents as he warned the new pool would be a luxury that would leave ratepayers ''saddled'' with debt.

One of the opening salvos came when the Otago Daily Times reported, on May 23, a ''Site For City Amenity'' had been found.

The area beside the old Moana tennis courts, alongside upper Stuart St, would be ''set aside as the site for a modern swimming baths for the city''.

The project would tackle overcrowding at the city's deteriorating Tepid Baths, built in lower Moray Pl in 1914.

But perhaps sensing the debate to come, Cr E. J. Smith cautioned: ''It will be a costly business, of course, but we have always got to face that if we want to progress.''

''Had the baths been the open type, the estimated cost would have been much lower,'' the ODT reported on October 6.

That prompted the council's finance committee to suggest a rates rise, to pay for the loan required to build the pool, at an August 30 meeting.

The expense was justified by the promise of ''the most modern pool in the southern hemisphere'', but there was also talk of a poll of ratepayers to decide the issue, the ODT reported.

Otago Swimming Centre officials argued against a cheaper, open-air facility, describing the council's pool plans as ''the only satisfactory kind for Dunedin''.

The financial pressure on ratepayers could be eased by extending the life of any loan from 20 years to 40 years, swimming officials suggested in October.

The cost would be ''a huge sum'', but justified by the boost to patronage and spectator numbers the new pool would deliver - and a roof was essential, they argued.

''The only way that a saving could be effected was by dispensing with the roof, which would be unwise in Dunedin conditions.''

The first major sign of trouble came in March 1952, when the council's application for a £350,000 loan was rejected by the Local Government Loans Board.

The board cited the council's existing commitments and the wish for a pool of ''a more moderate character'', prompting the public debate to largely fall quiet.

The debate reignited as the city's existing tepid baths teetered on the verge of being condemned, prompting the swimming community to call a crisis meeting in August to discuss the future of the city's aquatic facilities.

An earlier ODT editorial, on July 18, had dismissed plans for a £350,000 facility as ''grandiose'' and called for a more modest proposal.

''In these days of financial stringency the obligation on the Dunedin City Council would appear to be restricted to the provision of a pool which would meet minimum requirements ... [allowing] further development to be undertaken in the future.''

The advice went unheeded, as, on October 2, the council's general committee recommended plans for an ''Olympic standard pool'' costing more than £500,000.

The move was immediately opposed by the Caversham Ratepayers and Householders Association and the Combined Ratepayers' Association, which argued the money should be spent on ''two less elaborate pools''.

Mr R. W. Ollif was particularly critical, arguing the pool would be a ''nice thing to have'', but a luxury nevertheless, and ratepayers would be ''sticking their neck out'' if they allowed themselves to be ''saddled'' with the cost.

Mr D. Forsyth, a ''noted swimming official'', was among those arguing in favour of the ''modern pool'', which would be an ''essential civic amenity''.

The Caversham ratepayers association criticised the project again in December, saying they were ''at a loss'' to reconcile the cost with open-air pools built for less than £100,000 in Christchurch and Auckland.

''It has always been maintained that the country as a whole, and cities, should be run on the same lines as a business, but we cannot fathom how spending £500,000 on an enterprise - which, with interest, repayments, wages and many other costs will not return an amount in the vicinity of those costs - can be considered a business proposition.''

The debate took on fresh urgency in 1958 as the ODT's headline for May 7 boomed: ''Swimming Pool In Danger.''

The story warned the deteriorating state of the city's tepid baths meant they could be forced to close ''at any time'', meaning ''indoor swimming facilities may be denied thousands of people''.

An ODT editorial also urged the council to be ''practicable'' and consider a ''basic'' new pool instead.

Then, amid fresh concerns the council's loan application could again be rejected, Cr N. D. Anderson on October 31 unveiled concept drawings for a pool costing more, not less - 543,000 to be precise.

The ODT took a dim view: ''The existing plans . . . are for something in the nature of a community recreation centre - something that, no doubt, would add to the city's reputation, but would help to make it bankrupt.''

Councillors also divided as Cr R. J. Calvert told a council meeting on November 10 the 500,000 proposal was ''stretching the credulity of the people too far''.

However, his criticism of the plans as ''just so much waste paper'' prompted angry exchanges with other councillors, while Mayor Sir Leonard Wright ordered Cr Calvert to ''get his facts right''.

By November 26, a council decision to limit itself to spending no more than 250,000 on the pool appeared to have won over most Dunedin's ratepayers' representatives, who told the ODT the revised figure was more realistic.

Maori Hill Ratepayers' Association secretary Mr D. M. McPherson was among those to dismiss fears of a ''white elephant'', saying the same concern had also been raised when the Town Hall was built.

''I would like to see the new pool gone on with tomorrow, and I think that is the opinion of quite a number of people on the hill.''

By September 1959, revised plans had been endorsed, but the estimated cost was climbing again - initially, it was likely to be ''several thousand pounds higher'' than the 250,000 limit, the ODT reported.

Details of a £264,000 loan from the Local Authorities Loans Board for an Olympic-standard pool were confirmed.

However, the sum would pay for only the ''bare essentials'', leaving members of the Junior Chamber of Commerce to fundraise for extra features, organiser Neville Marquet said at the time.

That led to Dunedin's first ''Mystery Envelope'' appeal, organised by the Chamber - known as the ''Dunedin Jaycees'' - which raised money to include a covered diving pool at the south end of the new pool.

Eventually, after lengthy construction and delays, the project finally came to fruition when the doors opened on November 14, 1964.

The cost eventually settled at £450,000 - nearly twice the earlier limit, and more than $16 million in today's money.

Ahead of the opening, the pool was again lauded and criticised on the ODT's front page on August 14, under the headline: ''Praise For Moana; But What A Price.''

As swimming pool managers from around New Zealand toured the facility ahead of opening day, the ODT reported: ''All agreed it was a magnificent pool - some said it was the finest in the southern hemisphere.

''But several of the managers posed the question whether too much money had been spent on too lavish a pool.''

That only seemed to fuel the public appetite for the facility, as more than 17,000 people flocked to inspect the pool on opening weekend.

''Not since the Beatles' visit have the Dunedin police had such a hectic time controlling crowds.''

And, after declaring the new pool open, Mayor Thomas Sidey summed up the situation: ''We have come to the beginning of a new era in swimming in Dunedin and Otago.''