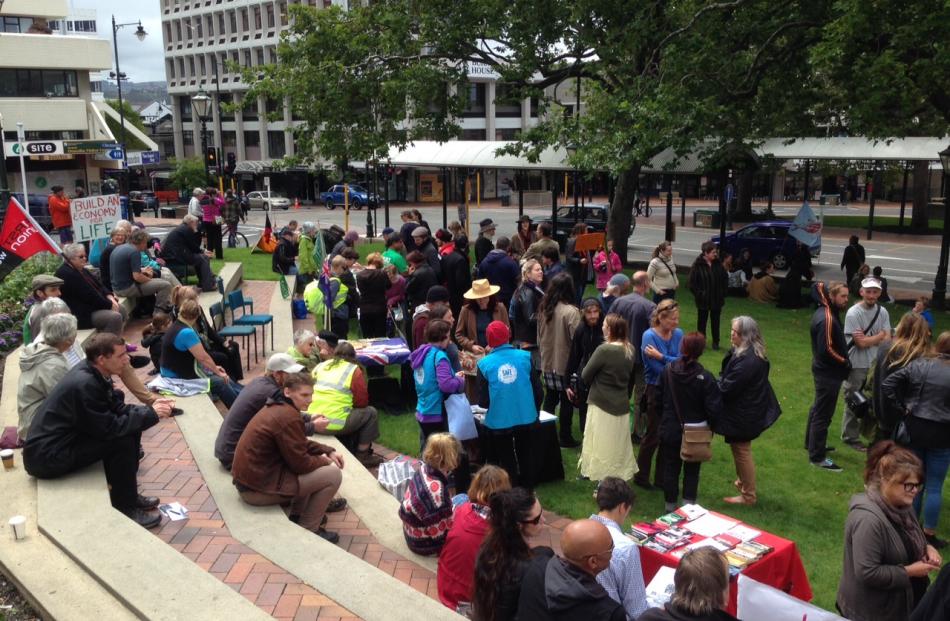 Up to 250 people have declared the Octagon a Trans Pacific Partnership-free zone at an ''action event'' in Dunedin this afternoon.

The crowd heard from Labour's Dunedin MPs David Clark and Clare Curran, the first time the pair have spoken publicly since Labour declared itself opposed to the controversial deal after years of uncertainty over where the party stood.

Dr Clark, who is also Labour's trade spokesman, said it had been a ''hell of a ride'' since he took on the trade portfolio last month.

The party had taken a "principled stance not a populist stance'' to the TPP, which breached New Zealand's sovereignty, he said.

New Zealand relied on trade, but not at any price, he said.

He said the party needed to be careful how its presented its argument over TPP in order to take "middle New Zealand'' along with it.

Green Party co-leader Metiria Turei received the warmest response from the crowd, especially when she declared the TPP would bring down the National Government.

She said she had been heartened by the anti-TPP speaking tour featuring US trade authority Lori Wallach, who has been telling crowds in New Zealand about its lack of support on both sides of the political divide in the United States.

The crowd was also entertained with poetry readings, songs, and a talk about the benefits of introducing a universal basic income.

Dunedin activist Scout Barbour-Evans, who was door-knocked by police this week ahead of today's event, said the relatively low-key nature of the protest showed the visit had been an "absolute joke''.

"This is exactly what was planned.''

It was one of numerous anti-Trans-Pacific Partnership protests around the country leading up to the official signing of the document on February 4.

Four to five hundred people gathered in front of the Governor-General's residence in Wellington to hand him a petition, asking him not to sign off on the TPP.

Organiser Greg Rzesniowiecki said it was illegal for anyone to block them from passing over the petition, and they would wait there until it was received.

He said people from various industries were there holding placards making statements such as "support local, not global'' and "protect our freedoms''.

The group will finish with their "Great New Zealand Sell-off'' display at parliament around 3pm.

In Auckland, National MP Nikki Kaye's office in Freeman's Bay has been tagged in an apparent protest against the controversial trade deal.

The words "NO TPP yes I voted'' have appeared in black spray paint on Auckland Central MPs' electorate office.

Demonstrations are expected to continue tonight, with car enthusiasts planning protest convoys against the TPP.

Hundreds are expected to turn out for airport to CBD protest convoys in Auckland, Wellington, Christchurch, Hamilton, Whangarei, Palmerston North and Tauranga from 10pm.

On Thursday, the Waiheke Local Board voted for the island and Hauraki Gulf to become a TPP-free zone - a symbolic gesture put forward by member Shirin Brown.