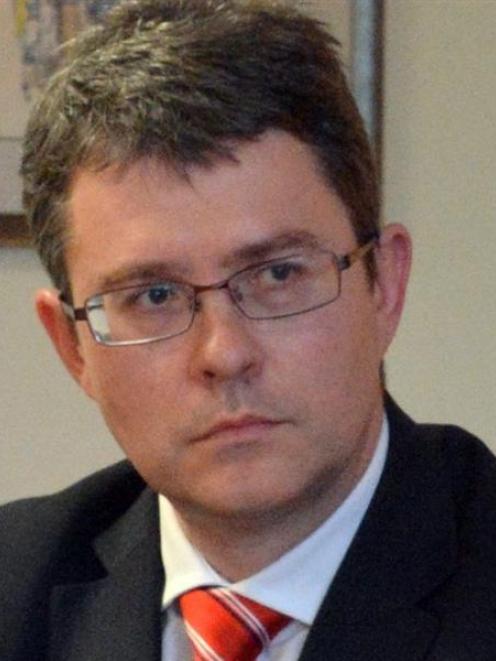 Paul Orders.
The Dunedin City Council has been dealt a body blow with confirmation chief executive Paul Orders is poised to head back to Wales.

Mr Orders will this morning be named in Wales as the recommended candidate to take the chief executive's position at Cardiff Council.

The new role would see Mr Orders returning to the organisation he left in 2011, when he came to Dunedin, and assuming responsibility for workforce of 18,000 and an annual budget of nearly $2 billion.

Mr Orders is yet to officially tender his resignation in Dunedin but he was the unanimous choice of Cardiff Council's appointment committee.

It has recommended his appointment, which will be considered at the next Cardiff Council meeting on September 26 (September 27 in New Zealand), when a final decision is expected.

If it is confirmed, Mr Orders is expected to depart Dunedin before the end of the year.

Mayor Dave Cull confirmed the offer in a statement to the Otago Daily Times late yesterday, while councillors were briefed at the end of yesterday's marathon full council meeting.

He would not be interviewed until after details were confirmed, but in a brief statement yesterday said the Cardiff role was ''one of the few positions'' that could draw him and his family away from Dunedin.

''My time working for the Dunedin City Council has been stimulating and enjoyable, personally and professionally.''

Mr Cull said Mr Orders had made a ''huge difference'' to the council, delivering millions of dollars of budget savings, boosting debt repayments and reshaping the council structure.

''He has been an outstanding CEO and we would be extremely sorry to see him go. However, we understand the attraction for Mr Orders and his family of returning to their home town.''

Mr Cull would also not be interviewed yesterday, and councillors were under instructions not to talk until after Cardiff Council's decision was confirmed later this week.

Mr Cull said councillors discussed the process and time frame for appointing a new chief executive during a non-public part of yesterday's meeting.

News of Mr Orders' imminent departure ended months of speculation since Welsh media reports in May linked him to Cardiff Council's top job.

Mr Orders, who is married with three young children, arrived in Dunedin in September 2011 after quitting his role as the corporate director (place) at Cardiff Council.

His move came soon after Cardiff Council appointed Jon House as its new chief executive, but Mr House announced his resignation in May after less than three years in the role.

Mr Orders was appointed for a five-year term in Dunedin, replacing former chief executive Jim Harland, and with a remuneration package worth between $340,000 and $360,000 per annum.

At the time, the recruitment process that led to Mr Orders was said to be the most expensive in the council's history, costing just over $84,000.

Mr Cull said at the time Mr Orders was ''well and truly'' the best candidate for the job but was expected to deliver results.

''We didn't employ him for business as usual. We employed him because we want some things to change.''

Since then, Mr Orders had earned plaudits while overseeing major change within the council, including departmental reviews and restructuring, a leaner staff count and a major overhaul of the council's executive management team.

An efficiency drive also saw staff pushed to absorb cost increases wherever possible, while millions of dollars in other savings were also identified, allowing the council to slash rates increases and planned capital expenditure over the past two years.

That freed up room within the council budget to accelerate debt repayments and to budget for rising renewals bills to be paid for with cash, rather than by borrowing, in future years.

Earlier this year, Mr Orders declined a $35,000-a-year pay rise, saying the increase could not be justified when the organisation remained in savings mode.