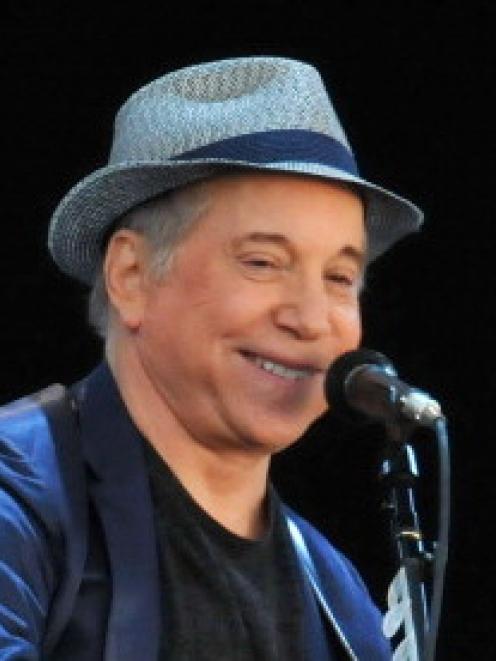 It was confirmed yesterday the 12-time Grammy Award-winning writer of songs like Bridge over Troubled Water and The Sound of Silence will perform inside Dunedin's roofed stadium on the evening of April 6.

Simon, half of the hit duo Simon and Garfunkel in the 1960s, is expected to play music from all eras of his 50-year career.

The announcement by Australia-based Chugg Entertainment means the stadium has finally secured its second major international concert, nearly 18 months after Elton John performed on the stadium's main stage in front of 30,000 fans in late 2011.

Dunedin Mayor Dave Cull welcomed the ''wonderful news'', saying the concert would attract thousands of fans and pour millions of dollars into the Dunedin economy. 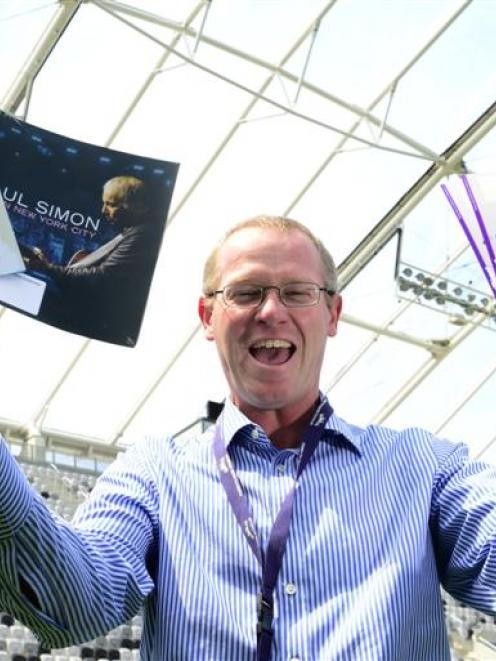 Dunedin Venues Management Ltd chief executive Darren Burden celebrates news of the concert. Photo by Peter McIntosh.
''His music takes me back to fond memories of the '60s and every decade since. Paul Simon will be a huge drawcard,'' he said.

Simon will be supported by North American musician Rufus Wainwright on a two-show tour of New Zealand, beginning in Dunedin and moving to Vector Arena in Auckland two days later, on April 8.

Mr Burden said tickets for the show would go on sale on February 8 at prices ranging from about $100 to $200 per ticket - making them cheaper than prices charged for Elton John's sold-out show.

It was expected an ''early bird'' opportunity would be offered, but exact details of ticket sales were still being finalised.

The stadium will again be configured with the stage at the eastern Otago Daily Times stand end, with seating on the playing surface as well as in the stands, providing capacity for up to 35,000 fans.

''I think he's one of those artists that's able to attract people across generations. From that perspective it's really, really positive for us.

''I think we have got a pretty reasonable chance of a sell-out.''

DVML had struck a deal with the promoter that ensured it would be ''profitable'' for DVML regardless of crowd size, but Mr Burden would not divulge details.

He declined to comment when asked whether DVML would receive a venue hire fee from the promoter.

''The deal from our perspective will be profitable. Other than that, all other details remain in confidence,'' he said.

Asked about sound problems that prompted complaints after Sir Elton's show, Mr Burden said lessons had been learned and ''dead spots'' within the venue addressed.

Chugg Entertainment representatives had been at Sir Elton's Dunedin show, checking sound quality around the venue, and ''they clearly liked what they saw''.

The Simon concert will be a major boost for a venue that, since Elton John, has struggled to attract international acts - blamed on a tough touring market - as DVML grappled with a $3.2 million loss for the 2011-12 year.

It was hoped the concert would attract fans to Dunedin from outside the city, as happened when Elton John's show pumped an estimated $14 million into Dunedin's economy.

''I would expect there will be a number of people who will be coming to Dunedin for this concert,'' Mr Burden said.

''There will be a pretty significant economic impact for this concert taking place,'' he said.

Tourism Dunedin chief executive Hamish Saxton was ''delighted'' by news of the concert, saying feedback after the Elton John show was that visitors stayed longer, and spent more, while also exploring the region.

Mr Burden said the concert was also good for business at DVML, as it offered another chance to work with a promoter and showcase the stadium's ability to host major international concerts after a tough year.

''The venue has found attracting concerts to be somewhat of a challenge. One of the key issues for us is to build a reputation for hosting international concerts, and having someone like Paul Simon, at that sort of level, builds upon that reputation,'' he said.

Hit singles: The Sound of Silence, I am a Rock, Kodachrome, Scarborough Fair/Canticle, Mrs Robinson, Homeward Bound, 50 Ways to Leave Your Lover, Me and Julio Down by the Schoolyard, Cecilia, The Boy in the Bubble, Wake Up Little Susie, The Boxer, Bridge Over Troubled Water

• Met Art Garfunkel at Forest Hills High School when they were both 11 and performed their first song Hey, Schoolgirl in 1957 as "Tom and Jerry"
• Formed Simon and Garfunkel in 1964 with Garfunkel, achieving international fame, before splitting in 1970 at the height of their success.
• Awarded 12 Grammys for his solo and collaborative work, including the Lifetime Achievement Award.
• Simon and Garfunkel inducted in Rock and Roll Hall of Fame in 1990.
• Simon inducted in Rock and Roll Hall of Fame as solo artist in 2001.
• Selected as one of the ''100 People Who Shaped the World'' by Time Magazine in 2008.
• Performed the Sound of Silence last month at the funeral of teacher Vicki Soto (27) who was killed protecting her first-grade pupils at the Sandy Hook Elementary school shooting.