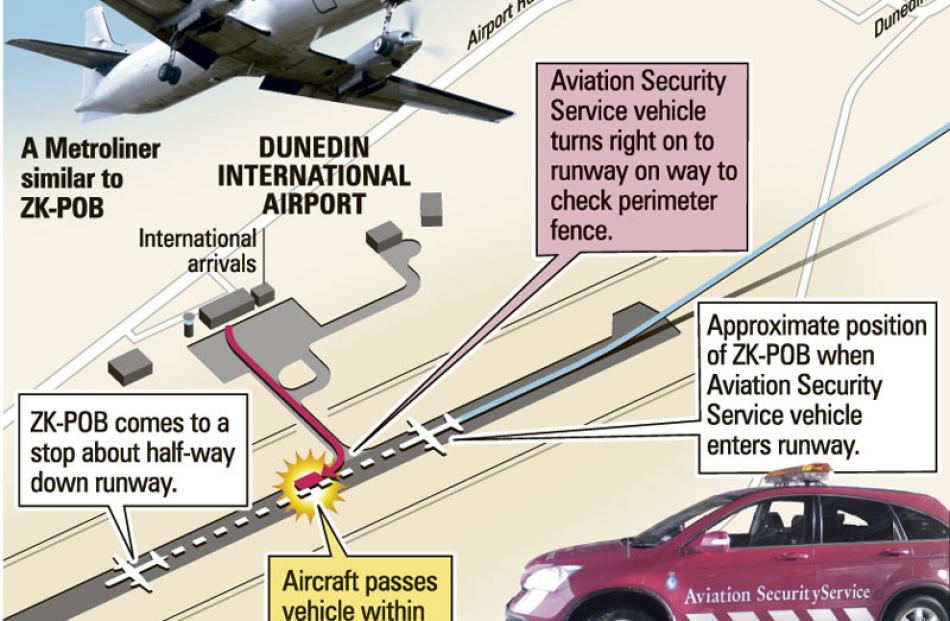 "This was a serious runway incursion and a collision was fortuitously avoided," the Transport Accident Investigation Commission said in its 20-page report into the May 25 incident.

The Metroliner aircraft - a regular night freight service from Auckland - was delayed by bad weather from its normal arrival time of between 2am and 3am, until just after 6am.

At 6am, an Aviation Security Service officer, unaware the aircraft was approaching, turned on the hazard beacons on his Honda CRV before leaving to check on the runway's perimeter fence.

However, with flooding over some areas following heavy rain, he decided to drive on the runway and check the fence using the vehicle's searchlights.

The officer said in a later interview he noticed the runway lights were on, but was not aware an aircraft would be landing at that time of the morning.

CCTV footage showed the security officer entering the runway at 6.08am.

Moments later, he transmitted his runway approach through a radio call.

The pilots of the landing aircraft did not hear the radio call.

As the security officer turned from the taxiway on to the shoulder of the runway, he stopped quickly because of the poor visibility and was overtaken by the aircraft - 10m from his vehicle.

"The combination of rain and darkness reduced the visibility to the extent that the pilots did not see the vehicle on the runway and were unaware of the high collision risk," the report stated.

The commission did not make any recommendations as a result of the inquiry, as an improvement in training and procedures involving aviation security officers "should help prevent a recurrence".

Specific training points included liaising with the airport to ascertain traffic movements; a review of driving standards; and for supervisors to confirm if weather and lighting conditions were suitable to conduct an effective patrol.

A lack of clear procedure for the aviation security officer as to when he could enter the runway when air traffic control was unavailable, combined with poor weather conditions and flooding by the perimeter fence, contributed to the incident.

The report noted the security officer did not appreciate flights could be delayed, nor that the illuminated runway meant an aircraft was about to land, suggesting he had not been trained in these areas to the standard expected by Civil Aviation rules.

At the time of the incident, Dunedin International Airport procedures were for no vehicles to enter the runway without clearance from air traffic control.

Vehicles were permitted on the runway only in emergencies at times when the control tower was not operational.

"The need to inspect the perimeter fence was not a case of emergency," the report stated.

Aviation Security Service chief executive Mark Everitt said changes both in Dunedin and throughout the country had been implemented.

He confirmed the employee remained with the service.