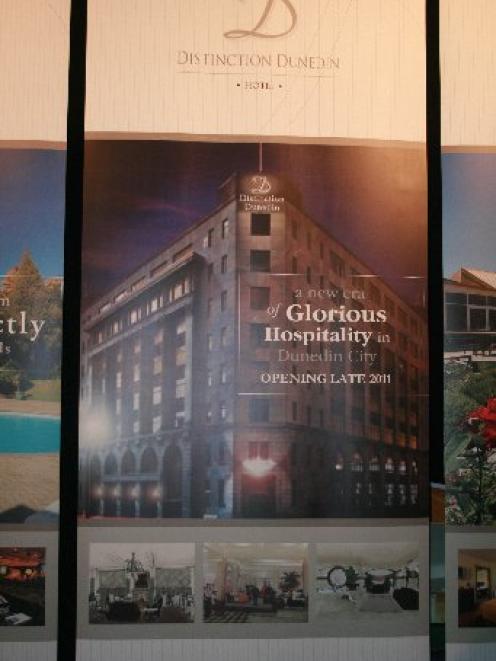 Distinction Hotels, which owns hotels in Queenstown, Te Anau and Rotorua, is marketing the yet-to-be-completed hotel, located in the Exchange, at the four-day Tourism Rendezvous New Zealand conference.

The company aims to finish the 180-room complex in time for next year's Rugby World Cup.

Owner Geoffrey Thomson declined to comment on the hotel project.

However, the Otago Daily Times understands features of the four-star hotel will include a lap pool and gymnasium.

The company was not taking bookings from tourism buyers, but was promoting the building as part of its marketing campaign, which features two large displays of the hotel emblazoned with the digitally enhanced sign "Distinction Dunedin".

A representative of the hotel chain singled out the Dunedin City Council as being "good" to work with on the project.

Tourism Dunedin chief executive Hamish Saxton said while it had little detail about the hotel, the regional tourism organisation was "supportive of an additional hotel for Dunedin".

Buyers at the tourism business conference were excited to hear of the company's plan to open a hotel, and Tourism Dunedin staff were advising them to talk directly to hotel representatives.

A company spokesman said a further announcement regarding the hotel development was expected soon.