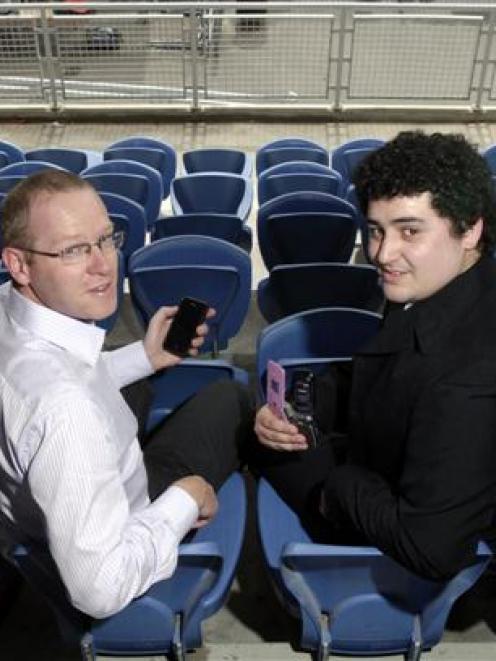 The "PocketStadium" software, which links to a website, could also provide patrons with a host of other information such as the range of food, beverage and merchandise available, its price, match and venue information, and game statistics.

The project, believed to be a first for New Zealand, earned final year bachelor of information technology students Julian Richardson (21), Lisa Taylor (21) and Hayden Parata (20) an A+ at their recent assessment and praise from their client, Dunedin Venues Management Ltd.

Operations manager Darren Burden said when he met the students at the start of the year, he was not sure they would be able to make the concept work.

"They had a spark of an idea ... which they have been able to turn into a fully functioning product," Mr Burden said.

Dunedin Venues planned to develop the website with a range of information and images and offer the service initially to selected stadium patrons, he said on Thursday.

"I could see it working really well for a start in our club reserve section."

The system could also be sold to other sporting venues, he said.

The rights to market it were owned by Dunedin Venues and the polytechnic.

The students said websites for stadium patrons were in use in a few stadiums in the United States.

"But there is nothing like this in New Zealand that we know of," Ms Taylor said.

The other groups developed an interactive children's game for the University of Otago's New Zealand Marine Studies Centre at Portobello, an interactive marine navigation exhibit for Otago Museum and a business application including an online ordering site for Fonterra.

Students' work from throughout the polytechnic is on display over the next few weeks as part of its annual Excite programme.

One of the most popular events is the fashion design show, which has been held in several industrial and commercial venues over the years.

This year's show, featuring the work of more than 80 designers, will be held in the former Wickliffe Press building in Albany St.