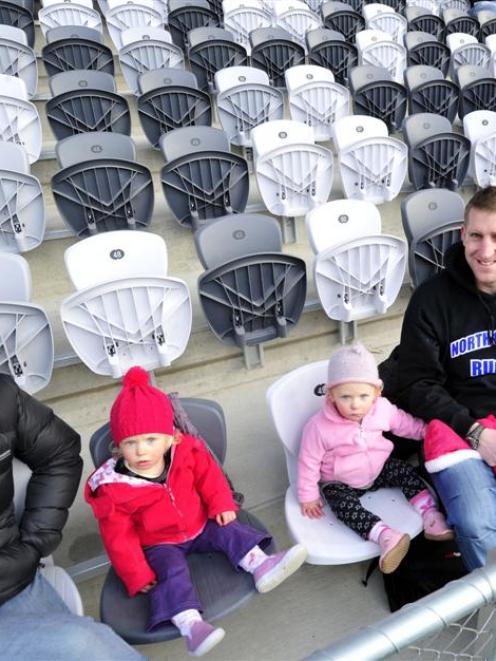 The Chisholm family at Forsyth Barr Stadium yesterday (from left) Beth, twins Marlie and Ruby (21-months), and Kurt. Photo by Craig Baxter.
The seats were comfortable, the hot chips were tasty, the toilets were plentiful, and it was warmer than expected - Dunedin's Forsyth Barr Stadium got the big tick from rugby fans at yesterday's first official match.

It was also the first time 21-month-old twins Marlie and Ruby Chisholm had been to a rugby game and parents Kurt and Beth were impressed with the experience.

"I think it's great.

"It's fabulous, and it's nice and warm.

"I think we are wearing too many clothes for an indoor stadium," the twins' mother said.

From his "surprisingly comfortable" seat, Mr Chisholm said it was "quite unusual" to attend a rugby game and not have to worry about getting wet or cold.

There were also "plenty" of toilets, food, and drink compared with Carisbrook, he said.

Graeme Winter was one of the crowd happy with the food: "The chips are good", he said.

"I'm very impressed with the stadium and the staff have been good. People were expecting big delays but we were in in no time."

Minimal queues were also pleasing to Richard Wilson, who went on to comment on the "great" toilets.

"It's great isn't it? Superb. Everywhere is great. You need crampons and an ice axe to get to the top [of the north stand] but it's worth it," he said.

While the crowd was a mix of serious fans and those simply keen to get inside the about $200 million venue, it was not hard to envisage the atmosphere a 30,000 crowd would produce.

As each try was scored or quick break made, the crowd's rousing cheers filled the stadium, rebounding off the plastic roof.

Dunedin Venues Management Ltd chief executive David Davies said people would have to "get prepared for more atmosphere than previously".

"Just wait till we get a full house, I think it's really going to be an environment people will want to be in," he said.

He believed the stadium received a "good workout" yesterday and staff "learned some lessons from it".

A target had been set of having everyone seated before kick-off which resulted in Mr Davies and others approaching people in the queues to sell tickets for cash.

"There was nothing wrong with the system ... we had to be proactive, rather than reactive [and] there was not one word of complaint," he said.

As far as traffic went, he said people would get used to the "brand new part of town", and while he was "not aware" of any major issues, a full debriefing would be held on Tuesday.