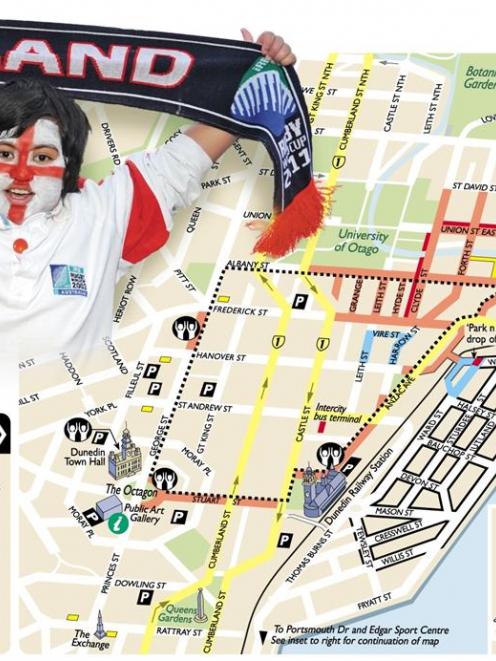 All aboard for the Rugby World Cup. Passenger trains will roll into Dunedin and 16 streets will come to a standstill in what the Dunedin City Council describes as the most complex logistical challenge in its history.

The prediction came as city-wide plans for the global sports tournament later this year were unveiled by council staff yesterday.

The confirmed plans featured the return of passenger trains to and from central Dunedin, the closure of blocks of city streets to motorists, public transport alternatives and walking routes to and from the Forsyth Barr Stadium.

Dunedin deputy mayor Chris Staynes said the scale of the event would surpass even the New Zealand and South Seas Exhibition held in Dunedin in 1925-26.

Up to 30,000 fans were expected at the stadium for matches such as the England v Argentina clash, while others crowded city bars, restaurants and outdoor spaces.

"This will be the biggest event the city has ever hosted," Cr Staynes said. "The eyes of the world will certainly be on us."

The city's response would be based around a detailed transportation plan and other initiatives unveiled by council staff yesterday.

Taieri Gorge Railway trains would run to and from Mosgiel and Waitati, stopping at the Dunedin Railway Station, on match days in Dunedin.

A total of 16 roads would be partially or completely closed, including parts of Anzac Ave, Frederick St, Albany St, Union St East, surrounding side streets and lower Stuart St and the lower Octagon.

The closures would continue for hours either side of stadium matches, with fans encouraged to use public transport and walk to the venue.

Outlying parts of the city - including the esplanade at St Clair, Roslyn and Mornington - would also be promoted for wining, dining and celebrating, in addition to entertainment and hospitality in the Octagon and at the Dunedin Town Hall, Dunedin Railway Station and part of George St.

The council has budgeted $350,000 to pay for tournament planning and events, excluding stadium costs.

Council transportation operations programme engineer Michael Harrison said 18 months' of planning aimed to ensure pedestrians could safely walk between the stadium and the city, while juggling the needs of businesses and other groups.

"It's been quite a significant exercise . . . there will be some people affected more than others. We have tried to mitigate that as best we can," he said.

Roads around the stadium would be "reasonably packed" with thousands of fans using three walking routes linking the Octagon and the stadium.

There would be no public parking at the stadium, and using nearby Logan Park had been ruled out, he said.

Instead, streets around the harbour basin industrial area would provide stadium parking for up to 2500 vehicles and 10,000 fans.

More parking was available in streets around the Edgar Centre, from where a $2 park-and-ride bus service would run from Midland St to a Wickliffe St drop-off point near the stadium, he said.

A public drop-off point for motorists would operate on Leith, Vire and Harrow Sts, a taxi rank on Riego St, and buses would use closed sections of Clyde St, Union St East, Forth St and Harbour Tce.

Butts Rd would also be closed to provide an alternative VIP route to the stadium if required.

The closures would come into force three hours before stadium matches and continue for two hours afterwards, with fans asked to walk 1.7km from the Octagon, 1.3km from the harbour basin area or 800m from the public drop-off area to reach the stadium.

State Highway 88 would remain open, linking with St Andrew St to provide access to the central city from Port Chalmers.

Mr Harrison said fans should opt for a "reasonable mix" of options to reach the central city, ensuring no one option was overwhelmed, and then walk to the stadium.

Cr Staynes told media a "huge amount" of work had been carried out to prepare for the event, and council Rugby World Cup co-ordinator Debra Simes said the city was "on track".

New recycling facilities were also spreading across the city, plans to foster business links with visitors and promote the city's hidden gems were being developed, and street performers and live entertainers were confirmed.

The Octagon, Dunedin Railway Station and George St - between Hanover and Frederick Sts - would provide festival "hubs" along with the "fan zone" in the Dunedin Town Hall.