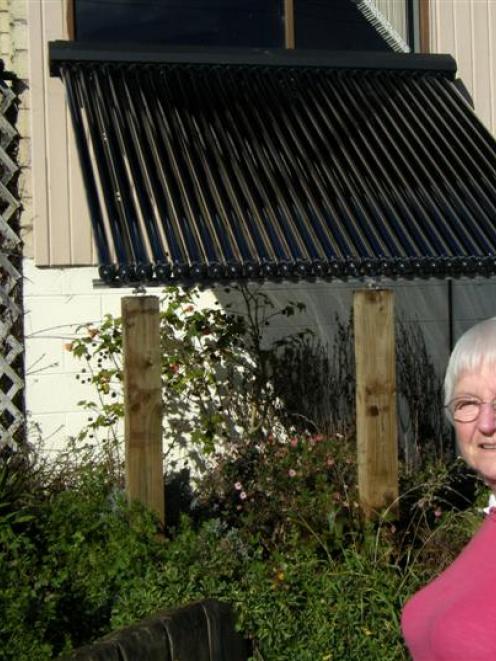 Broad Bay resident Olive Bain admires the solar panel installed in her front yard. Photo by Allison Rudd.
Olive Bain was so thrilled with the energy savings from her solar hot water system she thought everyone should have one.

"I was so wildly enthusiastic I was going to write to the Minister of Energy and suggest it should be compulsory in all homes. But I didn't in the end."

It is no wonder she is pleased. Since it was installed 18 months ago in the Broad Bay house she shares with her son, her power bills in sunnier months have dropped from about $90 to as low as $37.

However, the system cannot produce hot water without sun, and Dunedin's bleak winter this year has dented the savings.

Mrs Bain (76) has lived in Broad Bay for 50 years, the past 20 in the home she and her late husband Allan bought with retirement in mind.

The solar heating was installed as "future proofing", along with a new kitchen, a wet floor shower and a lift to carry groceries and firewood from the basement garage to the living area above.

She said she had always been interested in solar heating, and described herself as a "fringey environmentalist" who composted her vegetable peelings and used reusable supermarket bags.

Her system, which cost about $6000, consists of a new 250-litre hot water cylinder, an electronic control panel and an evacuated glass tube collector plate which has been placed on the north side of the house, below the dining room window.

Originally, the builder had planned for the plate to go beneath the lounge window. But the installer, Ian Buchan, changed that, she said.

"He said it was very important it face due north. I didn't question that. If you employ an expert, you listen to their advice."