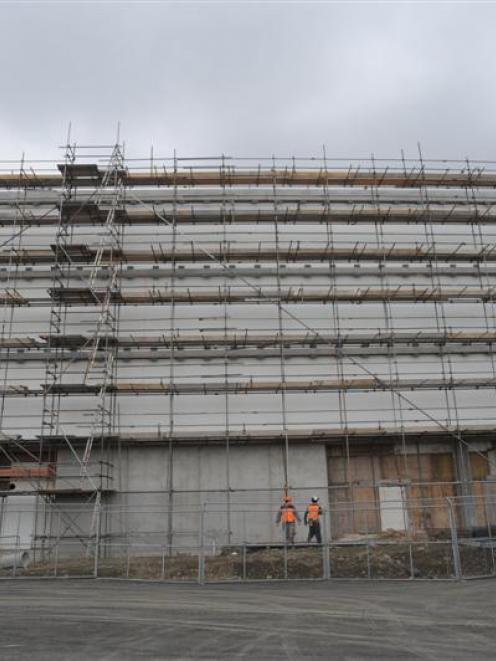 The work was described yesterday by Cr Lee Vandervis as "demolition", but that description was denied by Carisbrook Stadium Trust chairman, Malcolm Farry.

The brief debate arose as the latest report on the stadium came before the Dunedin City Council's finance, strategy and development committee yesterday. The six-weekly report led to clashes, as the latest details of the project were discussed.

It also emerged yesterday that Rugby World Cup 2011 organisers were not confident a media box on the north stand of the stadium would be completed in time for the World Cup, meaning it would stay on the south side for now.

The design changes were brought about when alterations to the catering area were signalled earlier this year. There was debate at the time about the issue, with Mr Farry claiming the design in place was appropriate, but Mr Davies asking the council for extra money for the catering fitting-out, part of $5.1 million of extra funding agreed to in March.

Cr Vandervis yesterday asked if there had been "demolition" at the stadium.

He had heard concrete cutters were used, and "demolition is the only word you can use".

Mr Davies said after the meeting it was regrettable the work had to be done.

The design changes were part of $2.4 million allocated to catering, and while other options had been considered, in the end it was decided it was "better to demolish and start again".

The work allowed bars to be lengthened on one level of the stadium, and changes on another level to allow for catering equipment. The changes brought the stadium in line with international standards, and would help financial projections to be met.

The report to the meeting confirmed the media suite relocation could be completed before the Rugby World Cup.

"However, at the request of RWC the original media suite may still be used."

A decision had been made last year to build the media box on the north rather than the south stand, which would free up areas on the south stand for more corporate boxes, thus allowing for extra revenue.

Mr Farry said not all media would shift, rather Sky Television facilities would move to the north stand, while other media would stay in the south stand.

But RWC representatives had said "in effect" they were concerned about the loss of about 180 seats on the north stand, some of which were provided to Christchurch people unable to see games in that city, and "are not as confident as we are" the box would be finished in time.

Mr Farry said the seats could be relocated to the south stand, and the trust was confident the box would be finished. But as RWC had agreed to pay any extra costs from keeping the media box in the south stand until after the World Cup, it was agreed to do that. After the event , that work would be completed.