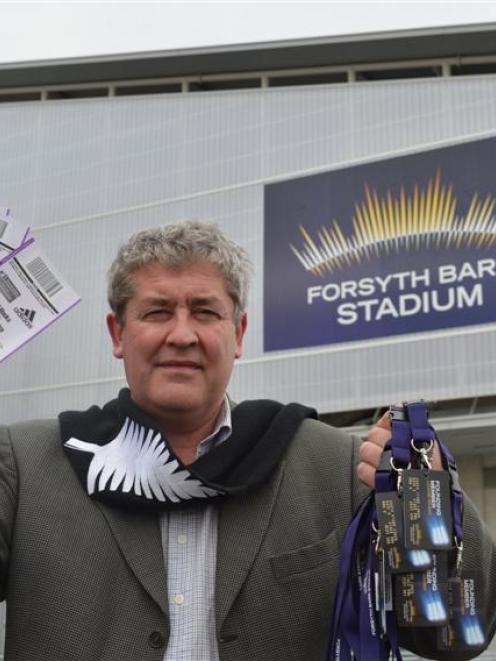 Andrew Carmody is disappointed that he and hundreds of other rugby fans will be locked out of a Forsyth Barr Stadium hospitality lounge they paid to use at next weekend's All Blacks test match. Photo by Peter McIntosh.
Angry rugby fans have forced a concession from Dunedin Venues Management Ltd, after threatening to tear up membership contracts over a lounge lockout for next weekend's All Blacks test against the Springboks.

Hundreds of fans with five-year contracts for stadium hospitality lounges were told on Monday they could not use one of the two lounges promised to them.

Instead, the lounge on the second level of the stadium's south stand was to be used by the New Zealand Rugby Union.

Brooker Travel Group managing director Andrew Carmody said he was part of a 120-strong group of stadium founding members facing a lockout from the lounge.

Their contracts - each costing $1590 per season - provided seats and access to the level two lounge, and another lounge on level four, for all ITM Cup, Super 15 and test matches.

DVML said in a letter the level two lounge would be off-limits, and offered a temporary lounge.

The contract allowed DVML to shift members to a replacement area if needed, but Mr Carmody said the "concrete bunker" offered was not comparable.

The change affected 375 of 2000 fans with stadium lounge memberships, and Mr Carmody said members of his group were considering ending their contracts.

"Why would you pay $1500 for a seat if they could just take away the bells and whistles whenever they want?"

He met DVML chief executive David Davies to discuss his group's concerns, but was offered no guarantee of a solution.

However, the situation changed after the Otago Daily Times began asking questions yesterday.

Mr Davies and DVML commercial director Guy Hedderwick were not available for comment, but DVML communications and media manager Jo Scully said a review was planned to "come up with a better solution".

That would not resolve the problem in time for next Saturday's test, but future internationals "won't result in the same relocation", she said.

Ms Scully said DVML was required to provide suitable hosting space for the NZRU, and had settled on the level two lounge at the time the test match was negotiated last year.

Members were only told of the change this week because the "solution" was still being worked on, she said.

NZRU strategic relationships and planning general manager Nigel Cass said he sympathised with affected members, but the situation was "not one of our making".

The NZRU did not specify which space it wanted at Dunedin's new stadium, "so in no way were we involved in ejecting members from the lounge".