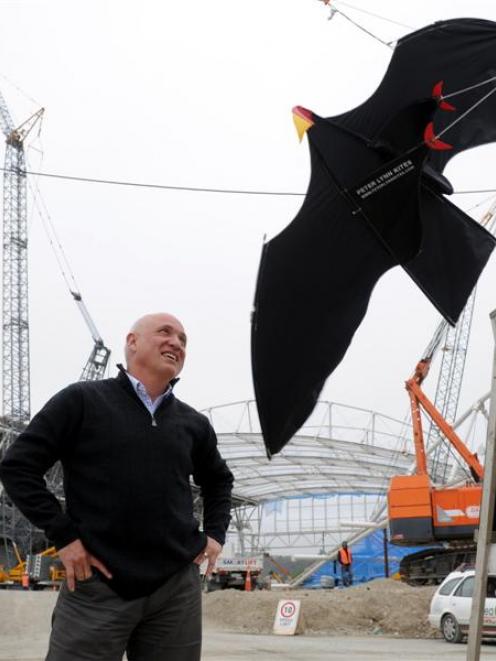 Dunedin Venues Management Ltd chief executive David Davies inspects an Adams Flags "Sky Crow" - one of many tools that could be used to scare away birds at the Forsyth Barr Stadium in Dunedin. Photo by Stephen Jaquiery.
Feathers could fly if seagulls try to turn Dunedin's Forsyth Barr Stadium into their next nest.

Dunedin Venues Management Ltd staff - tasked with running the roofed stadium once complete - are planning to use trained hawks or other predators to chase down seagulls causing a flap inside the venue.

DVML chief executive David Davies said spikes, nets and sirens would be used in the first instance, if required, to stop birds roosting on the roof and possibly damaging the structure.

However, a natural predator such as a trained hawk could be unleashed to chase down the feathered pests making a home inside the venue, he said.

It was a tactic employed in some northern hemisphere stadiums, including Millennium Stadium in Wales, and one Mr Davies believed was preferable to poisoning or any other form of "chemical deterrent".

"There will be something that will scare them off.

The use of the hawk in the UK is simply that birds know when the hawks are about and they tend to steer clear.

We would pull out something that may attack seagulls in a natural fashion.

"You only really need to do it for two or three hours and then the message gets out.

Then you just programme that in on a regular basis."

Nesting was likely to be "less of a problem" at Dunedin's stadium, because of the roof's largely ETFE surface.

"We suspect that will put off quite a number of them trying to nest.

They obviously can't get their webbed feet into it."

However, left to their own devices, birds flying over or gathering around the stadium's roof could make a mess of the ETFE panels or damage paint covering the flat roof of the stadium's south stand, he said.

Others could also find their way inside the venue through open sections built into the stadium's design, he said.

"It would strike me that the most logical thing is to nip that in the bud early."

Mr Davies said plans had already been discussed with staff from project manager Arrow International, including considering previous experiences at Carisbrook and overseas.