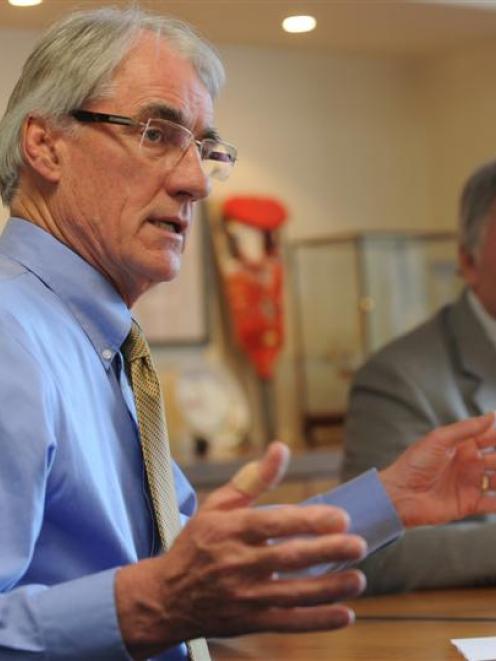 While the valuation is not the much-debated true cost - which is still some time away from being confirmed - it may be close, council finance and corporate support general manager Athol Stephens said yesterday.

That valuation is more than the $188 million initial figure the city was told about, and the $198 million it rose to more recently.

The stadium, and its net debt, will be transferred to Dunedin Venues Ltd (DVL) on December 13, if a finance, strategy and development committee on Monday agrees to a recommendation in a report released yesterday.

Mr Stephens, and committee chairman Cr Syd Brown, yesterday announced the proposed transfer, which has been planned for about two years.

The transfer price had been set by independent registered valuer John Dunckley, of Darroch Valuations.

Cr Brown said the difference between the transfer value of $225 million, and the net debt, estimated to be between $140 million and $150 million, was between $75 million and $85 million.

It was proposed to treat that difference as paid-up share capital.

"This will give DVL a robust balance sheet.

"This capital structure does not commit the council or DVL to any further debt or any commitments to further debt."

Cr Brown told media at a press conference he wanted people to be "fully aware" of the process the council was going through.

The rent DVML would pay DVL was $4 million, based on the valuation.

Mr Stephens said DVML was aware of that figure, which had been factored into the company's budgets.

Cr Brown said the valuation was based on "replacement costs" of the stadium.

Asked yesterday how those costs were worked out, Mr Dunckley sent "International Valuation Guidance" documentation, which showed the valuation was based on the "principle of substitution".

The documentation said the valuer should estimate the cost of a "modern equivalent asset".

The cost of the stadium has been highly controversial, with some people suggesting aspects like roading changes to State Highway 88 near the stadium, should be included.

Cr Brown said it took months after a project the size of the stadium was completed before final accounts came in that could allow the true cost to be established.

But "the valuation and the actual cost are going to end up not too far apart", Mr Stephens said.