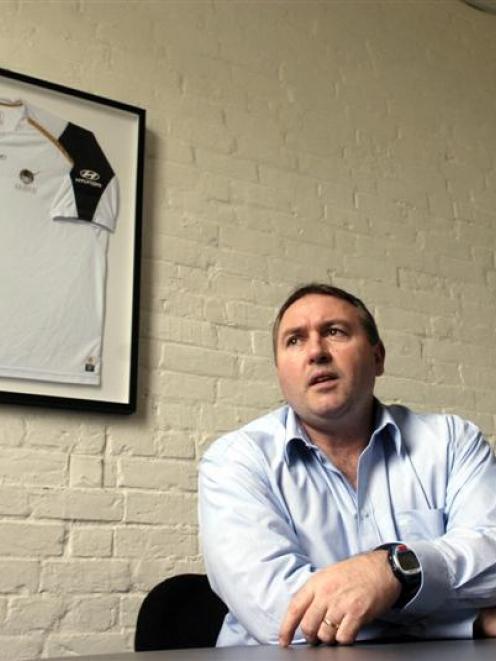 Carisbrook Stadium Trust commercial manager Guy Hedderwick, the man in charge of finding private-sector funding for the Otago Stadium. Photo by Jane Dawber.
At the height of political activity in South Africa that led to the overthrow of the apartheid system and Nelson Mandela's election as president, Guy Hedderwick faced a choice between compulsory military service with the South African Army, or jail.

The new commercial manager of the Carisbrook Stadium Trust chose the former.

That was not an easy decision for someone from a liberal-thinking family, which counted among its friends Donald Woods.

Living through the political and social upheavals of the time has not been the only challenging episode in Mr Hedderwick's life.

The 45-year-old got caught up in a corruption scandal in 2001, when, as acting chief executive of the Border Rugby Football Union, he and former African National Congress MP John Ncinane were accused of fraud in relation to the alleged use of 33,000 rand in development funds for repairs to Mr Ncinane's vehicle.

Charges of fraud were laid against the two, but while all charges against Mr Hedderwick were dropped by the public prosecutor, the union asked him to leave.

If those experiences were not enough, he then took on one of the most challenging roles in New Zealand sport - attempting to make the country's only professional football team competitive, as chief executive of the New Zealand Knights.

Now, his job is to raise 60% of about $55 million of private sector funding needed to build the stadium - one of the most controversial projects seen in Dunedin - by February and to show the balance is attainable.

Apart from the challenge of raising a huge amount of money to help pay for both construction and operation of the stadium, he has already run into strife - and unwanted publicity - for mistakenly sending an email, intended for trust chief executive Ewan Soper, to Bev Butler, president of the Stop the Stadium group.

The email, which followed repeated questioning of private funding arrangements for the stadium, contained the question: "At what point do I tell her to piss off?".

In person, Mr Hedderwick is open and engaging, qualities he will surely need to part business people from their cash.

The husband and father-of-four was born in Port Elizabeth, and brought up on the Eastern Cape of South Africa, finishing his schooling in East London.

He left school in 1981 and completed a bachelor of commerce degree at the Rhodes University, before beginning his military service.

Mr Hedderwick ended up in the army and spent time patrolling black townships under the apartheid regime, during the height of unrest in the 1980s.

He remembers during his last year at school fellow pupils being asked their plans and one saying he would be going to jail, because, as a Jehovah's Witness, he could not serve in the army.

"You either left the country or you went to jail.

"I did it [military service] grudgingly, but there was no choice for us.

"It was fairly difficult, because I came from quite a liberal family."

His family was English-speaking, which, under the social structure of the time, put it down the social hierarchy compared with Afrikaans speakers.

"It was a very difficult and strange time; a confusing and scary time.

"Going through school, I was dead scared they would release Nelson Mandela and he would come out and kill us all."

When Mr Mandela was released, Mr Hedderwick said that fear changed to one of being scared Mr Mandela would die.

The lure of an OE and a plan to play semi-professional cricket took him to England following his military service, and the seeds of a career in sports management were then sown.

When the cricket plan did not develop - "I was not really good enough" - he took a job teaching and coaching cricket at Brockhurst School in England, and running the school's sports programme.

After seven years overseas, he returned to South Africa to spend time with his father, who was dying of cancer.

He took a job in advertising before moving to work with Border Rugby in East London.

It was at Border the fraud allegations emerged, something he said was a political fight against Mr Ncinane that developed into "a dreadful time" in Mr Hedderwick's life, played out on the front pages of newspapers.

He did not let it stop his career.

He worked as chief executive of the Hellenic Football Club in Cape Town, then the Black Leopards football club in the Northern Province of South Africa, before taking the same role at what was then the Football Kingz football team, which developed into the New Zealand Knights.

That job lasted only six games into the 2005 season before "philosophical differences" with club management prompted another move.

A choice between marketing for the Northland Rugby Union or becoming director of boarding and international pupils at Waitaki Boys High School was decided by a trip to Oamaru.

"We have a young family. We looked at Whangarei and we looked at Oamaru . . ."

The proximity to the University of Otago, where his wife is studying, clinched the deal and Mr Hedderwick began running the school hostel and the marketing programme for international pupils.

Two and a-half years later, it was the distance to the university that prompted a move to Dunedin, when Mr Hedderwick's wife tired of the trip south and he applied for, and got, the job with the trust.

Asked how he was coping with the controversial nature of his job, he said any major project with government or ratepayer funding was going to be opposed by some.

The way he looked at it, it was a council project and the trust was required to deliver.

"If you're asking me if I believe in it, yes: I'm a passionate supporter."

That support was informed by his belief in the positive power of sport.

"I have a real belief in sport. People are always looking at the quantitative value of the stadium," he said.

They did not look at what sport brought to young people and the "special bond" that could be developed through sport.

"I would rather their heroes be sports people, instead of pseudo-celebrities.

"The stadium is a wonderful opportunity the city cannot afford to miss."

Mr Hedderwick said despite his feelings, he had to respect the opposition of Stop the Stadium, a group doing what it believed in.

"Bev Butler is obviously very passionate about her stance.

"Obviously, I think she's wrong and she thinks I'm wrong."

His role at the stadium trust was "very simple".

He had to manage a process of finding $45.5 million of capital funding, and the money required for operational funding and bridging finance.

"My job is to get that across the line."

Doing that by February was "no mean feat", he said, but he was confident it could be done.

"The current economic climate is against us but I'm impressed with the long-term vision in this town."