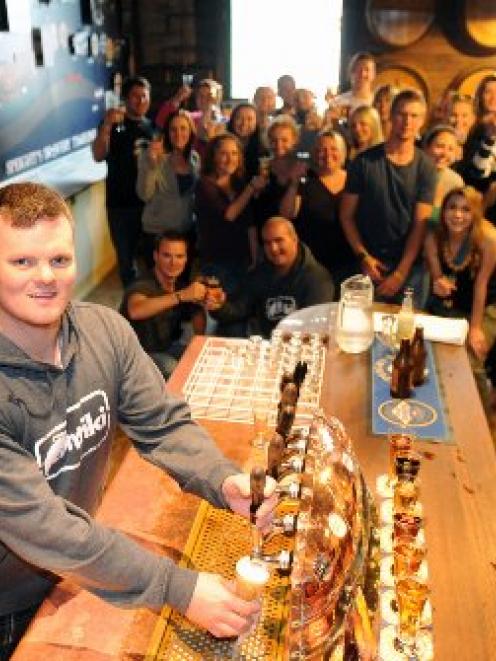 Mathew Beard (27), of Sydney, learns to pour a beer while his Contiki tour party group samples the offerings at the Speight's brewery tour in Dunedin last week. Photo by Jane Dawber.
The return of the world's largest youth tour operator to Dunedin will help boost visitor numbers to the Speight's Brewery by 15%.

Contiki, which is set to celebrate its 50th anniversary, announced last year it would return to Dunedin after an absence of six years.

The city was included in itineraries from October, after the tours could no longer be accommodated on recently refurbished vessels at Milford Sound.

"We went to a number of different areas and said 'what can you offer us instead of doing this overnight at Milford?'

"Dunedin was successful, as they had the best options for our young clients."

Those options include a visit to the Speight's Brewery, Cadbury World, Baldwin St, and optional extras such as the Death Rattle Ghost Walk.

Speight's Brewery tour manager Chris Snow said the tour groups were "fantastic visitors" who were enjoying the city and brewery.

Over the next 12 months, the Contiki visitors to the brewery were expected to increase 15% and, coupled with the Rugby World Cup, help improve on its 2010 visitor numbers.

"It is a good opportunity to showcase the brewery and the brand and how it is connected to the South," Mr Snow said.

Mr Laskey said the tour company, which caters for 18- to 35-year-olds, performed well last year, despite initial concerns over the Christchurch earthquake.

Travellers still wanted to visit the South Island, and the company was expected to confirm extra days in the West Coast and Queenstown areas.

Tourism Dunedin chief executive Hamish Saxton said Contiki was a leader in the youth travel market, and it was "terrific" the tourists were enjoying their time in Dunedin.

"It is such an established brand and, from a marketing perspective, when as a destination you are included in an itinerary, you find independent travellers use their brochures and itineraries to make their own holiday plan."