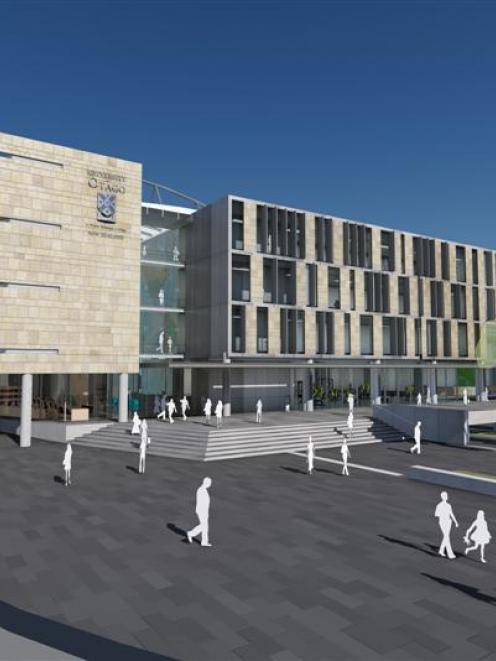 Releasing the design yesterday, he said the Oamaru stone-clad building, linking the University Plaza and the stadium, would be "a major learning and recreational facility next to a world-class covered stadium".

"This will be one of the most exciting developments on our campus for decades.

"Recently I visited two Ivy League universities in the United States and realised that the stadium rising on the edge of our campus will be far superior to theirs.

The world's leading universities have always pursued the ideal of a healthy mind in a healthy body, and this complex . . . will be unparalleled in the southern hemisphere," he said in a statement.

The architects, Warren and Mahoney, had done an excellent job in accommodating the university's academic and recreational requirements, Prof Skegg said, describing the building as "striking", with an "academic presence".

He did not give the cost of the project.

A university spokeswoman said the budget was confidential as construction tenders had not yet been advertised.

The plaza will be owned in common with the Dunedin City Council.

Various suggestions have been made about what might be housed in the university's building, including Student Health services, a child-care centre and research space.

But Prof Skegg said yesterday only the Foundation Studies department, the Unipol sports centre, a physiotherapy clinic and a cafe would be included in the building.

There were plans to build an extension at some time in the future.

The shift to the stadium site would place the department close to the College of Education, with which it had close ties, as well as freeing up the St David St space for other uses, he said.

The new sports centre will replace the facility in Anzac Ave, which cannot accommodate growing demand.

Discussions have been taking place for months on whether the ownership and governance structure might change, and how much money, if any, the student groups might contribute to the new facility.

One scenario was for the student associations to reduce their ownership stakes, contribute a relatively small amount each to the rebuild and retain a governance role.

The university was asked for further comment on the issue but no response was received.

- What: 9663sq m rectangular building providing west wall of the stadium and opening on to University Plaza

- Cost: Still under wraps, but could be $45 million

- Future plans: Second building to be constructed at right angles to this building, providing an L-shaped development