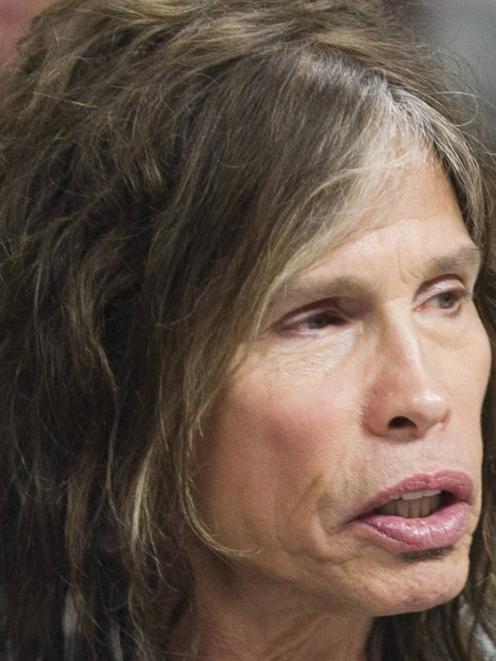 Steven Tyler
A record crowd of up to 40,000 fans could pack Forsyth Barr Stadium when Aerosmith headlines a major rock event in Dunedin.

The best-selling United States rock band - with more than 150 million albums sold worldwide - will perform its only New Zealand show at Dunedin's roofed stadium on April 24, it has been confirmed.

The Grammy Award-winning band, headed by frontman and American Idol judge Steven Tyler, boasts hits including Walk This Way, Love in an Elevator and I Don't Want to Miss a Thing.

Joining them at the stadium will be Australian hard rock act Wolfmother alongside the Dead Daisies - featuring New Zealand-born former INXS frontman Jon Stevens - Wellington-based Head Like a Hole and Diva Demolition.

Tyler, calling from his home in Maui, Hawaii, told the Otago Daily Times his interest in performing in New Zealand- and, in particular, the South - was piqued by descriptions provided by his eldest daughter, Liv, one of the stars of the Lord of the Rings film trilogy.

"Liv did a couple of great movies down there. She said New Zealand was gorgeous and green and was a place you have to visit.''

"The promoters mentioned going to Australia [the band will perform three shows there] and I thought that since we're going to be in that neck of the woods we might as well spread it out a bit.''

He said the show would be as big as it gets for the stadium.

"This is right up there ... it's good for the stadium and absolutely fantastic for the city,'' he said.

The size of the show meant there would be standing room only on the stadium's playing surface, lifting the venue's capacity to 40,000 fans, he said.

The event was expected to begin in the afternoon and continue late into the evening.

Tickets would go on sale on March 4, although prices and other details were yet to be confirmed.

However, with expectations fans would travel from around New Zealand and even from Australia, Mr Burden said he was hoping for a sellout.

Aerosmith formed in 1970 and would appeal to a wide age range, including Dunedin students, fans from elsewhere in New Zealand and even some ''die-hard'' supporters from Australia, he said.

''I think you will find there will be an awful lot of people that travel from all around New Zealand to come to this,'' Mr Burden said.

McManus Entertainment New Zealand general manager Jackie Sanders hoped the mix of support acts would also ''tip the balance and take this to a gig where it's going to be a 40,000 crowd''.

The announcement caps a stellar start to the year for the company running the stadium, which has so far secured headline events including Nitro Circus, Ride the Rhythm, Winery Tour, the Warriors, All Whites and Phoenix, and Grammy award-winning artist Paul Simon.

Ms Sanders said Aerosmith had time for only one show in New Zealand before continuing its Global Warming tour in Australia, and Vector Arena in Auckland was considered too small for the ''pretty huge'' show.

Promoters had assessed outdoor stadiums across the country before settling on Dunedin's roofed venue, because of the weather guarantees it offered, she said.

Equipment would be flown into North Island centres or Christchurch and then trucked or shipped by sea to Dunedin, she said.

''We are pretty confident we have made the right decision in coming to Dunedin and it's going to work for everybody,'' she said.

Mr Burden would not discuss details of the ''confidential'' deal between the parties, or say if DVML was guaranteed to make a profit.

''I am certain the visitor economy will be delighted by another event of this magnitude hitting town ...there will be many businesses looking forward to this event.''