Which way will the city go? 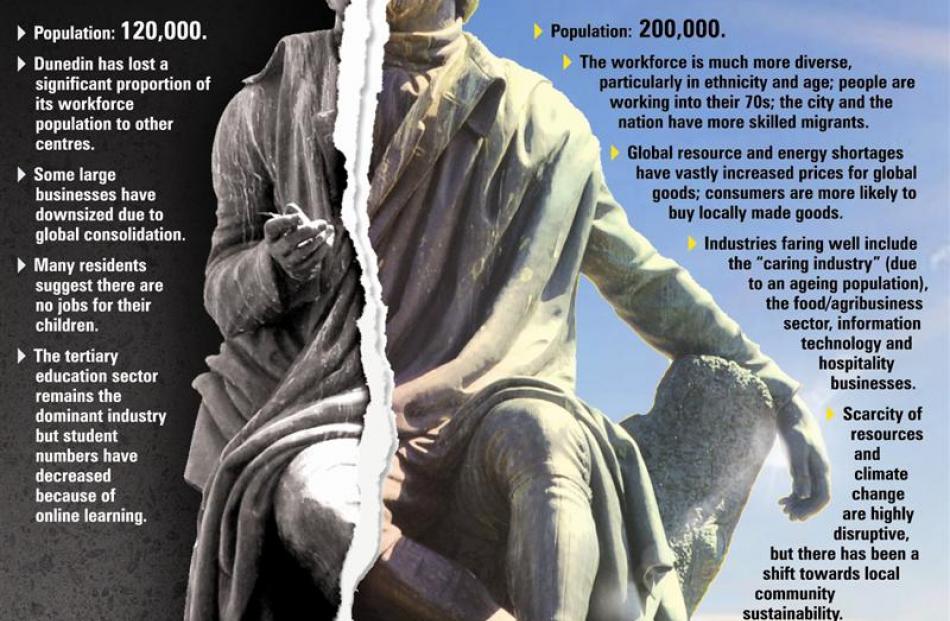 Dunedin needs to adjust its attitude if its economy and population is to grow by 2030, a leading agribusiness executive says.

AbacusBio partner Anna Campbell was commenting on the city's prospects after the release of a report, The Future of Work: Dunedin, by the University of Otago's Business School.

After surveying business leaders in the city, the report writers came up with two scenarios for where Dunedin could be in 2030.

One was bleak and the other bright.

In the bleak scenario, Dunedin stagnates, loses more business and has a population of 120,000.

In the bright scenario, Dunedin's population has grown to 200,000, the work day has become more flexible, the city is more multicultural and businesses are thriving.

Dr Campbell said the bleak scenario was entirely possible, and to avoid it the city needed to embrace immigration, change its attitude towards business and decrease its reliance on the tertiary education sector.

Dunedin people had a negative attitude towards business, which held the city back, she said.

''It's an attitude that because you are in business, you are viewed as without a social conscience or as a greedy corporate.''

That was not the reality, as ''high integrity'' people were doing exciting things at Dunedin businesses, she said.

As part of broadening the city's economy, she believed there should be more focus on food production.

She did not see the city economy moving completely away from producing solid products such as food to ''weightless'' products like software.

''Why would we, when there is a world food shortage and we are so good at food production?''

Increased immigration would bring investment, new ideas and vibrancy to the city.

An example of how positive immigration could be for the city was consultant Bruno Santos, who came to work for AbacusBio from Brazil three years ago.

Finding useful employment for their spouses or partners was one of the biggest challenges, Dr Campbell said.

Mr Santos said the quality of life in Dunedin was fantastic, but a lack of jobs meant that many of his friends had left the city.

The report's authors, Sara Walton, Diane Ruwhiu, Paula O'Kane and Virginia Cathro, said most participants said the nature of work would change by 2030 and ''will be ever more challenging''.

''We need to start planning for the future now and incorporating ideas into current business planning and strategic thinking,'' they said.

''This report simply outlines what people are thinking about, but we believe it will be the impetus that will kick-start a collective approach to capture and plan for what are presently individual concerns,'' she said.