Prince William at aviation museum: 'Start her up' 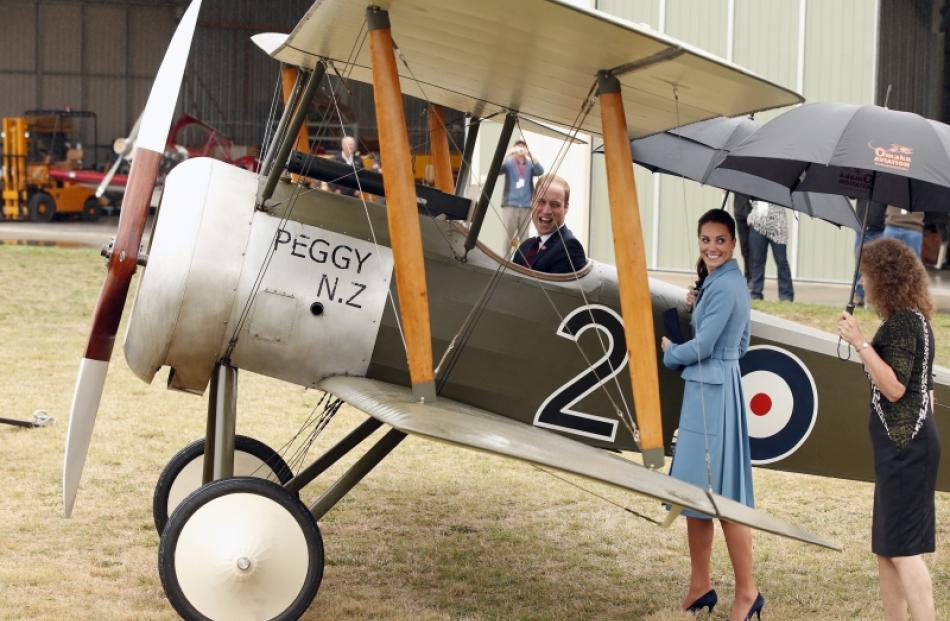 Prince William, Duke of Cambridge climbs in to the cockpit of a WWI bi-plane as Catherine, Duchess of Cambridge looks on during a visit to Omaka Aviation Heritage Centre on Day 4 of a Royal Tour to New Zealand. Photo by Getty

The royal couple have been given a personal tour of the Omaka Aviation Heritage Centre's collection of vintage planes by Sir Peter Jackson.

Royal watchers have migrated to the Centre for the second stop of Prince William and Catherine's stint in Marlborough.

Wet weather, which held off for this morning's ceremony at Seymour Square, failed to dampen the crowd's enthusiasm, which cheered as Kate and William arrived.

The pair were greeted by Sir Peter.

More than dozen aeroplanes from World War 1 and World War II were wheeled out of their Omaka Aviation Heritage Centre hangars in preparation for the royal couple's visit.

The Duke and Duchess were wowed when they entered the world-renowned museum.

A 26 foot-long grey WWI relic, a Caproni CA 22, greeted the royal pair for the start of the tour by Sir Peter Jackson.

Kate let her husband go ahead with the director while she walked with centre chief executive Jane Orphan.

Sir Peter, wearing a double-breasted jacket and tan trousers, strolled around his prize exhibits with a hand in his pocket, reeling off historical facts and insight.

Prince William, a pilot, was full of questions, becoming animated with the WWI and WWII planes hanging from the ceiling.

Kate soon joined in with the unique personalised tour.

The royal couple then disappeared from sight as Sir Peter continued the tour.

They then emerged to be greeted by World War Two Spitfire pilot Harcourt "Bunty" Bunt.

Sir Peter left it to Bunty to explain the story.

The couple listened intently to the amazing war tale.

Caldwell got into trouble behind enemy lines.

At 5000-feet he stepped out onto his wing - a fact that amazed the couple - and hung on to wing to control the plane and jumped off.

"He brushed himself off," and made contact with trenches, Bunty said.

"And how fast was he going when he jumped off?"

Sir Peter explained how he might've done it.

She asked if he told his story while he was alive, to which her husband added: "He probably dined out on it for some time."

Bunty went on tell his life story. The royals were deeply interested in the tale and thanked Bunty for sharing it.

They were also shown the remarkable life-like exhibition of the infamous Red Baron's last flight when he was shot down over British lines and killed in 1918 - after a record 80 planes brought down.

Sir Peter explained that Australian troops were first on the scene and they proceeded to strip the plane for mementoes. It was a fact that brought a chortle from the prince. He wondered where the paraphernalia was now.

Sir Peter explained how they got the scene historically accurate, even down to the Somme field of mud it landed in.

William showed insight by noting the reason why so much is known about the crash scene is from those Australians.

At the end of the 30-minute tour, the Duke and Duchess had a brief look in the gift shop, full of scale plane models.

"Oooh," the princess cooed when she opened it.

The helmet was made by Trevor Lamb, using deer leather and has been custom dyed and finished, with a lining of New Zealand possum fur, Ms Orphan said.

The couple were then taken outside where several of the antique planes were lined up in mild drizzle.

The flying prince then sat in the cockpit of a Sopwith Pup biplane.

A large waiting crowd clapped and cheered as they strolled around.

"I love you," one young girl called out.

Plane owners Bill Reid and his wife Robyn told them it took ten years to restore the plane - the only kind of its type.

William sat at the controls for some time, amazed with the cockpit controls, all from the war period, painstakingly restored.

Sir Peter, a benefactor of the Omaka Aviation Heritage Centre trust, said it was great to have the royal couple at the museum.

Prince William, who is an avid flyer, asked plenty of questions throughout the tour, he said.

In the couple's final moments of their visit to the centre, Sir Peter and Prince William could be heard joking about flying in New Zealand.

"I don't know what the paperwork is," Sir Peter said to the Duke.