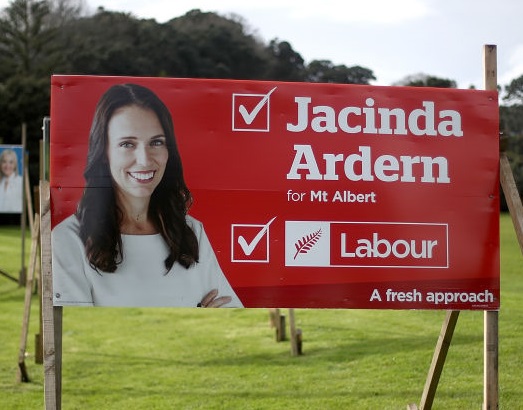 An election billboard for Jacinda Ardern in Auckland. Photo Getty
Jacinda Ardern has announced a portfolio reshuffle caused by her ascension to Labour leader.

Ardern retains Children, Arts Culture and Heritage, and picks up the Security and Intelligence portfolios.

The man she replaced, Andrew Little, has been handed her Justice and Small Business portfolios.

He also picks up ACC off outgoing MP Sue Moroney and retains the "New Economy" portfolio.

Little moves to seventh spot on Labour's front bench. That position had been occupied by new deputy leader Kelvin Davis, who moves to the No 2 spot.

Apart from that movement the caucus rankings remain the same.

Other new responsibilities include Adrian Rurawhe picking up Maori Development from Davis.

After a string of dire poll results, Little stood down as leader on Tuesday. A few hours later Ardern, his 37-year-old deputy, was elected unopposed to the position.

Te Tai Tokerau MP Kelvin Davis was chosen as her deputy unopposed. Along with Labour's other Maori MPs, Davis had chosen to remove himself from the party list for the general election.

However, Labour's constitution requires the party's leader and deputy to be listed at one and two.

After being elected Ardern said she would take stock for 72 hours before revealing any changes to Labour's election campaign and policy.

With the election on September 23, the reshuffle is a minor one and will not ruffle any feathers.