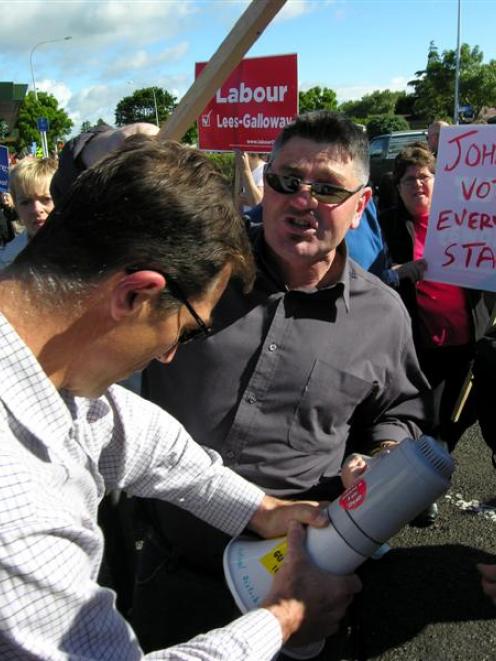 Mr Key flew in to Palmerston North on the final day of the campaign as part of a whistlestop tour of eight towns and cities.

However, a scuffle developed at a street corner rally minutes before Mr Key arrived.

It started when a National supporter tried to wrestle a megaphone from Labour supporter Wayne Ruscoe who was chanting "John Key is the anti-Obama".

The supporter, who refused to be named but told reporters he was a former National Party member, ripped the megaphone off Mr Ruscoe and told him to move on.

Police initially refused to interfere, but later stood between the two.

Another National supporter, retired pharmacist Cameron Duncan, also took issue with Mr Ruscoe telling him: "Why don't you go jump into bed with your lesbian partner".

He also tried to take the megaphone off Mr Ruscoe.

Mr Ruscoe said he was considering making a complaint to police.

Senior Sergeant Brett Calkin, who was at the rally, said he had spoken to the first National supporter and did not intend to take it further, as there appeared to have been scuffling on both sides.

However, it was clear to those who witnessed the incident that the National supporter had forcibly taken the megaphone off Mr Ruscoe.

Mr Key later told reporters the overflowing passions were due to the strong campaign National had run, but he did not want to see that get out of control.

He said he did not condone any actions from supporters that stepped over the line.

Mr Ruscoe was one of three groups protesting at Mr Key's rally. The others were Green supporters and a group protesting against what they said were National's plans to privatise health.

Mr Key initially planned to spend about an hour at the strip mall, where about 100 National supporters had gathered, but cut short the rally and walkaround to have a coffee at a downtown cafe.

Mr Key entered the final day buoyed by four polls in the last 24 hours showing it has enough support to lead the next government.

Earlier today he shook hands and chatted to commuters at Wellington railway station.

He was challenged by one young voter on National's plans to introduce a 90-day probation period for new workers, but received a cordial response from most others.

About 50 placard-bearing National supporters turned up to see Mr Key.

The Wellington campaigning is part of a whistle-stop tour that has seen Mr Key charter a plane to blitz eight towns and cities in the last two days of the campaign.

Mr Key will fly into Palmerston North and New Plymouth today before ending up in Auckland where he will hit the malls and hold a series of rallies.

He will close his campaign with a rally in his Helensville electorate about 6pm.

All campaigning as well as media reports that could sway voters are banned from midnight.