Probe begins after plane slides off runway into Florida river 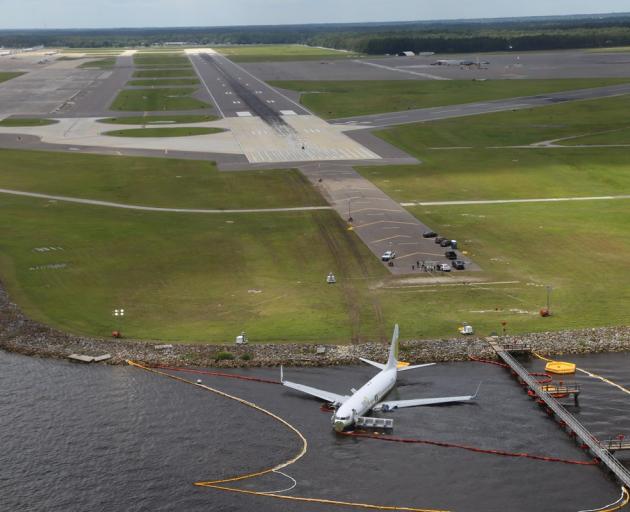 Officials raised the count of people injured to 22, from 21, after a three-month-old child was admitted to a local hospital for observation, Photo: NTSB/Handout via Reuters
Federal investigators on Saturday began searching for what caused a Boeing jetliner with 143 people on board to slide off a runway into a shallow river while landing at a Jacksonville, Florida, military base during a thunderstorm, injuring 22 people.

The Boeing 737-800 chartered by the US military was arriving from Naval Station Guantanamo Bay in Cuba with 136 passengers and seven crew members when it slid into the St. Johns River at the end of the 9,000-foot runway at Naval Air Station Jacksonville on Friday night, authorities said.

Officials raised the count of people injured to 22, from 21, after a three-month-old child was admitted to a local hospital for observation, Capt. Michael Connor, commanding officer at the Jacksonville station, told a news conference.

National Transportation Safety Board investigators have recovered an undamaged flight data recorder and it has been sent to Washington for analysis, NTSB Vice Chairman Bruce Landsberg said at the news conference.

"We expect to get a very full report on that shortly," he said. 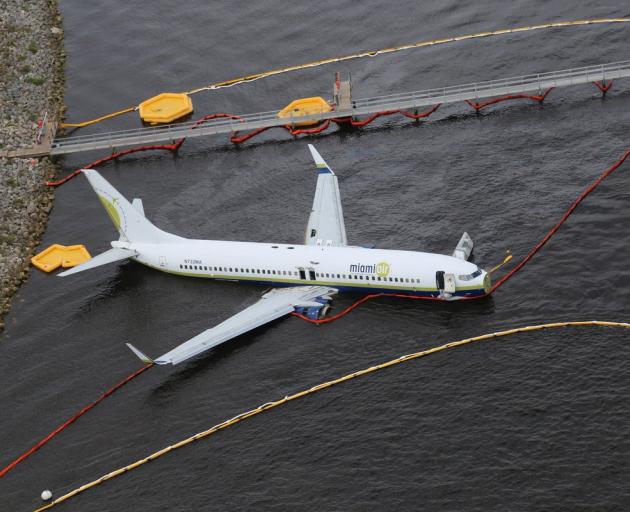 Aerial view of the Miami Air International Boeing 737-800 that overran the runway at NAS Jacksonville. Photo: NTSB/Handout via Reuters

Investigators said they are hoping to interview the crew on Sunday. The cockpit voice recorder is in the tail of the plane and submerged underwater. Investigators will not be able to recover it until the aircraft is lifted out of the water, Landsberg said.

"We are going to be very careful in preserving the perishable evidence," he said.

Officials were determining the best way to remove the plane from the water, NTSB investigator in charge John Lovell said.

"There are some ideas being floated in terms of putting some sort of cushioning below it ... and moving it on those cushions," he said.

The US Coast Guard placed floating booms around the jetliner to contain leaking jet fuel in the water, Landsberg said.

The plane, chartered from Miami Air International, was attempting to land at about 9:40 p.m. local time amid thunder and lightning when it slid off the runway and came to rest in the shallow water of the river, authorities and passengers said.

Landsberg said investigators will look closely at whether the weather played a role in the incident.

"It is a miracle. We could be talking about a different story," Connor said early on Saturday.

Miami Air International is a charter airline operating a fleet of the Boeing 737-800, different from the 737 MAX 8 aircraft that has been grounded following two fatal crashes involving that plane.

Representatives of the airline did not immediately reply to requests for comment.

A spokesman for Boeing Co said that the company was aware of the incident and gathering information.

The charter company is contracted by the military for its twice-weekly "rotator" round-trip service between the US mainland and Guantanamo Bay, said Bill Dougherty, a spokesman for the Jacksonville base.