US troops killed by Afghan pilot 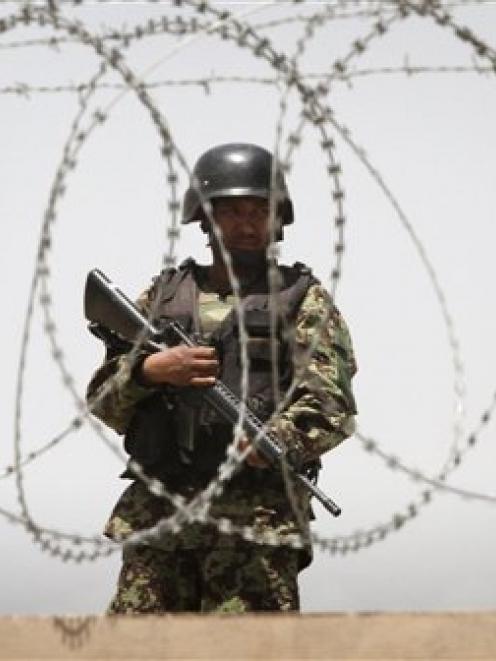 An Afghan soldier stands guard on a roof of one of the gates to Kabul's airport following a shooting incident on Wednesday. (AP Photo/Musadeq Sadeq)
An Afghan military pilot has killed eight American soldiers and a US contractor at the Kabul airport after they argued at a meeting, officials said.

It was the deadliest episode of an Afghan turning against his coalition partners. The veteran military pilot was killed during the attack and five Afghan soldiers were injured.

Pentagon spokesman Col. Dave Lapan said all nine of those killed by the pilot were Americans. The Afghan Defence Ministry said the pilot fired on the Americans after an argument in an operations room of the Afghan Air Corps at Kabul airport.

"Suddenly, in the middle of the meeting, shooting started," said Afghan Air Corps spokesman Col. Bahader, who uses only one name. "After the shooting started, we saw a number of Afghan army officers and soldiers running out of the building. Some were even throwing themselves out of the windows to get away."

An Afghan pilot who spoke on condition of anonymity, identified the gunman as Ahmad Gul from Tarakhail district of Kabul province.

"He was 48 years old," Sahibi told Tolo, a private television station in Kabul, "He served his country for years. He loved his people and his country. He had no link with Taliban or al-Qaeda.

"He was under economic pressures and recently he sold his house. He was going through a very difficult period of time in his life."

Afghan President Hamid Karzai condemned the shooting and offered his condolences to the relatives of the victims. He said those killed were trainers and advisers for the Afghan air force. The president ordered his defence and security officials to investigate the recent incidents to determine why they occurred.

The Taliban claimed responsibility for the attack. In a statement, Taliban spokesman Zabiullah Mujahid said the gunman was impersonating an army officer and that others at the facility helped him gain access.

"An argument happened between him and the foreigners and we have to investigate that," Azimi said.

Taliban insurgents have stepped up their attacks on government and military installations across Afghanistan.

On April 18, an insurgent managed to sneak past security at the heavily fortified Afghan Defence Ministry compound in the capital and killed two Afghan soldiers and an officer.

Two days before that, an Afghan soldier walked into a meeting of NATO trainers and Afghan troops at Forward Operating Base Gamberi in Laghman province in eastern Afghanistan and detonated a vest of explosives hidden underneath his uniform. The blast, the worst before Wednesday's shooting, killed six American troops, four Afghan soldiers and an interpreter.

On April, 15, a suicide bomber dressed as a policeman blew himself up inside the Kandahar police headquarters complex, killing the top law enforcement officer in the restive southern province.

In northwest Afghanistan, a man wearing an Afghan border police uniform shot and killed two American military personnel on April 4 in Faryab. The gunman was upset over the recent burning of the Quran at a Florida church, according to NATO intelligence officials.

In February, an Afghan soldier, who felt he had been personally offended by his German partners, shot and killed three German soldiers and wounded six others in the northern province of Baghlan.

According to information compiled by NATO, half of the 20 incidents involved the impersonation of an Afghan policeman or soldier. The cause of the other 10 incidents were attributed to combat stress or unknown reasons. NATO said that so far, there is no solid evidence - despite Taliban assertions - that any insurgent has joined the Afghan security forces for the sole purpose of conducting attacks on coalition or Afghan forces.