Honestly, I'd be delighted to be wrong

This is the heart of South Dunedin, for many in the community. But NZ Post and Kiwibank are pulling out of King Edward St and we've been wondering what the local politicians are doing about it. PHOTO: PETER MCINTOSH
Since yesterday morning's column berating Dunedin South MPs past and present for their lack of voice over the closing of the NZ Post and Kiwibank there, I have been told in no uncertain terms, by them, they are actually doing something about it.

Well, that's great. I'm very pleased to hear it. I don't mind being wrong if they really have their noses to the grindstone and a determination to get a good result.

The fact remains, however, that those locals who have called me, or written letters to the ODT about this, have not heard the politicians making much of a fuss.

Just to recap - I had a swipe at former NZ Post chairman and Dunedin South MP Sir Michael Cullen, incumbent Labour Party MP Clare Curran and Dunedin city councillor and former MP David Benson-Pope for their silence on the closure.

Cr Benson-Pope emailed me early yesterday morning to say: "You probably need to look at the minutes of the DCC economic development committee of May 22, in particular items 3 and 8A, and then work out how you propose to correct the false statements you made this morning."

So I did that and eventually found, in the minutes on the council website, a resolution, after discussion, that the committee: "Conveys to NZ Post its concern at the potential downsizing of the NZ Post/Kiwibank operations at Dunedin North and South Dunedin and communicate that concern to local members of Parliament."

Does a council resolution count as being vocal on the issue?

Anyway, I asked Cr Benson-Pope if a response had been received. Apparently so, as "senior staff are meeting with NZ Post" this morning, he says.

We await with interest what the outcome of that meeting will be. Let us hope it is a good one.

Ms Curran also phoned to point out she was actually voicing concerns.

She said she had written to the ministers responsible for Kiwibank about it and was keenly awaiting the petition now being circulated and due to be presented at the end of the month, which "may result in an inquiry".

As I said to Cr Benson-Pope when he took me to task, I would be chuffed to little mintballs to be wrong about there being a lack of action.

It sounds like there could be some developments on the issue soon, so keep reading the ODT for news of those.

Reminiscences of our former Labour prime minister continue to arrive.

"I have many memories of Norman Kirk, as I grew up in his shadow.

"He lived two blocks away from our home in Kaiapoi. My youngest brother Ross and the Kirks' oldest son Philip were best mates so our paths crossed often.

"Norm encouraged my mother to stand for the Kaiapoi Borough Council, which she did but was not elected. On Christmas Eve, Norm, as the mayor, would take his family a few blocks up the road to the main shopping area of the town and mingle with anyone who wanted to talk to him. So approachable to everyone.

"Coming home each night from working on the railway, he would mix up concrete and make blocks to build a house next door.

"I spoke to Norm at the Kaiapoi Primary School centenary where he was guest of honour in 1973.

"I said to him that when he and his family, and me and my wife, were dining at separate tables in the same Kaikoura restaurant while we were all on holiday, I would like to have introduced my wife to him. But I thought he would be pestered so much by people that I didn't do so. 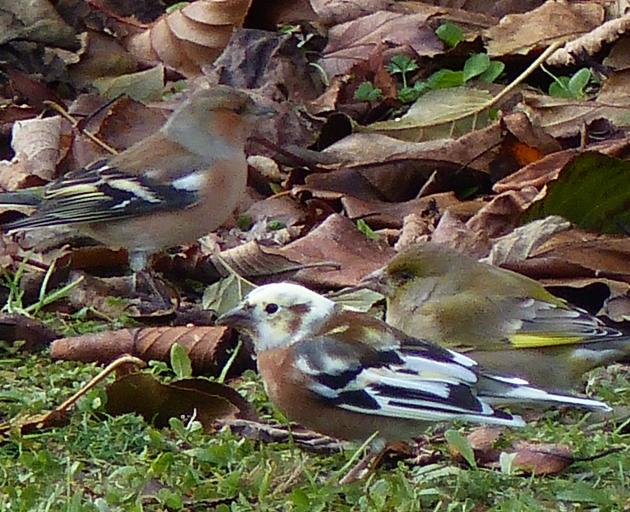 The albino chaffinch which has made itself at home in Jim Fraser's garden. It's certainly unusual for a chaffinch to have green-tinged feathers. Or is it? PHOTO: JIM FRASER
"He said, `Barrie, you should have introduced your wife'. He was a great man."

Jim Fraser's oddly coloured chaffinch has elicited quite a twittering from readers.

Jim agrees it is likely to be an albino and a chaffinch-greenfinch hybrid as suggested by Richard Cook of Tapanui.

However, Nancy Wilson says a chaffinch and greenfinch would not breed.

Mary Thompson, who is Otago branch representative for Birds New Zealand, has emailed this explanation.

"It is always exciting to spot a different, unusual bird. This one is a partially leucistic (from Greek for white) chaffinch.

"Leucistic birds have a lack of dark pigment in some or all of their feathers. It is caused by genetic mutations in pigment cells that prevent black pigment, melanin, from being properly deposited in the feathers.

"In this bird the mutation has caused the white head and extra white on the wings. It is not a true albino, as it has normally coloured eyes, beak and legs.

"Leucism can sometimes make identification more of a challenge. It is rare to see leucistic birds, but partially leucistic sparrows, silvereyes, blackbirds and fantails have been reported over the years by participants of the annual Garden Bird Survey, running this year from June 30 to July 8.

"An almost completely white spotted shag lived in Otago Harbour in 2016 and was often seen fishing and roosting with other shags on Quarantine Island.

"Birds with this condition do face challenges in the wild, as they are more conspicuous and thus prone to predation. The melanin pigment also gives strength to feathers so white feathers wear faster and can make flight more difficult."

Sorry all. No column on Monday, as I'm having a day off. Back as usual on Tuesday.