Freedom campers at boat ramp 'not a good look' 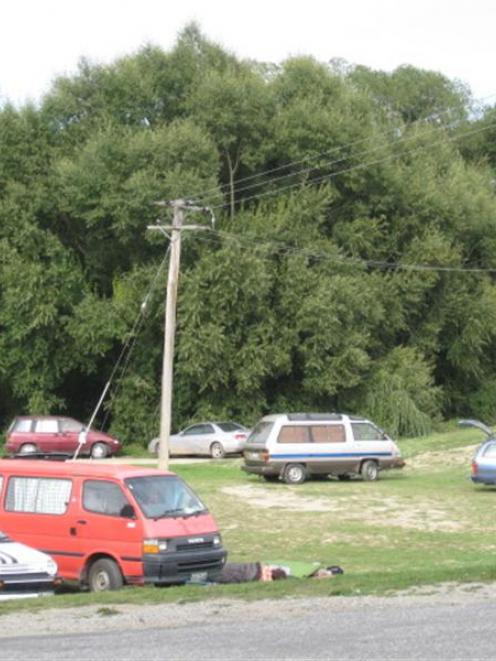 The man, who declined to be named, contacted the Otago Daily Times to complain that up to nine vehicles were parked near the boat ramp some evenings in recent weeks. People were sleeping in the vehicles and outside on the ground.

There are toilets in the area "but it was never designed as a camping spot", he said.

Although the campers were not leaving rubbish or waste, it was "not a good look" to have people "sleeping rough"in that location, near the Alexandra road bridge. It also deterred others from using the area for recreation, he said.

"I assume the campers are people doing seasonal work here, so they're working and living here but using the system, really [by not paying for accommodation], and getting away with it.

"I hate to think what visitors to the town think ... they must wonder what they've struck."

It was ironic that the campers were "only a stone's throw" from the front door of the Central Otago District Council headquarters, he said.

Council district development manager Anne Pullar said the council had not received any complaints about campers in that area. She agreed it was "not designed" as a camping spot but said the issue of freedom camping was a complex one.

The council, in association with an outdoor recreation working party, had developed a camping strategy last year and sought feedback from the public. It was now working at implementing the recommendations made as a result of that consultation and hoped to have "something in place" by next summer.

The document covered all types of camping, from self-contained campervans and motorhomes to tents and camping in the open air.

"We're also working in collaboration with the Department of Conservation and Linz and Contact Energy as well. Land near the lake and rivers is a popular spot for campers."

The Department of Internal Affairs is developing regulations so infringement notices can be issued to people breaching a camping bylaw, rather than the councils having to pursue the breach through the courts.

"This would create something that can be used by all local authorities, giving us a mechanism to issue tickets for camping breaches," Ms Pullar said.

Accommodation for seasonal workers was another complex issue.

"The horticultural sector has worked hard on this one and employers have done well in providing accommodation for workers. They've done the best they can but you can't force employees to use it."

There should be no active marketing of freedom camping in the district, the camping strategy said.

The working party was looking at providing designated spaces for camping and ways to manage freedom camping, she said.

The beauty of the surroundings was the main attraction for a German tourist camping in the spot.

The 23-year-old woman, who gave only her first name - Jule - was on a working holiday around New Zealand with a friend and had spent several nights camped in a van near the boat ramp.

"Mostly we stay at Doc campsites, but there's none at Alexandra.

"This is a beautiful spot, directly by the river and there's toilets and flat land for parking. We're not in front of any houses ... and of course, it's free," she said.

The campers were not causing any harm and were spending money in the town, she said.

Most nights there were several vehicles parked at the site, but the occupants stayed only a night or two, she said. The campers were aged between 20 and 30 and were all travelling independently.