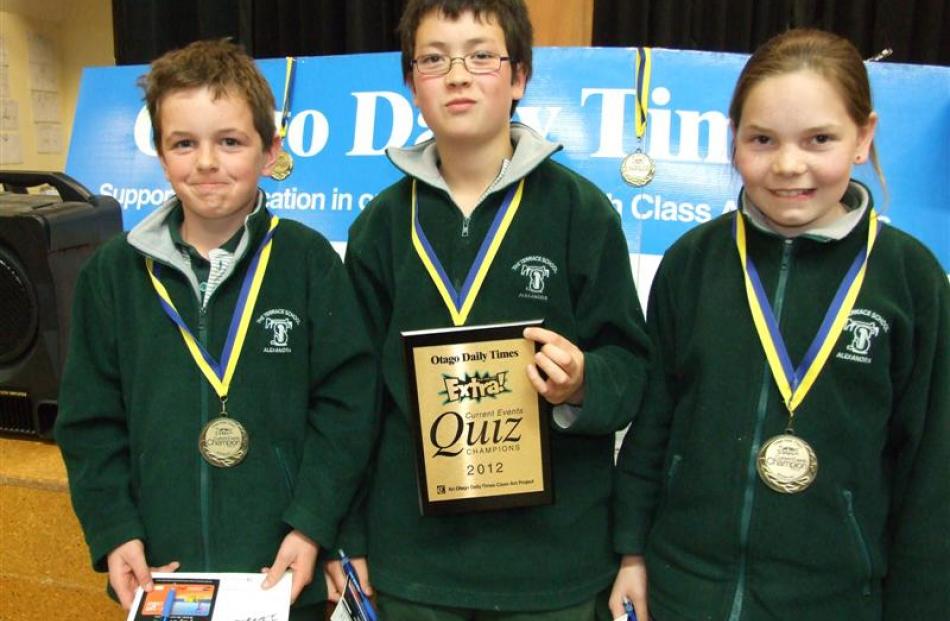 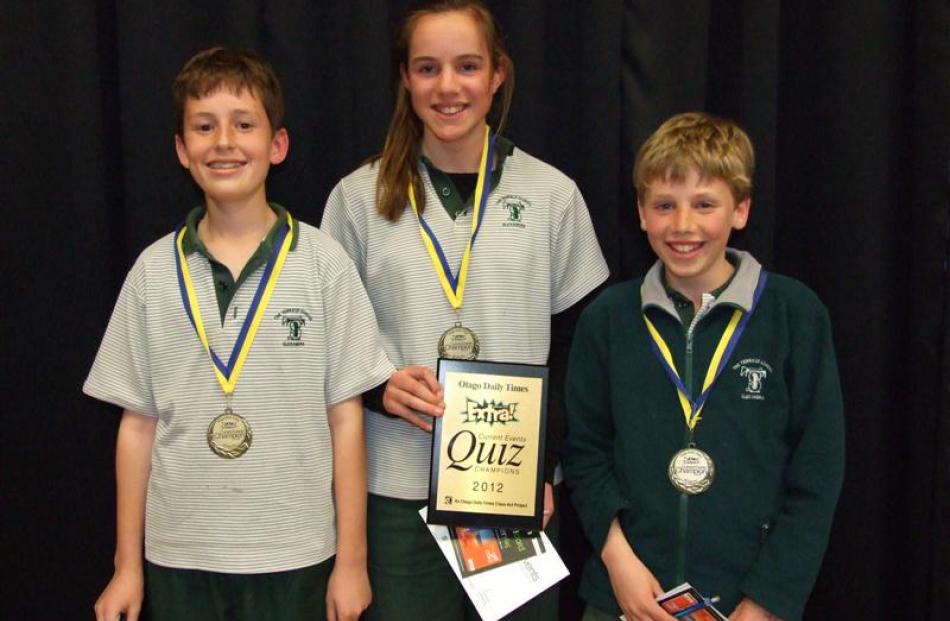 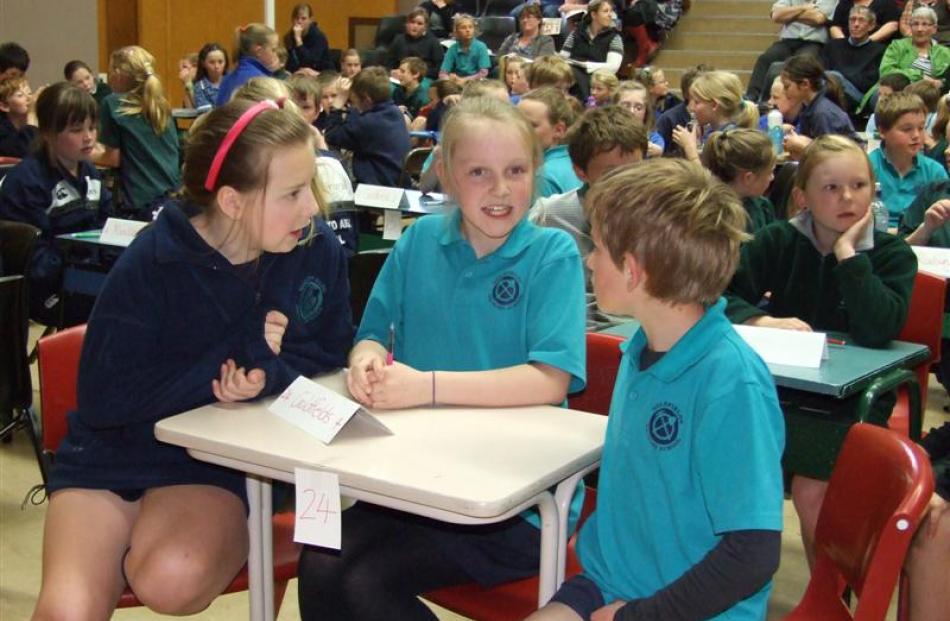 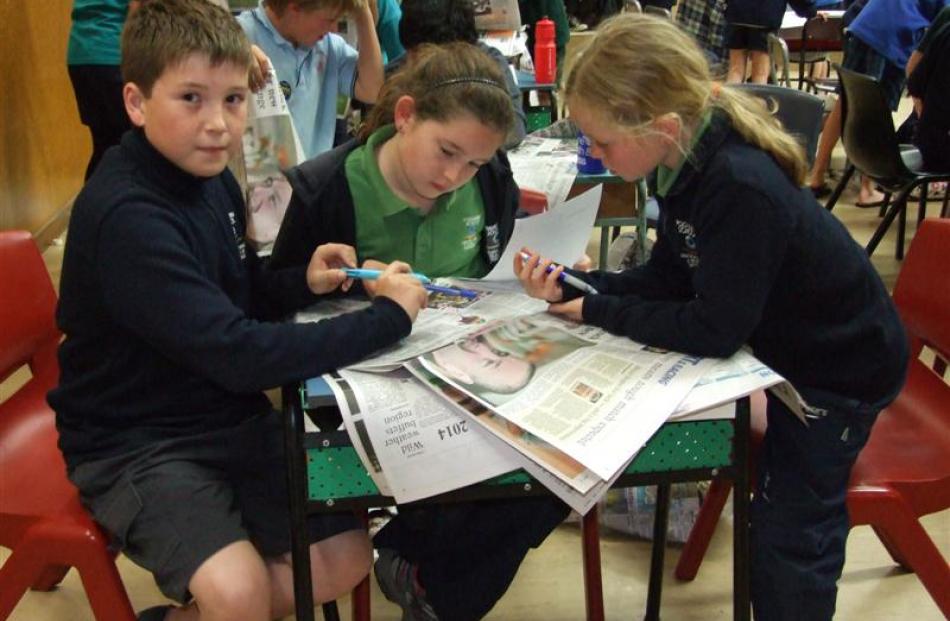 Poolburn School pupils (from left) Fynn Goodlass (10), Shaye (11) and Anna (10) Scott pore through the paper to complete their answers. 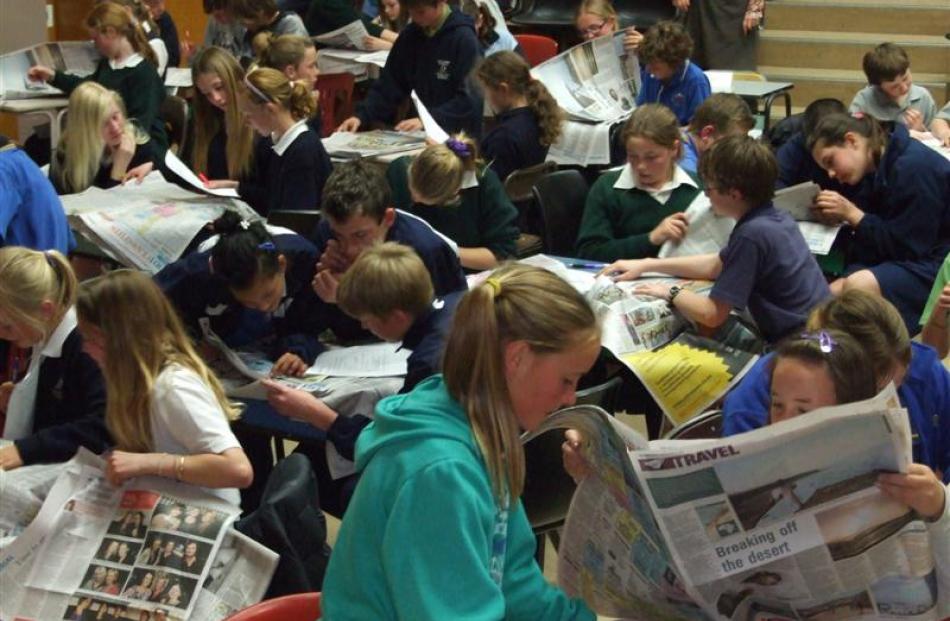 Year 7 and 8 pupils "scavenge" through the newspaper for answers. Photos by Lynda van Kempen.

Lady Gaga, John Key and the Earnslaw were among the keys to success in the Central Otago finals of the Otago Daily Times Extra! current events quiz in Cromwell yesterday.

Twenty-nine teams of three pupils lined up for the year 5 and 6 quiz, and 42 teams for the year 7 and 8 section.

The Terrace School in Alexandra had the most reason to celebrate as its teams won both age groups.

"We've got pretty much a full house and it's a good representation from most of the schools around Central Otago," quiz co-ordinator and Extra! editor Ivan Behrnes said.

Winners of the year 5 and 6 section with 94 points out of 100 were The Terrace 1 - Mat Johnston, Philipp Morgenstern, and Abby Golden.

The points they dropped were in the "who or what am I" round, where they were reluctant to gamble by guessing the answer too soon, and in the cartoon round, which was very hard, Abby said.

She was in the team which was placed second overall last year.

Terrace 2 was placed second on 92 points and Goldfields 3 was third, just one point behind.

In the year 7 and 8 section, James Sawers, Hannah Heyward and Sam O'Brien took top honours with 96 points out of 100. Last year, James and Sam won the year 5 and 6 final while Hannah was in a team placed second.

The only points they lost were in the "who am I" round "and we also mucked up the name of [singer] Adele.

We just made up her last name because we had no idea," James said.

Cromwell College 11 was second on 95 points and The Terrace 4 and Arrowtown 4 tied for third on 90 points.

Teams faced 10 rounds of questions, which canvassed New Zealand and international mapping, countries' flags, cartoons and newsmakers. One round involved a "scavenger hunt" through the newspaper to find the answers.

Today is the turn of year 9 and 10 pupils and 36 teams will vie for the title of Central Otago current events champion.

The quizzes are also staged in Dunedin, Christchurch and Timaru and more than 1300 pupils are involved.

ODT Extra! quizzes are part of the newspaper's Class Act project, which celebrates the excellence of young people.