Extra! Current Events Quiz years 7 and 8 winners (from left) Ryan Shields, Jackson Collier and Matthew Nevill (all 12) of Clyde School, were also second overall in the regional final of the Extra!spelling quiz held earlier in the year. Photos by Lynda... 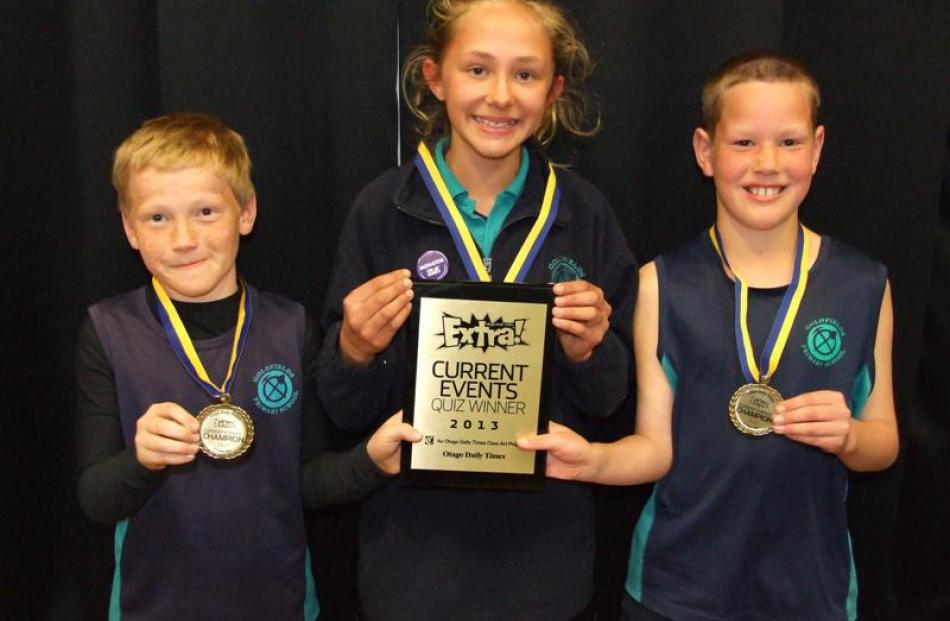 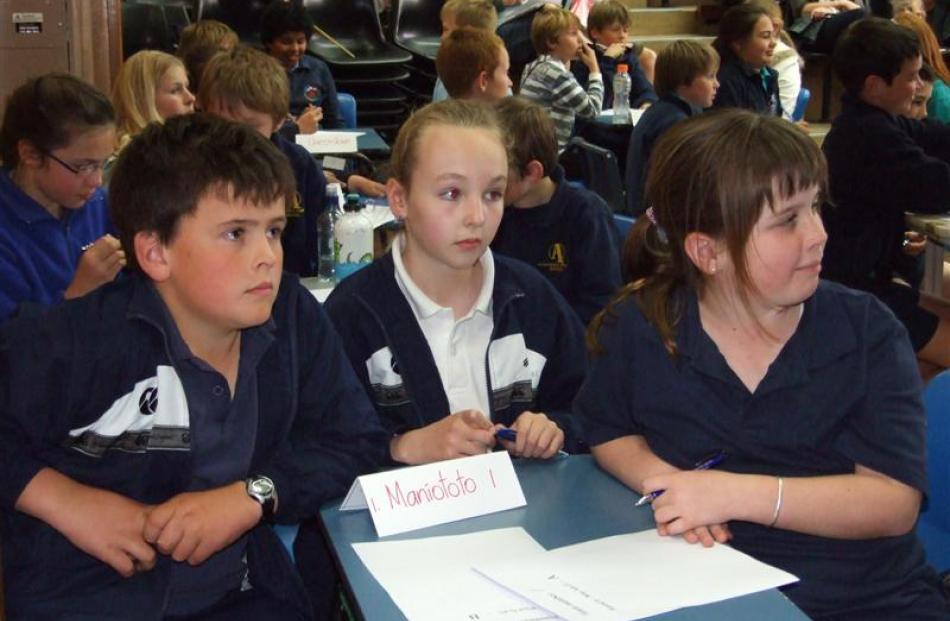 Maniototo Area School pupils (from left) Mitchell Duncan (10), Anna Clarke (11) and Paris Anderson (10) wait for the next round in the current events quiz. 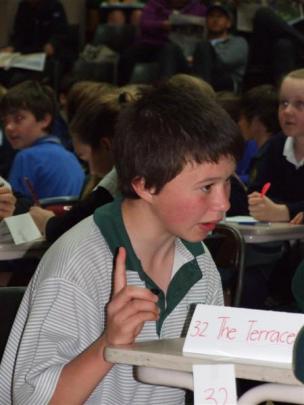 James Officer (13) of The Terrace School, Alexandra, comes up with the answer. 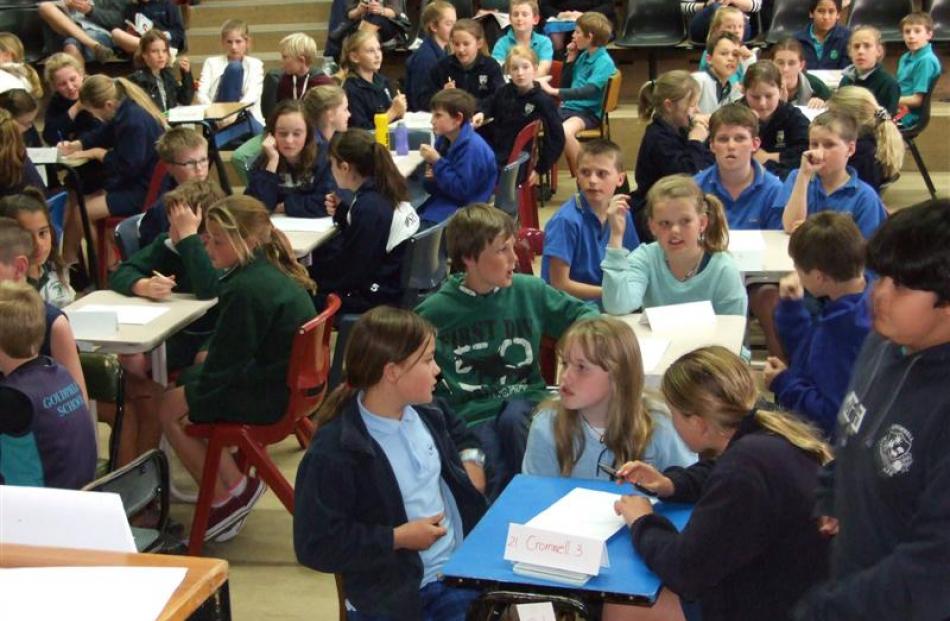 Years 5 and 6 teams ready for the next round of competition. 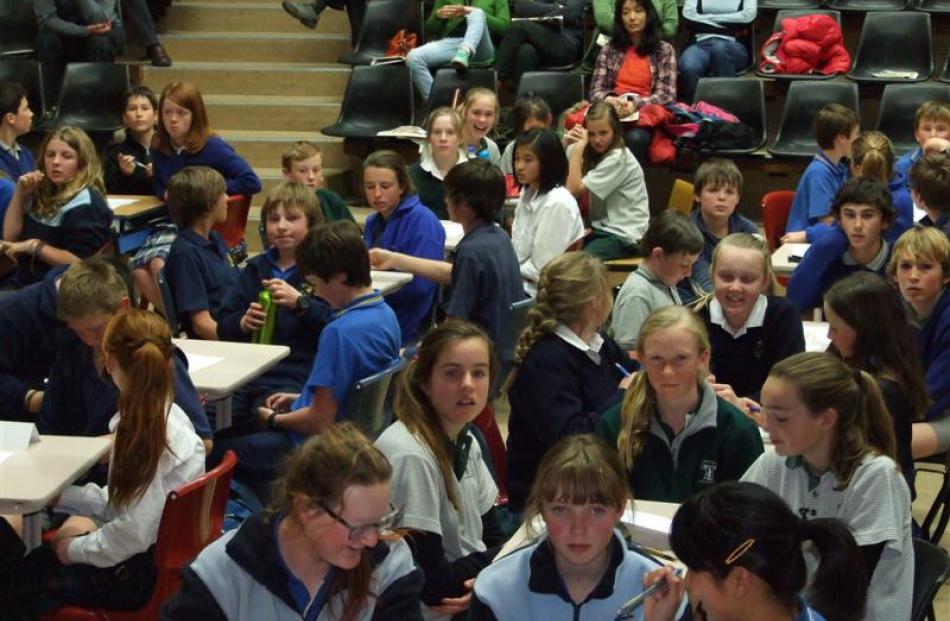 Forty-four teams - the maximum number - filled the Cromwell gymnasium for the Central Otago years 7 and 8 final. 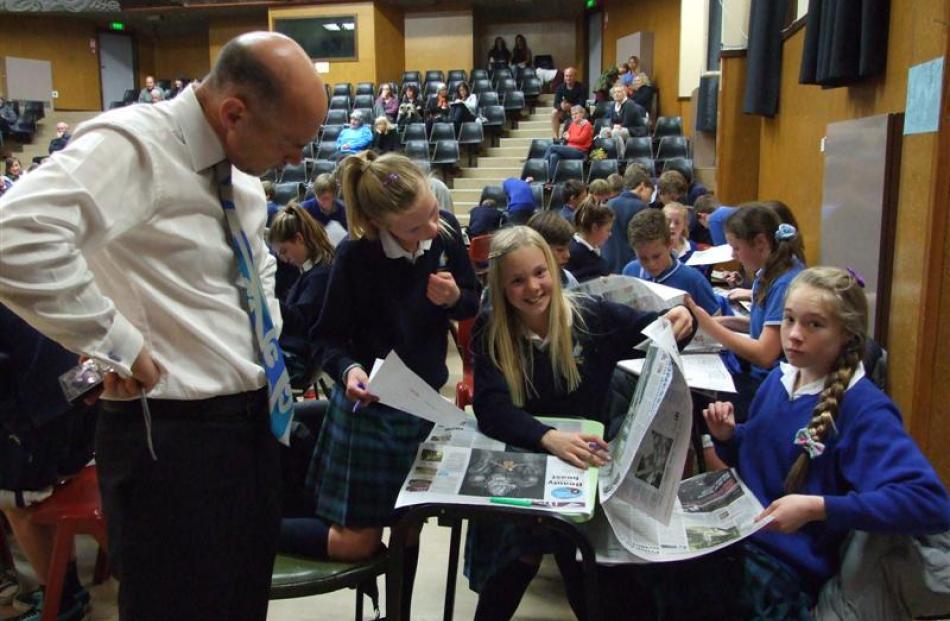 Cromwell College principal Mason Stetch keeps an eye on the progress of one of the college's teams (from left) Darcie Crowle, Laurel Williams, and Greta Bauer (all 13) as they complete a 'scavenger hunt' though the newspaper.

A Goldfields School team pulled out all the stops with a golden performance, only four points short of a perfect score, to become Extra! Central Otago current events quiz champions last night.

Jaide Dixon, Hunter Norton and Logan Pagan made up one of 32 teams in the years 5 and 6 regional final, which was staged in their home town of Cromwell. They said the quiz was fun but nerve-racking.

''We've been training for it for two months ... or like, a month at least,'' Hunter said. The trio's score of 96 out of 100 was the one of the highest recorded at the Central Otago current events quiz final, quiz co-ordinator and Extra! editor Ivan Behrnes said.

Another team from Goldfields tied with a Queenstown Primary School team on 92 points to claim second equal place.

Teams from all over the wider Central Otago, Wanaka and Queenstown district took part in the 10-round quiz and were tested on a wide range of topics which included geography, interpreting a cartoon, matching names of news makers to their photographs, and a ''scavenger hunt'' through the newspaper to find answers to one series of questions.

Later in the evening, 44 teams went through a similar process before Ryan Shields, Jackson Collier and Matthew Nevill, of Clyde School were announced the years 7 and 8 champions.

The three boys were pleased with their win and Jackson said: ''This is our revenge for coming second overall in the [Central Otago final of the Extra!] spelling quiz.''

They scored 93 and were only one point ahead of an Arrowtown School team, which tied with a team from The Terrace School in Alexandra for second place. Today is the turn of years 9 and 10 pupils and 32 teams will vie for the title of champion.

The quizzes are also staged in Dunedin, Christchurch and Timaru and more than 1300 pupils are involved.