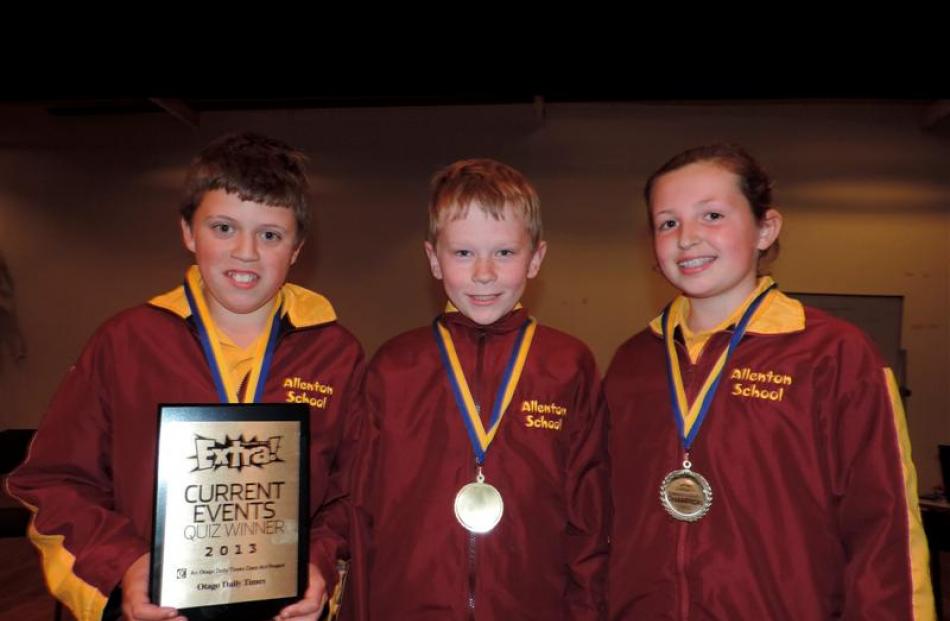 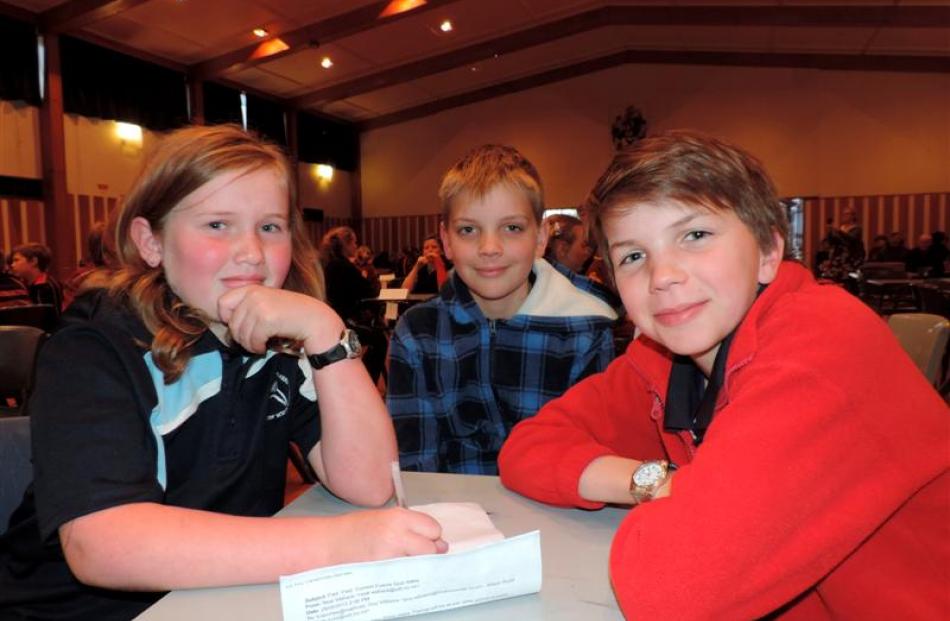 Mt Somers Springburn School's team 3 (from left) Sophie Adkins (9), Ben Schikker (11) and Angus Neal (10) get their first taste of a school quiz in the years 5 and 6 section. 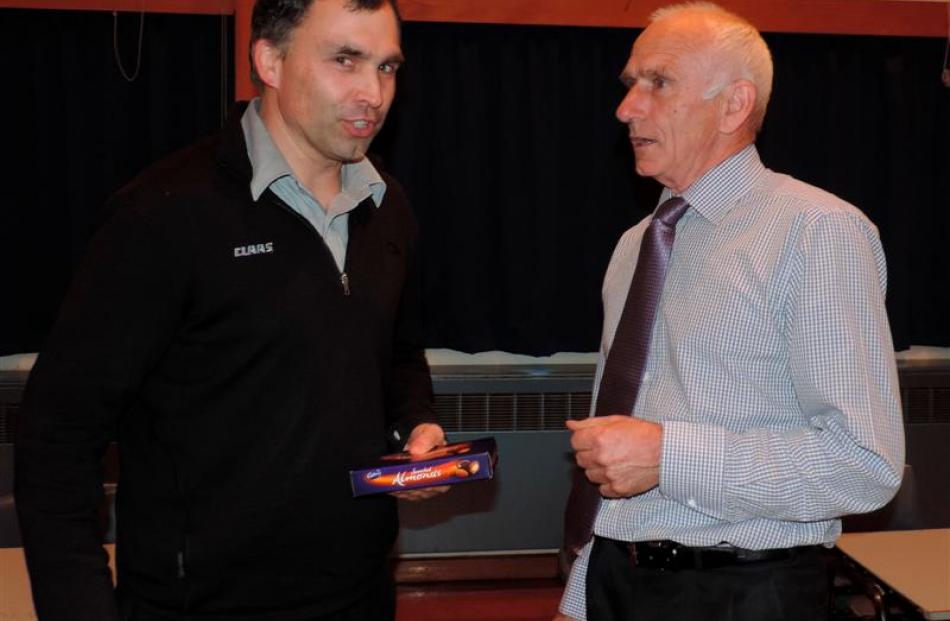 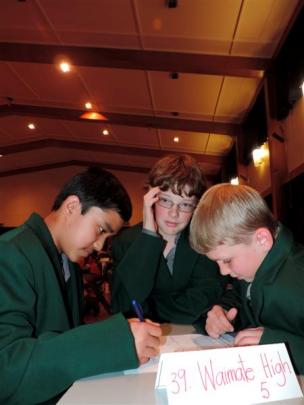 Waimate High School 5 (from left) Anmol Shrestha (11), Jack Clarkson (11) and Phoenix Middlemiss (11) consider their questions in the years 7 and 8 section. 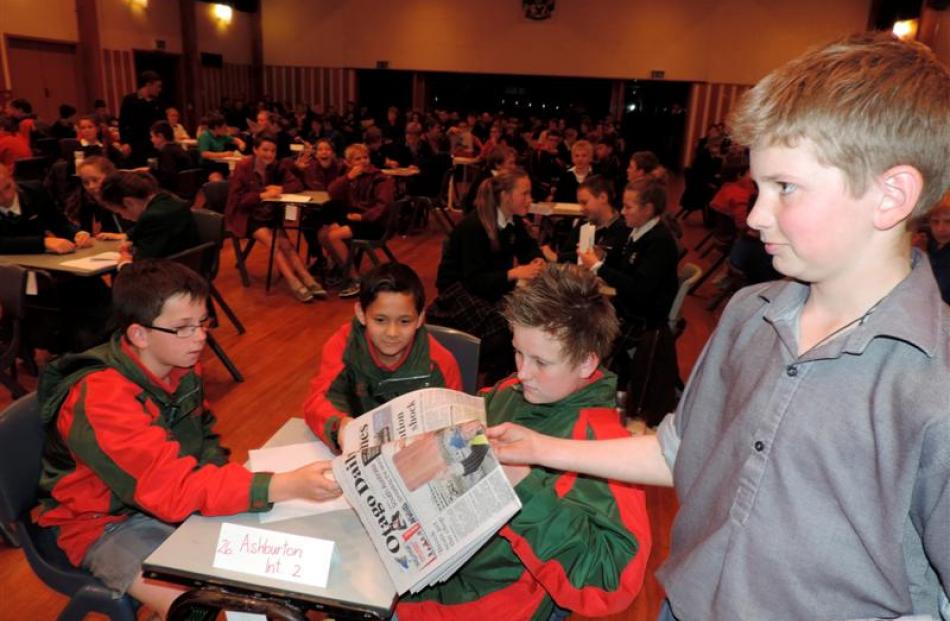 Timaru Boys' High School's Charlie Stock (13) hands a newspaper to the Ashburton Intermediate 2 team of (from left) Sam Bubb (12), Shannon Body (12) and Lachie Noonan (13) during the scavenger hunt round. 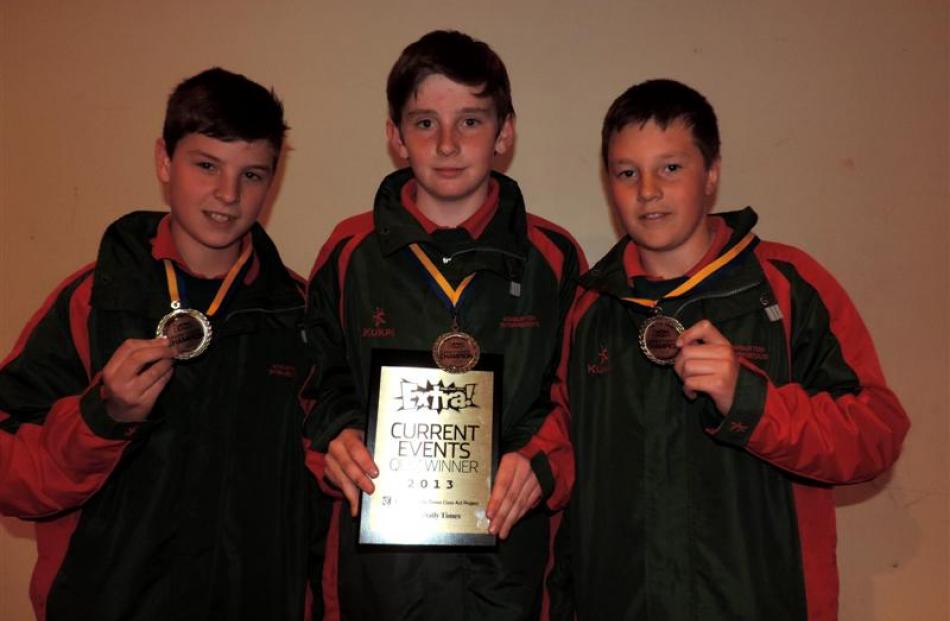 Team member Hamish Procter was pleased to get his first win on debut, but fellow team members Matthew Johnson and Glen McClea were even more pleased because they had been in last year's third placed team.

Third place was a hotly contested spot this year, with four teams tied in third position at the end of the 10-round competition. A playoff was necessary and the teams were asked: What was the subject of a recently announced referendum organised by the Greens and the Labour Party? Only two teams answered the question correctly - stopping the sale of state assets - with Timaru South School's team 1 and Mt Hutt School's team 2 sharing third place honours on 88 points.

Earlier in the evening, Ashburton's Allenton School's team 3 won the years 5 and 6 prize, after featuring in the top three teams from the end of round seven. Geraldine Primary School 1 came second and Ashburton Borough 1 came third equal with Mt Somers Springburn 1.

A total of 130 teams and 390 children from years 5 to 10 are taking part in the two-day quiz, which is the last of four regional quizzes throughout the lower South Island. The Xtra! Otago Daily Times quizzes are part of the newspaper's Class Act project, which celebrates the excellence of young people.

Tonight, at the same venue, pupils from high schools in Mid and South Canterbury will compete for the years 9 and 10 title. Extra! is a monthly educational publication produced by the newspaper for senior primary, intermediate and junior secondary school pupils.