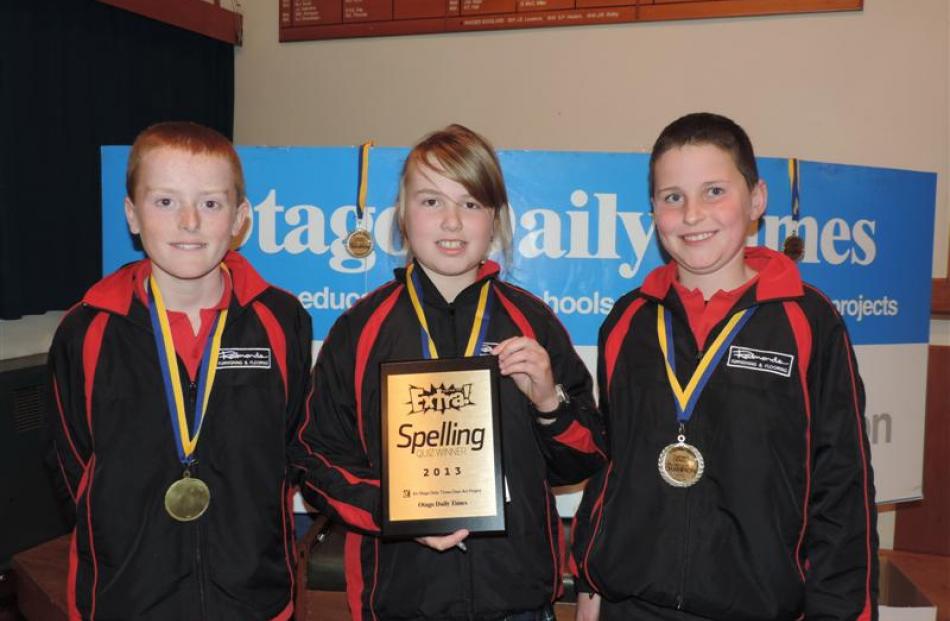 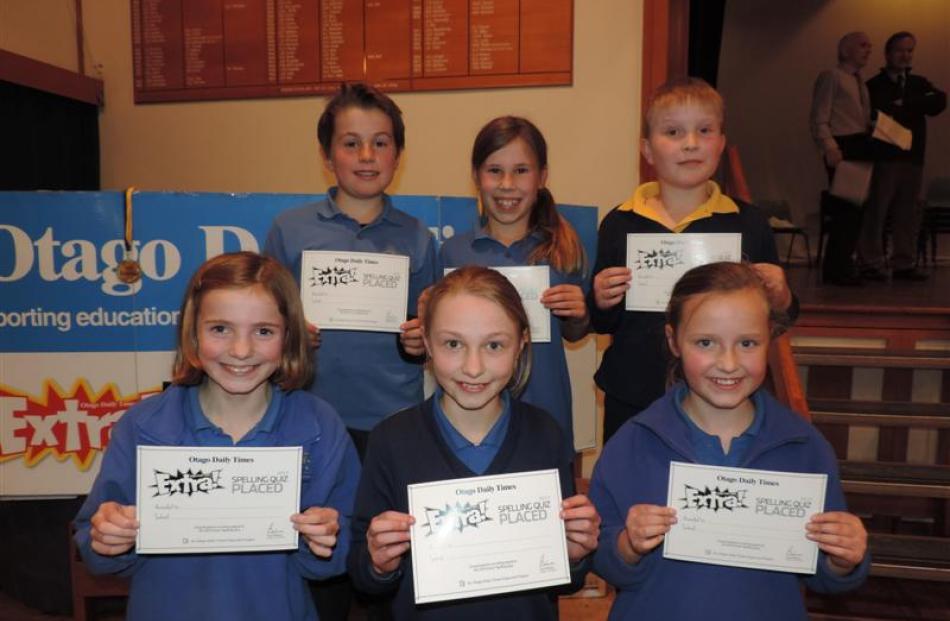 Two teams from one Oamaru school tied for second at the spelling quiz in Timaru last night. They were the Fenwick School 1 team of (rear, from left) Jake Gilchrist (10), Gracie Haywood (9) and Benjamin Brosnan (11), and the Fenwick School 2 team of ... 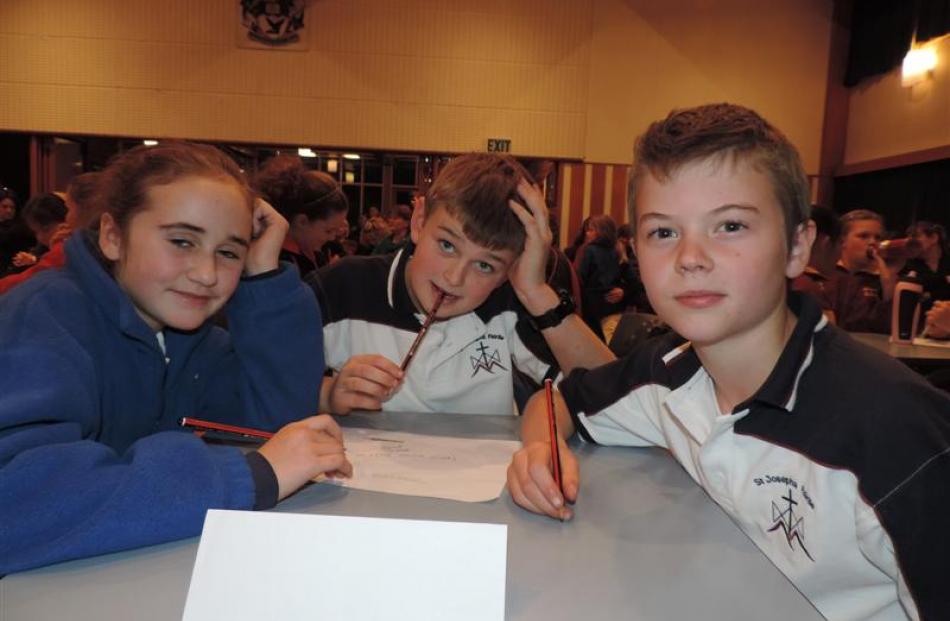 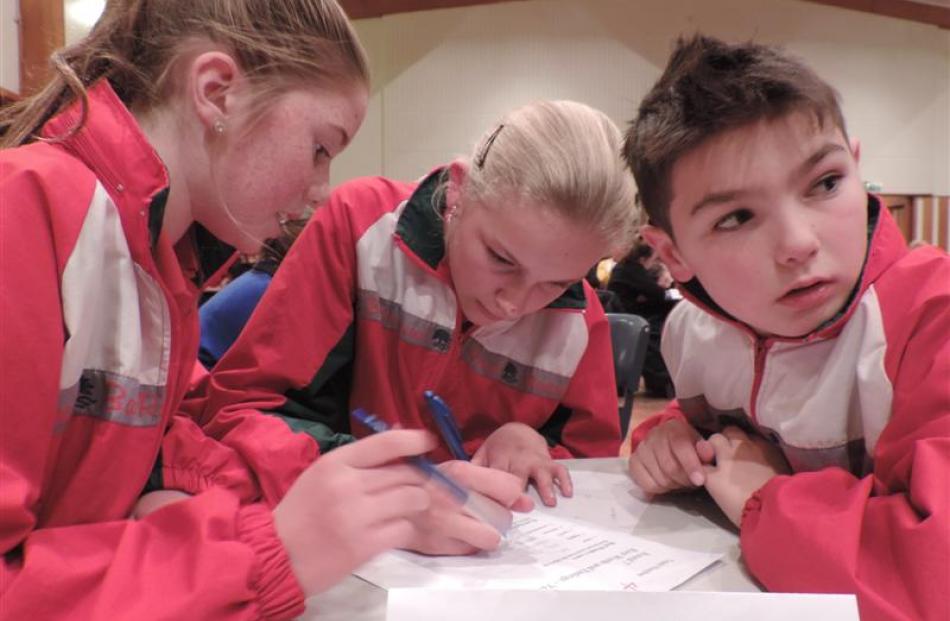 Hard at work and checking out the opposition last night are the Barton Rural School, Timaru, team of (from left) India Lane (11), Jade Horton (12) and Lincoln Cosgrave (11). Photo by Guy Williams. 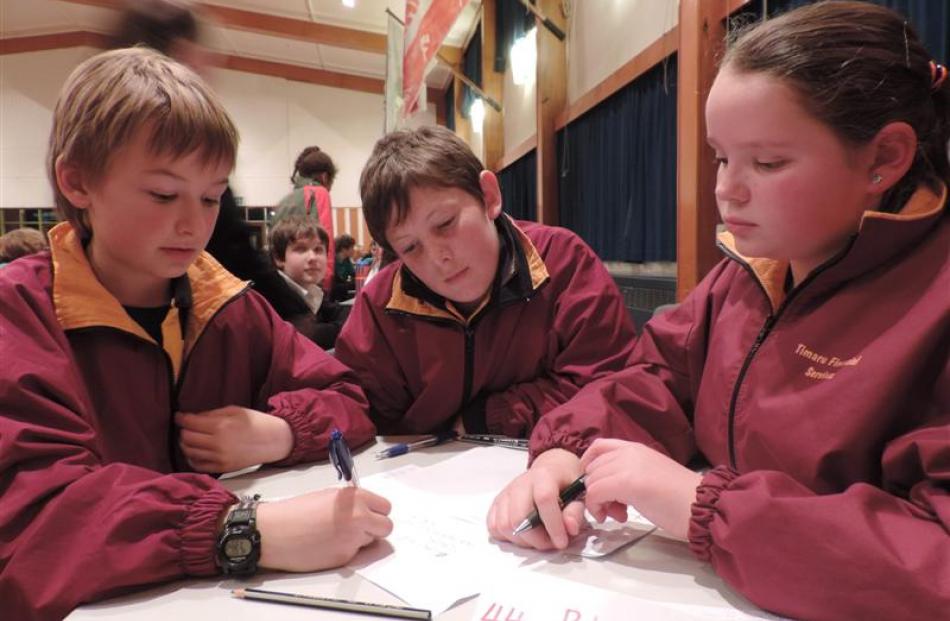 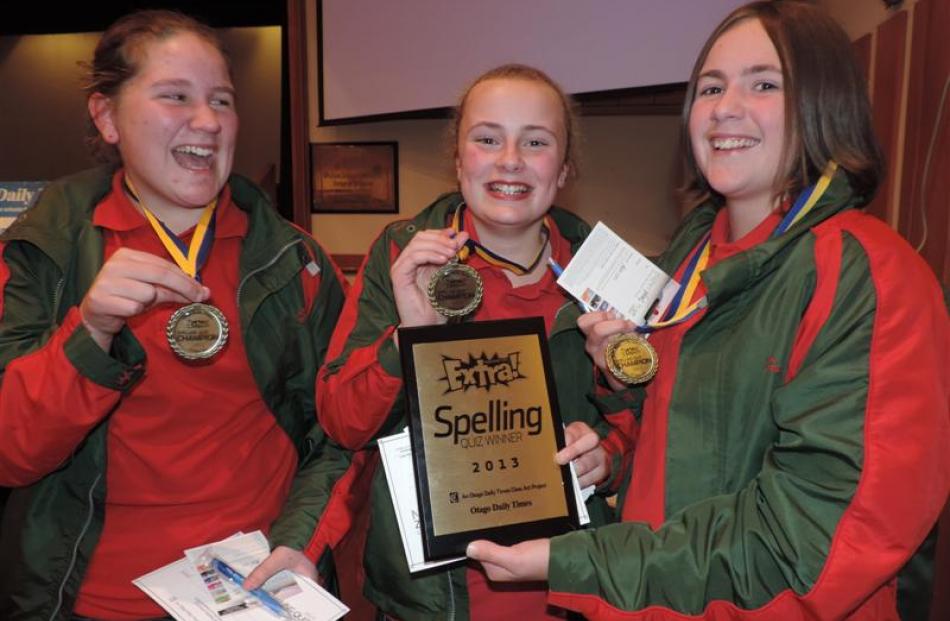 Delighted after a nail-biting win in the years 7 and 8 section of the spelling quiz at Timaru Boys' High School last night are the Ashburton Intermediate School 1 team of (from left) Georgia Naylor (12), Maisie Looij (11) and Josie Tallents (12). Photo...

An all-girl team from Ashburton Intermediate School broke clear of the pack in the final rounds to win the Otago Daily Times Extra! spelling quiz title for years 7 and 8 in Timaru last night.

Competing with nearly 50 teams from 23 schools from throughout North Otago, South Canterbury and Mid Canterbury, the team of Georgia Naylor, Maisie Looij and Josie Tallents won by a single point over two teams from Timaru's Gleniti School.

After 10 gruelling rounds, the Ashburton trio scored an impressive 98 points out of a 100. They credited their success to a combination of experience, luck and old-fashioned spelling skills.

Georgia said they knew what to expect during the quiz as they had all competed at least once before, so kept ''thinking positive'' and never gave up hope.

Josie said although they had done little practice, they shared good all-round knowledge, while team-mate Georgia was their spelling star.

Earlier in the evening, Ashburton Borough School claimed the years 5 and 6 title from the 38 teams competing. The school's No 1 team of Ben Nordquist, Leah Ford and Harry McMillan scored 97 points out of 100.

While Ben and Leah had not won a prize in the quiz before, it was two in a row for Harry, who was also in last September's victorious team.

Coming second equal on 95 points were two teams from Oamaru's Fenwick School, while no third place was awarded.

Although the Fenwick teams scored consistently well throughout the quiz, Ashburton Borough made a charge in the middle stages and took the lead from round 7.

More than 320 children from years 5 to 10 are taking part in the two-day quiz, which is the third of four regional quizzes throughout the lower South Island. The final quiz will be held in Christchurch at the end of the month.

Tonight, at the same venue, pupils from Mid and South Canterbury will compete for the years 9 and 10 title.