Kowhai will be sixth power station on river 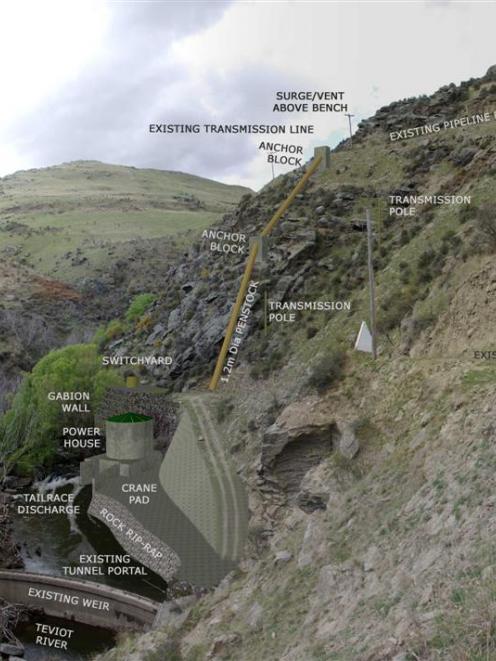 The Kowhai station should be operational by next May and generate a maximum of 1.9MW. It will be the company's sixth power station on the Teviot.

Pioneer Generation chief executive Peter Dowling declined to reveal the cost of the project but said the station would make a "significant contribution" to the amount of electrical energy produced in the Roxburgh and Alexandra area.

"It's needed to keep up with the growth in the region."

The Kowhai station, named after trees in the area, received the appropriate planning consents from the Otago Regional Council and Central Otago District Council and was dealt with as a non-notified application.

It is located 3.5km east of Roxburgh and will use water from the Marslin dam, taking the water, via a 1.3km pipeline, down a penstock to the generating station on the banks of the Teviot River.

The company owns and operates 12 power stations throughout Central Otago and Southland. The others on the Teviot, with the maximum generation output, are: Ellis (7.8MW), Horseshoe Bend (4.3MW), Michelle (1.6MW), George (1MW) and Teviot Bridge (1.1MW).

"Wind power is quicker to develop than a hydro power station."

It was about to add three wind turbines to its Horseshoe Bend power station. They should be installed and commissioned by September.

Mr Dowling said in the "olden days", the aim was to have 50% of an area's power generated in that area.

"That was seen as the ideal and we might have moved away a bit from that, so that's what we're aiming for."

The company had considered, for many years, the possibility of a hydro scheme on the Nevis River.

An application to amend the existing water conservation order on the river is the subject of a month-long hearing, which began in Cromwell last week. If successful, the amendment would prohibit dams being built on the river, or the water being diverted.