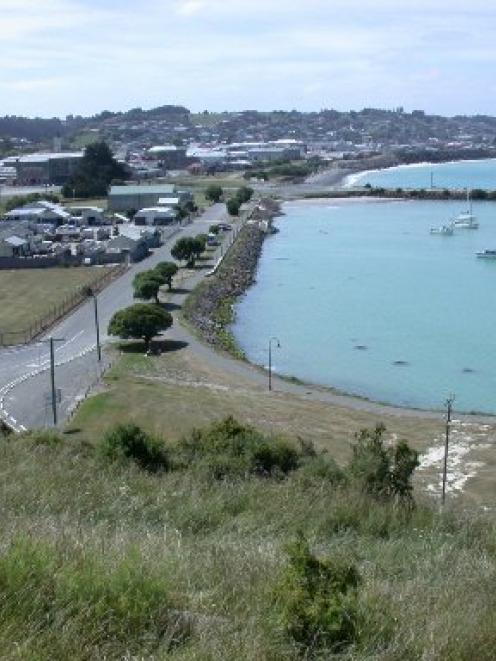 Part of the Oamaru Harbourside area showing the former railways goods yard (left), now owned by the Waitaki District Council; Marine Pde, Friendly Bay and Holmes Wharf (centre), looking north to the railway station. Photo by David Bruce.
Until recently a costly relic of what was once a thriving port, the Oamaru Harbour is again vital to the future of Oamaru, David Bruce reports.

Oamaru, like many New Zealand coastal towns, was built around its harbour.

From the 1860s, when runholders arrived followed by gold-miners, the port was the town's major link with the outside world.

It was an energetic, thriving place, even more so after construction started on the breakwater, then new wharves over the next 30 years.

For a brief period in the 1980s, it looked like being resurrected to ship cement from a proposed new plant near Weston, but that did not eventuate.

Instead, it became a financial drain on ratepayers, used mainly by fishing boats and for recreation.

It has been revived by tourism to the Oamaru Blue Penguin Colony, a new restaurant complex and plans, yet to to come to fruition, for apartments in old wool store buildings.

The historic "red sheds", built of corrugated iron, are home to artisans.

In contrast to the neighbouring Victorian town historic precinct, Oamaru's original town centre before it moved north into Thames St, the harbour has remained a hotch-potch of promise.

Over the past 22 years, 12 reports have looked at ways to transform it, building on its classification by the New Zealand Historic Places Trust as a historic area.

Some work has started. The biggest project has been extending Wansbeck St into a cul-de-sac at the end of Holmes Wharf.

Marine Pde along the foreshore is being rejuvenated and a cycleway built which will form the end of the 313km-long Alps 2 Ocean cycleway from Mt Cook.

But there is still the feeling of a piecemeal approach, even though the Waitaki District Council's harbour subcommittee adopted, in principle, a development strategy by Oamaru resident Dugal Armour, who has had a long-term interest in the harbour area.

A harbourside precinct subcommittee has also been established, covering the harbour area, the former railways goods yard which the council bought as a reserve, and the foreshore north past the old freezer building.

Now, that subcommittee wants to prepare a harbourside development strategy which will set a vision and plan in place over a nine-year period.

The Armour report, prepared in 2007, contained a three-stage strategy.

Some of that work has been completed, but by picking projects from each of the three stages rather than following along in sequential order.

Then some second and third stage projects were plunged into, such as esplanade lighting along Marine Pde, reinstatement of the esplanade and links to the central Oamaru business district.

The new harbourside development strategy will be prepared in consultation with groups and individuals who have an interest in the area.

It will start to take shape early next year as a draft proposal.

It will schedule projects and look at costs, including what money is already available from the council, what can be paid by ratepayers and sources of grants that may be available.

Developing the area has been made easier by the council now having control of most of the land in the harbourside precinct, especially the railway goods yard which is key to any plans.

So what are the most urgent projects that will have to be built into the strategy?

One is establishing a campervan park close to the harbour, which has already attracted interest from a holiday park operator.

A likely site is somewhere on the railway goods yard land.

Camping in the harbour area and on the goods yard is banned, but it is not unusual to see tourists ignoring that.

Most of that work involves landscaping and car parking areas.

Further landscaping around the Wansbeck St extension and restoring the old, wooden pedestrian railway overbridge is on the list.

Providing a home for the steampunk movement and possibly instigating a farmers market are some ideas being suggested.

The restoration of Sumpter Wharf is needed but may not be a priority because of the cost.

It is fenced off and closed to the public because its decking is dangerous.

The aim is to again make the harbour a focal point for Oamaru, this time generating economic growth not through shipping but tourism.