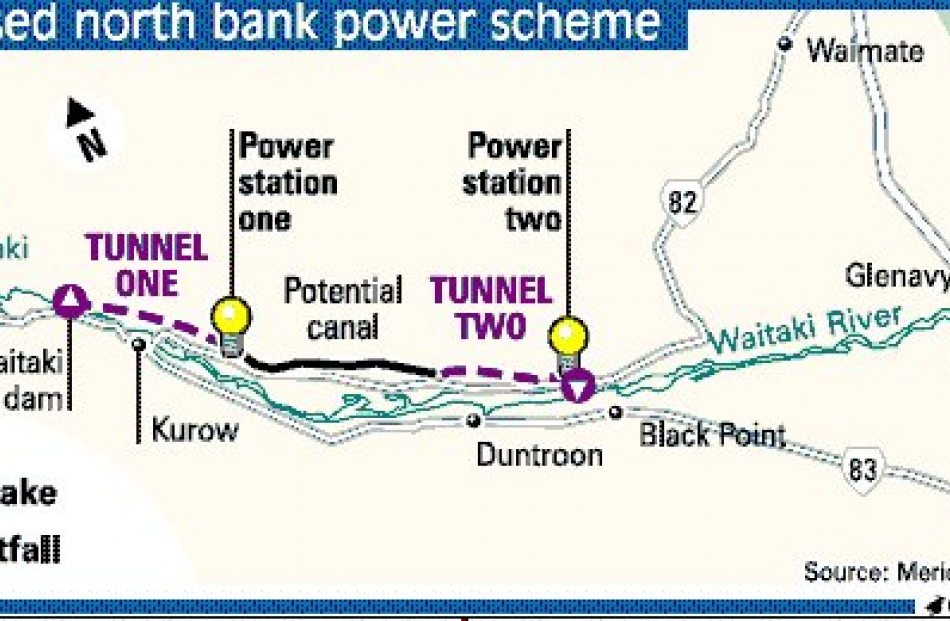 Geological issues have led to a rethink of a proposed major new power scheme on the lower Waitaki River.

Meridian Energy Ltd is recasting the design of the scheme after an extensive feasibility study lasting more than a year showed up the problems.

The north bank tunnel scheme between the Waitaki dam and Stonewall was to have cost between $900 million and $1 billion to build a 34km-long tunnel with one power station.

It already has four resource consents from Environment Canterbury (ECan) for water for the scheme, but still has to apply to the Waimate District Council for land-use consents to build and operate it.

Now the company is consulting landowners and stakeholders about a different design - a combined tunnel and canal with two power stations - to avoid challenges it faced with some of the rock around the middle of the scheme.

Project development manager Charlie Watts said yesterday preliminary discussions had been held with land owners and stakeholders on Monday and Tuesday to identify a possible route for the canal section, as well as continuing overall technical investigations for the scheme.

"We'll be taking the time to work with others to ensure that we get it right," he said.

Once that was completed, it would then apply for the land-use consents.

Meridian has been working on the north bank scheme since it cancelled Project Aqua at the end of March 2004.

In June last year it started an engineering feasibility study to firm up the design and cost of the scheme, which also included drilling 28 holes up to 150m deep along the tunnel route.

The drilling found faulted rock and faultlines in the middle section which would have been difficult to tunnel around.

Meridian is now proposing a 12km tunnel from the Waitaki dam, then a canal with a base about 100m wide.

The 13km-long canal would hug the foothills north of State Highway 82, then re-enter the end tunnel.

Two power stations were being proposed for the revised scheme: at the exit from the first tunnel and at the final outfall.

Mr Watts said costs of the alternative would not be finalised until Meridian had completed detailed design, but it would be more than $1 billion.