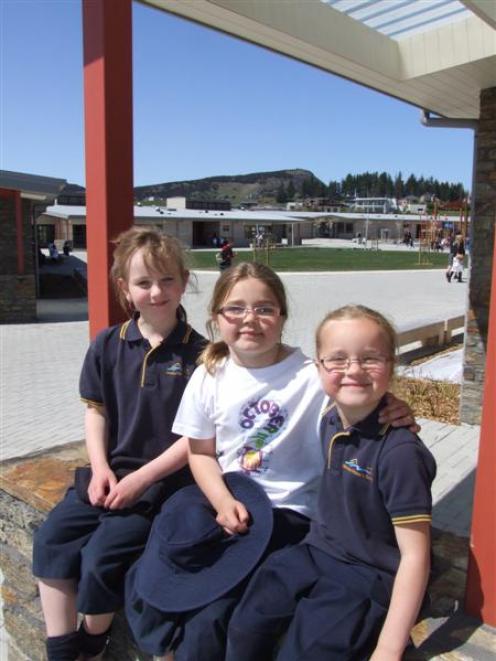 While Zoe Frazer (5) had her older sister Maddison (7) to show her the ropes on her first day, they were both coming to grips with the new surroundings.

The best thing about the new school was the three playgrounds, they said, which are spread out around the spacious paved and landscaped grounds.

Zoe was joined by eight other new entrants, as part of a select group of pupils whose first day coincided with the start of classes at the new school.

Zoe, Maddison, and their friend Madi Loudon (6) were among the 430 pupils who were also getting to know their new classrooms and flash surroundings.

Many pupils were wearing T-shirts they had designed, which were produced by the Wanaka Primary School Future Trust to commemorate the first day.

First-year teacher Laetitia Davies said it was not just the pupils who were enjoying the new campus, after the school relocated during the holidays from its former site in Tenby St.

"I can't quite find the words to describe how it is to finally be here.

"It's almost surreal, because we have been planning and getting ready for this day for a long time.

"It's a relief to get here. It opens up so many [teaching] opportunities," she said of the state-of-the art facilities.

"We've got to take this wonderful campus forward and utilise these new facilities and its fantastic technology to challenge ourselves to be the best we can," she said.

It is hoped building would start on a new school hall next month at the southern end of the campus, she said.

Waitaki MP Jacqui Dean was also present to mark the first day of the new school.

An official opening is planned for next year.

Mrs Dean paid tribute to the "hard slog" put in by members of the school's board of trustees, who had pushed and worked towards their common goal.

She encouraged the pupils to "have a great time . . .

You'll be joined by lots and lots of new children, because you are now one of the great schools in the South Island."

Board of trustees chairman Pete Bullen told the pupils they were a special group, because very few children ever got the chance to experience the beginning of a new school.