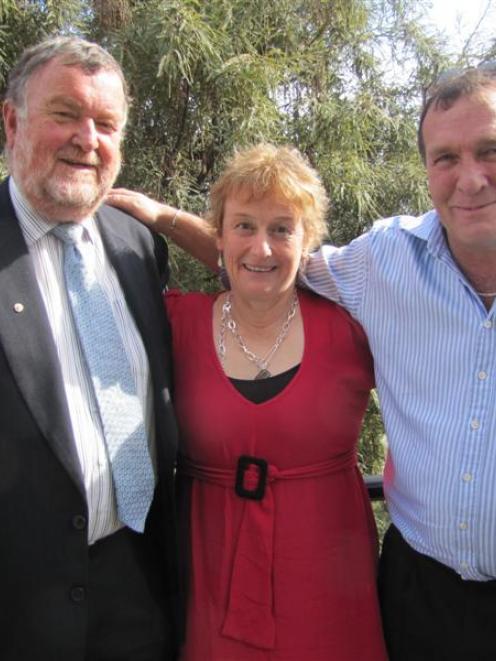 All three are from Queenstown.

There has been no Wanaka mayoral candidate since amalgamation under local body reform in 1989.

Deputy mayor John S. Wilson, of Wanaka, was a mayoral aspirant but recently withdrew his nomination for personal reasons.

Mr Scott confessed he was unfamiliar with some of Wanaka's issues but was keen to serve the entire district.

It was time to "get rid of that line on the hill".

"We are all uniquely our own, but we should be all workingas one," he said.

When asked by Albert Town resident Bruce Hebbard to choose either a greenfields or camping ground site for new sports facilities, all three said the community should decide.

However, Mr Hayes said if asked for a long term option, he would vote greenfields.

Ms van Uden also supported greenfields, subject to the council's reaching an agreement with the landowner.

Festival of Colour co-ordinator Lindsay Schofield asked how they would support events.

Ms van Uden said although the council should not be running events, it should "sweat the small stuff" and make things easier for event managers.

There should be a contestable fund, "although that's not to say there will be a huge bucket of money".

The trio had difficulty narrowing campaign issues to three as requested by forum chairman and ODT editor Murray Kirkness.

Things like visitor industry demands on infrastructure and the district's roading needs also needed to be addressed, he said.

The council had to spend carefully and work with the community to prioritise its needs, he said.