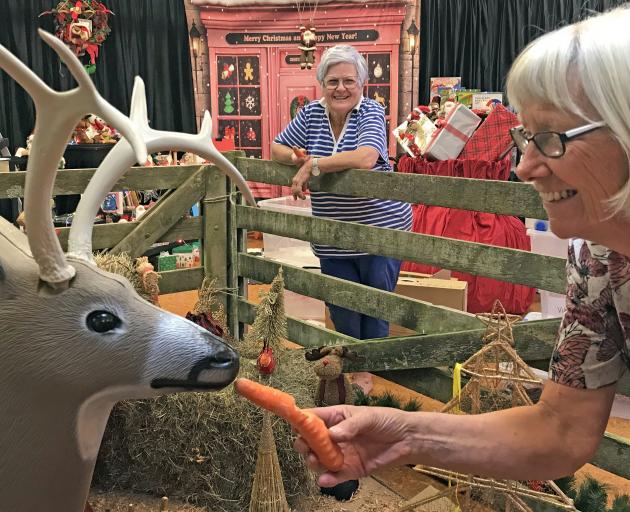 North Pole assistants Elizabeth Horrell (front, feeding the reindeer) and Barbara Mackenzie at the Lake Hawea Community Centre. PHOTO: MARJORIE COOK
Santa has not cancelled his talk with Lake Hawea children this month. He is just coming by Zoom.

He will also send at least 70 elves, 25 teddies, Mrs Claus and a colony of inebriated rabbits as his advance party.

Santa’s Christmas team began setting up North Pole inside the Lake Hawea Community Centre on Monday and will receive their first guests from 5pm today.

Elizabeth Horrell, Barbara Mackenzie and several helpers have been working from dawn to dusk all week at the southern version of North Pole.

"This morning I had a count up, and over 170 hours have gone into it over three days. There are three of us here and I started at 6.30am. Tomorrow we would like to be finished at 4pm because it opens at 5pm. By then, well over 200 hours would have gone into it," Mrs Horrell said.

Mrs Mackenzie, a keen craftswoman, made all the elves and teddies.

The women have been making various versions of the North Pole for about eight years.

This is the third year they have set up North Pole at the community centre.

Grotto at the Wanaka Community Hub.

Santa cannot personally come to Wanaka either, but Mrs Claus had been there since November 27.