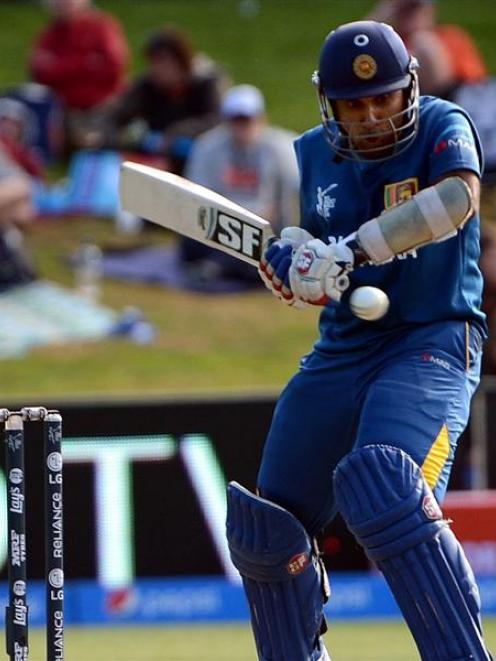 Sri Lanka batsman Mahela Jayawardene on his way to a century against Afghanistan in their World Cup match at the University Oval in Dunedin yesterday. Photo by Peter McIntosh.
Thirty more runs may have made the world of difference for Afghanistan.

The Afghans bowled with potency but a lack of firepower with the bat perhaps ultimately cost the World Cup debutants a surprise victory against Sri Lanka in their Pool A game in Dunedin yesterday.

Having got into a relatively sound position at 169 for four, the Afghans faltered and were eventually dismissed for a disappointing 232.

Former Sri Lankan captain Mahela Jayawardene guided his side to a four wicket triumph with a fine century his 19th ODI ton.

Victory was not without tension, though. A crowd of 2711 watched as Sri Lanka made the worst possible start, losing opener Lahiru Thirimanne lbw first ball and then Tillakaratne Dilshan, also without scoring.

It was only the second time in ODI history both openers recorded first ball ducks.

Kumar Sangakkara really should have been run out moments later. It mattered not, because he was bowled for seven and watched as the bowler Hamid Hassan celebrated with a part cartwheel part high speed forward roll. It is unclear whether the clip has gone viral yet but there was a comical element to the display.

There was more extravagant celebration when Dimuth Karunaratne (23) gave some catching practice to Mangal in the slips. This time the headband clad fast bowler got down on one knee and looked skyward with his arms splayed.

It was a great moment for the Afghans. Sri Lanka had slumped to 51 for four.

But Jayawardene and the skipper Angelo Mathews gradually rebuilt the innings. The pair added 126 runs in what proved to be a match defining partnership.

The Sri Lankan section of the crowd greeted Jayawardene's ton with a not so raucous round of song.

They had been silenced moments earlier when Mathews was run out for 44. And when Jayawardene guided a catch to third man, the match appeared to have another twist waiting.

''It is early stages in the World Cup and yes, it is a bit of a hiccup,'' Jayawardene said.

''But we managed to get ourselves two points on the board. We just have to make sure that we take each game very seriously.''

''I enjoyed that hundred as if it was a World Cup final hundred. It was just a tough situation and we had to be really strong out there.''

With Jayawardene's dismissal, Hassan had taken three wickets and was revved up. But there was no further calamity for Sri Lanka.

The outcome may have been different had Afghanistan been able to capitalise on a solid opening 35 overs.

The second batting power player proved decisive, but not for the batting side. Afghanistan netted just 10 runs and it cost the princely sum of two wickets.

The last 10 overs yielded more wickets, dots and singles than fours or sixes.

''I think we played very well, but I think we were just missing 30 runs,'' Afghanistan all rounder Samiullah Shenwari said.

''Our bowlers did very well. They were on 20 runs for three wickets and then 50 runs for four wickets. So it was a good chance to beat Sri Lanka but Mahela and Mathews take away the match.''

Afghanistan's next assignment is against Scotland in Dunedin on Thursday and Sri Lanka plays Bangladesh in Melbourne the same day.