Cricket: NZ out to maintain momentum 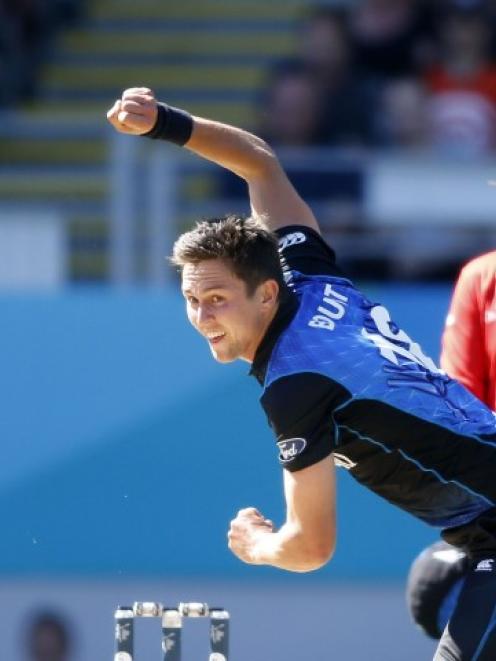 Trent Boult. Photo Reuters
Paceman Trent Boult says there is plenty of motivation in the Black Caps camp to finish off their cricket World Cup pool programme in style.

New Zealand face Bangladesh in Hamilton on Friday, with both teams already qualified for the quarter-finals.

The Black Caps booked their spot with a 100 percent record from their five matches so far.

Bangladesh clinched their berth in Adelaide on Monday with a 15-run upset that ensured England will go home early.

But Boult doesn't believe the fact that both teams are into the last eight will take any edge off their encounter at Seddon Park.

"Everyone is pretty pumped to be here," he said.

"It's a great opportunity to finish off a pretty good campaign so far. There's a lot of motivation in the side and we're all looking forward to it."

Boult admitted to surprise over the early demise of England, whom New Zealand thumped by eight wickets in Wellington.

"They're full of world-class players and everyone knows they have been having a bit of a tough time," he said.

"It's a bit of a shame for them to be knocked out already, but it doesn't have too much to do with us. We'll focus on us."

Left-armer Boult has been part of an impressive bowling attack that has helped the Black Caps to the top of pool A.

New Zealand have bowled out every one of their opponents so far, dismissing the big two of England and Australia before either innings reached 34 overs.

Boult and fellow swing bowler Tim Southee lead the tournament's wicket-takers with 13 each.

"It's pretty cool to have three ND guys up at the top," Boult said.

"Dan's been bowling extremely well and Timmy as well.

"There's lot of cricket to be played, so hopefully there's a few more wickets in the tank."

The Black Caps have Tuesday off before regrouping on Wednesday.

Boult has escaped the illness that struck the team after their win over Afghanistan in Napier on Sunday.

Boult, who was out playing golf on Monday, said he didn't have a medical update but was confident everyone would be right by game time.

"It was just something coming through," he said.