Cricket: Vettori could be key in Wellington 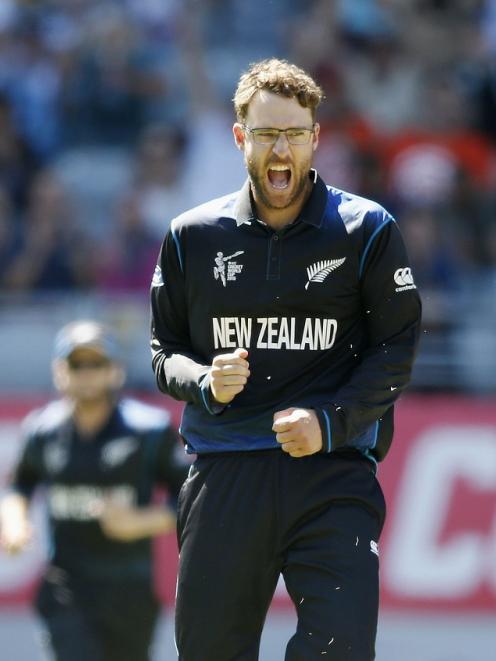 Daniel Vettori: 'I think the boundaries bring spinners in. I always like bowling with boundaries that are long and straight.'
It's meant to be all about the seamers at Wellington Regional Stadium.

Tim Southee tore through England last month with 7-33 and his three best one-day international bowling figures have come at the venue.

Pace dominated this summer's other two fixtures against Pakistan and Sri Lanka in Wellington where New Zealand's spinners didn't take a wicket.

However, Daniel Vettori has enjoyed continued success with less fanfare in the capital, extending back to the ground's debut in January 2000.

He's played 20 ODIs there for 20 wickets but the crucial statistic is his economy rate: 3.80.

Vettori's role in the New Zealand side at the World Cup is to tighten the screws to build pressure. The dimensions of Wellington Regional Stadium allow him to do so.

"I think the boundaries bring spinners in. I always like bowling with boundaries that are long and straight," Vettori said.

"You can be an attacking force in a ground like that. I think the wicket's changed a lot over the years. It used to be a little bit slow and now it's a pretty good wicket. There's definitely something there for spinners."

Vettori will be a key figure in New Zealand's line-up when they meet the West Indies in their quarter-final in Wellington on Saturday.

The Black Caps enjoyed a day off yesterday but are due to push through a lengthy training session today as they continue their quest for a maiden World Cup crown.

Vettori, who has been part of four unsuccessful World Cup tilts with New Zealand, said playing on home soil gave this tournament an extra edge.

"There's a real excitement around New Zealand. It's probably something I haven't seen and I think having a World Cup at home, people are so excited about that," he said.

"The fact that we are playing well means people are really supporting us. There's something a little bit extra there because of that."